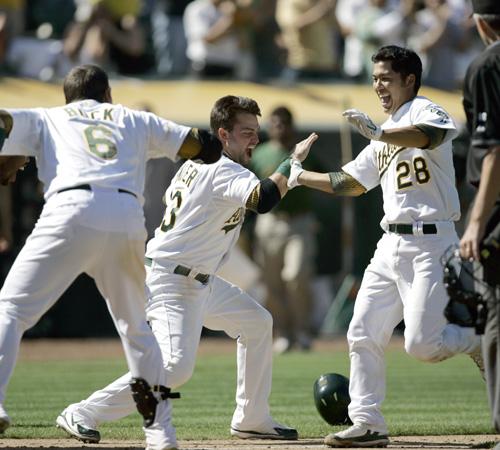 OAKLAND, Calif. – Mike Piazza moved down a spot to fifth in the order for the first time all season, and it worked out well for the Oakland Athletics.

So did going to closer Huston Street in the ninth inning.

Piazza broke a scoreless tie with an RBI single in the fourth and Kurt Suzuki hit a two-run homer, leading the A’s past the stumbling Chicago White Sox 3-2 on Wednesday night.

But seeing Street save a game while pitching for the third straight day was perhaps the biggest deal for Oakland in its latest victory.

The 2005 AL Rookie of the Year struck out the side in order for his first save since May 6 at Tampa Bay and 10th save in 12 chances overall. He was on the disabled list from May 15 to July 23 with nerve irritation in his right elbow.

It didn’t matter that he used what he described as “a spinning slider” to retire pinch-hitter Jim Thome on a 3-2 pitch to end it. He also threw a 1-2 changeup that he called his best such pitch of the season.

“It can’t go better any time when you strike out the side,” Street said of his 12th outing since coming off the DL. “I’ll take it.”

Joe Blanton won his second straight decision with just his second victory in his last eight starts for the defending AL West champion A’s, who have their first three-game winning streak since June 13-15 during interleague play.

Jack Hannahan doubled for his first major league hit leading off the bottom of the fifth for Oakland. Acquired in a minor league trade with the Detroit Tigers on Tuesday, Hannahan had been 0-for-13 in his previous big league at-bats.

Mark Buehrle didn’t allow a hit until Nick Swisher’s one-out double down the left-field line in the fourth, but the Chicago offense couldn’t do much as the White Sox went on to their fourth straight defeat.

The struggling Piazza singled in Swisher two batters later, just the second hit in 20 at-bats for the designated hitter. Piazza has 44 starts in the cleanup hole and two in the third spot this season, his first with Oakland.

“It worked out all right,” said Piazza, who like Street is still finding his rhythm after a long DL stint. “I could get better swings. But we’re playing well. I’ve had some quality at-bats in good situations.”

Chicago’s four-game road winning streak ended with a 4-3 loss Tuesday night. The club is trying to win the season series against the A’s for the first time since going 6-3 in 2000, but will have to take the series finale Thursday to do so. The teams are even at 4-4 this year.

Buehrle (9-8) cruised until the fourth, then faced trouble in each inning the rest of the way. The left-hander gave up three runs and seven hits in seven innings, struck out four and walked three.

Blanton had dropped four straight decisions before winning his last two. He won consecutive decisions for the first time since getting three straight from June 13 to July 3.

His bullpen nearly blew this opportunity.

Alan Embree allowed a one-out triple to Jerry Owens and then Josh Fields’ sacrifice fly one batter later in the eighth. After Jermaine Dye’s single, Paul Konerko followed with an RBI double before Darin Erstad grounded out to end the inning.

Then Street took care of the rest.

He had been asking manager Bob Geren when he might return to using him in the ninth inning. The skipper asked him if he was OK to pitch for the third straight game, and Street was more than willing to do it.

“I’m sore, man,” Street said. “Three days in a row, it’s the first time in three months for that. It’s just good to be out there. A one-run game and three days in a row, that’s pretty much the ultimate test after 2« months. It’s been a long time. I’ve been waiting for it. There’s still going to be a little bit of a transition period.”

Chicago closer Bobby Jenks was available to pitch after being held out Tuesday night, a day after tweaking his right ankle while walking his dog at home during Monday’s off day.