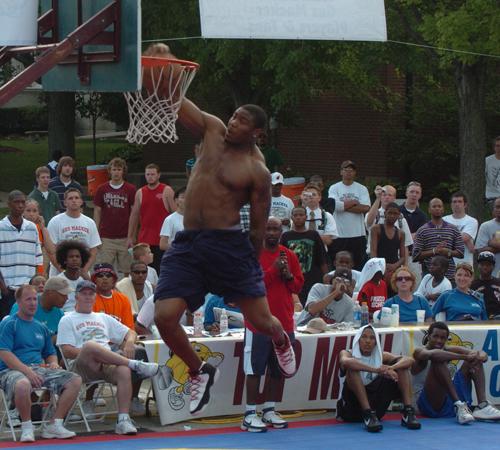 Illinois football player Jeff Cumberland throws down a dunk during the slam dunk contest at the Gus Macker 3-on-3 Tournament in Champaign on Saturday. Cumberland won the contest. Steve Contorno

This weekend marked the second straight year the Gus Macker 3-on-3 Basketball Tournament came to the streets of downtown Champaign. It was also the venue for the second annual Jeff Cumberland dunk-a-thon.

The junior receiver on the Illinois football team won the slam dunk contest Saturday evening to defend his crown after winning the event last year. The competition – roughly a dozen other participants – was much tougher in 2008 as Cumberland was forced into three overtimes before he eventually won.

Last season, Cumberland switched from tight end to receiver with success, scoring three touchdowns and recording Illinois’ first 100-yard receiving game since 2005. But a switch to hardwood might make sense after his performance Saturday, and Cumberland admitted he had given it some thought.

“I was gonna try out this year but I had foot surgery so I didn’t get a chance to do it,” he said.

Cumberland and his teammates were working the tournament as judges and referees, but his teammates remained spectators during Cumberlands performance. Some of them were coaches too.

“(I asked my teammates for ideas at the end because) I didn’t have a clue what to do,” Cumberland said. “So I was asking what would the crowd like the best. So whatever they told me to do, I did. Some stuff I did for the first time today.”

Cumberland initially missed his dunks in the first round, but the crowd voted him into the second round, undoubtedly based on his past record in the event. He didn’t disappoint in the later rounds, impressing spectators with between the leg maneuvers and spinning 360 degrees in the air. At one point, Cumberland was advised to throw down a dunk so hard it would take down the rim. But he relented when the emcee begged him to leave the hoop intact, knowing very well Cumberland probably could.

Despite his acrobatic dunks, Cumberland said there was no worry of being injured and jeopardizing the season.

“It’s really not much. It’s just jumping. I jump all the time,” Cumberland said. “I don’t do nothing for me to hurt myself with. Jumping over bikes, even though I know I can do it but I don’t do stuff like that for a chance to get hurt.” One of the contestants did jump over a bike.

Cumberland said he would donate the winnings, $350, to charity.