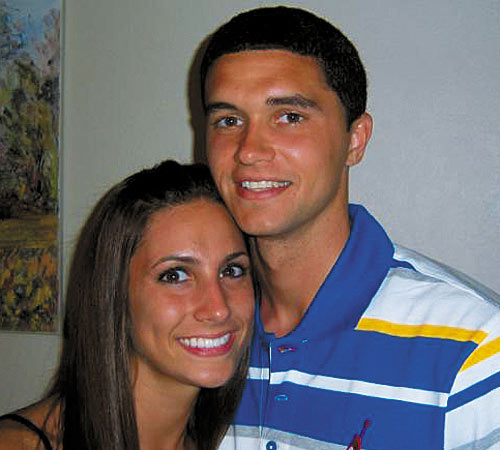 Trent Meacham and Theresa Lisch spent their first date in an unconventional location. They passed up the movie theater, the coffee shop and all the restaurants and headed to the basketball court.

The two first played a game of H-O-R-S-E. Lisch swept the first round and only lost one shot in the second round. But Meacham recovered winning the next contest, a game of one-on-one. Trent and Theresa acted more like adversaries than mutual admirers on their first date.

“She was competitive,” Trent said. “She was playing hard, so I liked that.”

Fast forward a year, and Theresa and Trent are engaged to be married. Both love basketball and each other, but the passions have no immediate correlation. Rather, basketball was simply a catalyst to finding each other and serves as just another side conversation in their daily phone calls.

Theresa didn’t suspect anything different during her visit to Champaign on Sept. 13. Some friends told her they thought Trent was quieter and more nervous than usual. But Theresa couldn’t see it. It just seemed like every other weekend they saw each other.

The two walked down the Quad and sat down to chat by the Eternal Flame, the Class of 1912 monument located between Lincoln Hall and the English Building. A campus myth says that lovers who kiss beneath the Eternal Flame will have a long and happy relationship.

After a couple minutes of conversation, Trent bent down on one knee and pulled out the ring, a band with a princess cut diamond surrounded by a halo of smaller diamonds.

Meacham said it took him “a while to get down on one knee” but said his marriage proposal turned out perfectly.

“I didn’t want to do anything public or anything,” Trent said. “It didn’t have to be anything spectacular, but it was really nice. It was just the two of us.”

But the union of Trent and Theresa almost didn’t come to pass.

Trent befriended Kevin Lisch, a St. Louis University men’s basketball player, during a basketball tour of France with Athletes in Action in August 2006. Trent stayed in touch with Kevin after the tour and started to hear from mutual acquaintances that he should meet Kevin’s sister, Theresa.

Trent hesitated and put off a meeting. But friends, including former Illini basketball player Steve Holdren, kept urging him. He had to meet Theresa, they said. Theresa, who had heard Trent was a great guy from mutual friends, pushed for a meeting behind the scenes.

“I was probably the one urging people to meet him,” Theresa said. “I was the one more wanting to meet him.”

Trent relented and met Theresa when he visited Kevin in St. Louis.

“We hit it off real quick,” Trent said. “It took me a while to finally meet her, but once I did I guess it didn’t take me too long to figure out she was the one.”

Trent and Theresa are both highly-touted basketball players, but they say the shared bond extends far beyond the court.

“It’s great and it’s cool to have that connection with basketball,” Trent said.

“But it really doesn’t make who I am or who she is. More just the type of person she is, the way she lives her life, the faith she lives by. That’s what really attracted me to her. Her looks as well, I guess.”

Theresa echoed Trent, saying “basketball isn’t what our relationship is all about.”

But the demands of a college basketball schedule and full course load is just another bond the couple shares.

“During the season, I think I’m a little bit better able to understand what he’s gone through and the types of things he’s feeling or the frustrations he might have that you can experience during the season, just because a lot of times I’m going through them at the same time,” Theresa said.

The couple also gives each other advice about what they see in each other’s play on the court.

“If she sees something in my game, she’s not going to baby me,” Trent said. “She’ll tell me the truth. If I’m not doing something, she’ll tell me if I ask her to.”

Given their packed schedules and the almost 180 miles separating them, Trent and Theresa scarcely see each other during the season.

“It’s not the ideal situation being far apart and both playing basketball,” Trent said. “But you only have one chance to play basketball, and she loves playing; I love playing.”

“Being away from the person you love is never an easy thing to do,” Theresa said. “But I think if you love the person, then you’ll be willing to make it work somehow, and we do.”

The couple was able to see each other often during the summer. But with the college basketball season set to kick off soon, Trent and Theresa know their time together is something to cherish.

The couple wasn’t able to compete on the court this summer because of Trent’s ankle surgery and Theresa’s minor hip surgery. But with both now healed, they may soon return to the hardwood for a couple games of H-O-R-S-E and one-on-one to add to their running count of who wins.

Theresa said she leads in H-O-R-S-E and Trent’s up in the one-on-one series. They haven’t set a wedding date yet, but with the ring on Theresa’s finger, the competition that started on their first date may continue for a long time.