Illini challenged by Louisville, look to build off comeback victory 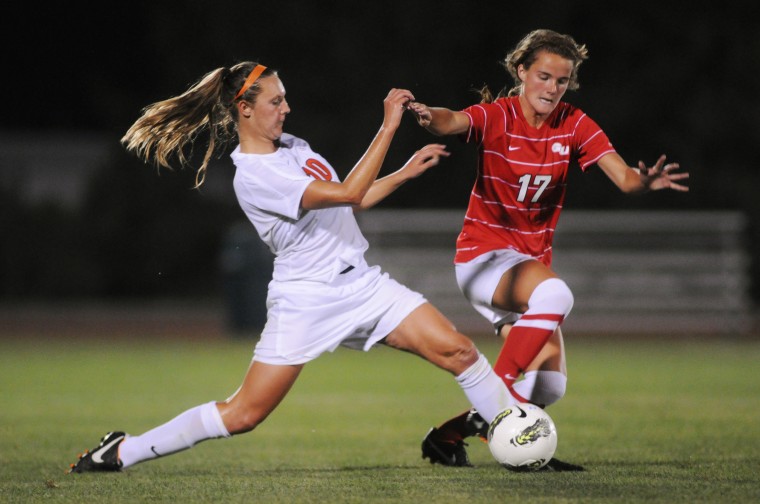 Illinois' Shayla Mutz fights for control of the ball during the soccer game against Gonzaga at the Illinois Soccer and Track Stadium on Friday, Aug 19, 2011. In their game against Louisville on Sunday, Mutz said Illinois' defense was tested and ultimately pulled through.

The Illinois soccer team “battled from behind”:https://www.dailyillini.com/index.php/article/2011/08/illinois_soccer_comes_from_behind_in_first_offensive_test_of_season Sunday to beat Louisville in extra time 2-1. With the first three games of the season being blowouts, Illinois’ new high-powered offense showed an ability to fight back and score clutch goals.

“I think that this will be good experience for the team to understand that they can play from behind a goal, being an offensive team, that is a real thing in your advantage even if you’re down a goal,” head coach Janet Rayfield said.

Illinois’ defense let in a Louisville goal early in the game, then tightened up as Louisville was held to just two shots in the second half.

“We talked at halftime that one of our greatest assets defensively is our offense, and we needed to go back out and make them defend us, and I think that happened in the second half,” Rayfield said.

The Illini have scored 17 goals in their first four games from eight different scorers.

“You know I think it’s going to be tougher to keep us off the board for 90 minutes,” Rayfield said.

The Illini have reached the midway point of their nonconference schedule without a loss. Gaining experience from “nonconference opponents”:https://www.dailyillini.com/index.php/article/2011/08/illini_explosive_offense_seek_redemption_in_2011_season is key in preparation for Big Ten play, midfielder Shayla Mutz said.

Although a team’s nonconference record has no weight in determining a team’s seed in the Big Ten Tournament, Rayfield wants her team to be challenged before conference play.

“Like today for instance is the first time we’ve been down a goal, so just being able to come back and learning the mentality that that takes,” Mutz said.

The Illini will look to continue to gain experience, as they will face their toughest nonconference opponent, USC, at home Friday.

In this week’s practice leading up to the rematch, the Illini look to improve on spots defensively where Louisville was able to challenge them.

“(Sunday’s) game really tested our defense in a lot of ways, I think we will look at a lot of video to talk about how we solve a team that counterattacks against us,” Rayfield said.

Louisville challenged the defense early in the game by playing a 4-5-1, which crowds the midfield.

If nothing else, Sunday’s comeback win may help build momentum as the team continues through nonconference play.

“It’s a great game to get your defense tested, to learn a lot about the things that you need to improve and still find a way to win,” Rayfield said.