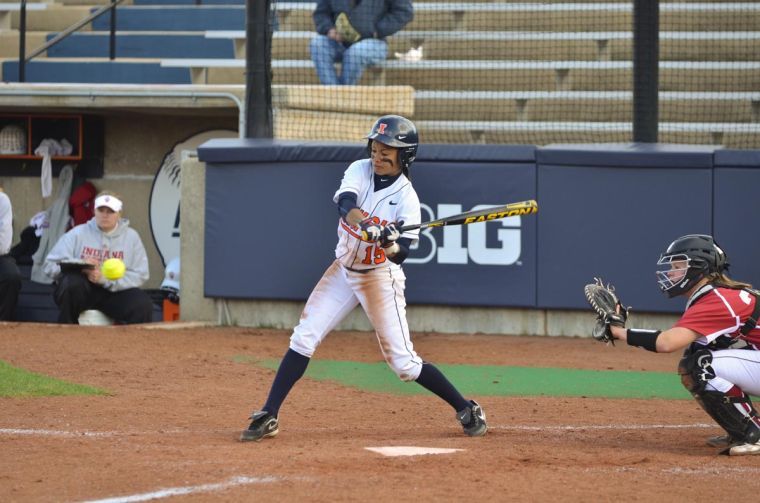 Alex Booker (15) bats during the second game of a double header against Indiana on Saturday at Eichelberger Field. The Illini won 1-0.

Alex Booker didn’t let her first at-bat against Creighton get her down.

Booker, who started the game off with a strikeout, made history soon after by recording the program’s first cycle by hitting a single, a double, a triple and a home run all in one game. She went 4-for-5 with two runs and three RBIs.

Booker, with her record performance, was named Big Ten Player of the Week. It is her first career weekly honor and the first for the Illini this season as well.

Booker not only got her job done on the field but helped motivate other players. Whether it was driving in the leading runs in the 4-2 victory over Texas-Arlington or cracking a joke from the outfield to make her pitchers, such as freshman Brandi Needham laugh and relax at the mound, Booker aided her team throughout the whole game.

“We know that we’re fighters, and we won’t go down that easily,” Booker said. “Don’t count us out. We will strike. Just knowing and believing that any part of our lineup can really get it done is, I think, the most important part of our hitting philosophy and game strategy in general.”

Following a 4-3 loss in the ninth inning to Texas Tech on Saturday, Illinois was able to return to the field on top of its game against Missouri-Kansas City.

“We just didn’t execute,” Sullivan said of the loss to Texas Tech. “We got away from our game plan a little bit and didn’t get the job done. You have to learn from those losses and we got right back to our style of play. But I was really happy to see how we responded after that game.”

With seven runs on 11 hits, Booker went 3-for-4 leading the Illini with a double, a stolen base and a run. Sophomore Allie Buach, freshman Jade Vecvanags and freshman Ruby Rivera had two hits apiece against Missouri-Kansas City. Bauch went 2-for-3 with a walk, a double and an RBI. Vecvanags doubled twice, scored, and drove in a run Rivera was 2-for-3 with a double, a home run and two runs.

In the 4-2 win against Texas-Arlington, Bauch went 3-for-4 to finsh the weekend with a .615 batting average and .923 slugging percentage. Rivera got her second home run of the season and went 2-for-4 in the victory.

It’s all in the doubles

The Illini are leading the Big Ten in fielding double plays with 11 total, which is over two times the number recorded by the second place teams , Michigan State and Iowa, who are both tied with five. They also lead the conference in doubles with 19.

In a 9-1 win against Creighton, Rivera had two doubles and Vecanags recorded her third double in two games.

“It means we’re really playing well,” head coach Terri Sullivan said. “Sometimes we are in the right place at the right time position wise. Our pitchers are really pitching pitches that show they trust their defense to make plays.”

With a mentality to close out Sundays strong which Sullivan stressed is so critical to softball, the Illini are looking to keep the momentum rolling as it turns to its next tournament.

“Knowing that winning on Sunday carries, it carries over into the next weekend,” Booker said. “As much as we’d like to say we can clear our memories, we all know that when you are coming off momentum you are coming in hot for the next weekend. Going into California with two huge wins will be quite nice. Just playing with heart and playing with passion. We’re playing for more than just us out there. We’re playing for Illini pride and Illini nation.”