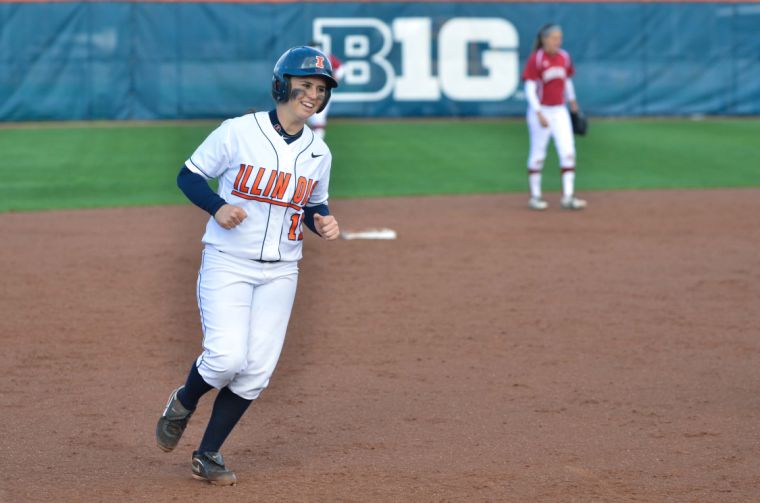 Remeny Perez (17) runs to home plate as she scores the only run during the second game of a double header against Indiana on Saturday at Eichelberger Field. The Illini won 1-0.

It’s a swap from beaches to cornfields and swimsuits to winter coats. From surfing to expertly navigating the ice that has plagued Champaign this winter, the change from Southern California to Illinois is a drastic one to say the least.

But 2,000 miles later, three members of the Illinois softball team have found their new home.

Each is originally from less than an hour from the site of the Long Beach Louisville Slugger Invitational’s first game, so when sophomore Remeny Perez, freshman Ruby Rivera and freshman Jade Vecvanags travel to Southern California this weekend for the Illinois softball team’s games in the invitational, they will return to family, friends and a sliver of their experiences out on the West Coast.

Choosing where to attend college and finding the right fit took some time and involved numerous other offers and visits for the athletes. The three were talking with schools such as Purdue, California-Davis and Michigan, but ultimately Illinois became the place that had everything they were looking for.

“Thinking about where you want to go when you’re in high school, it’s about what is going to get you to that next level,” Perez said. “Whether it’s academically, athletically or as a person. Visiting the school and in doing all my research, (Illinois) really just got an A-plus in all those categories.”

The three found a solid and energetic support system in the coaching staff, a beautiful campus and nationally renowned academics.

“All my friends had committed before me, and they all told me, ‘Oh when you get there, you’ll just know,’” Vecvanags said. “And it’s true, you just walk out of the car, and you see everything and you just know. It’s just a feeling that you get inside that this is it.”

Feeling at home from the moment they stepped on campus, the decision to come halfway across the country became much easier.

With the recruitment process being a roll of the dice for some players, assistant head coach Donna DiBiase found Perez on a very lucky accident.

From that moment, communication ensued and Perez decided on the Illini when she committed her junior year. That ability to find a potential player and then form a relationship is imperative to DiBiase and the rest of the Illini coaching staff.

Vecvanags and Rivera were found because of the trusting relationships developed between travel and college coaches.

“They’re a good group,” DiBiase said. “There’s great chemistry among them all.”

Perez and Vecvanags, who live within minutes of each other, have hung out over breaks taking Perez’s dad’s 1968 restored Ford Bronco to the beach. Rivera, who was busy over the breaks and couldn’t hang out with the two, has nonetheless helped concoct summer plans of surfing and more beach going with the group.

Whether it’s the beach or the food, these women have found a commonality in each that comes out when missing home. Especially longed for among all three are the 219 locations In-N-Out has in California.

“We’ll get out from lifting and we’ll be like, you know what sounds really good right now?” Rivera said. “‘In-N-Out’ and we’re all just like oh my god, just dying.”

While Perez has given advice on what to pack and how to deal with the change in seasons, more importantly she’s aided her younger California counterparts in becoming more acclimated with life so far from what they’re used to.