O’Toole not to be overlooked in Illini quarterback battle 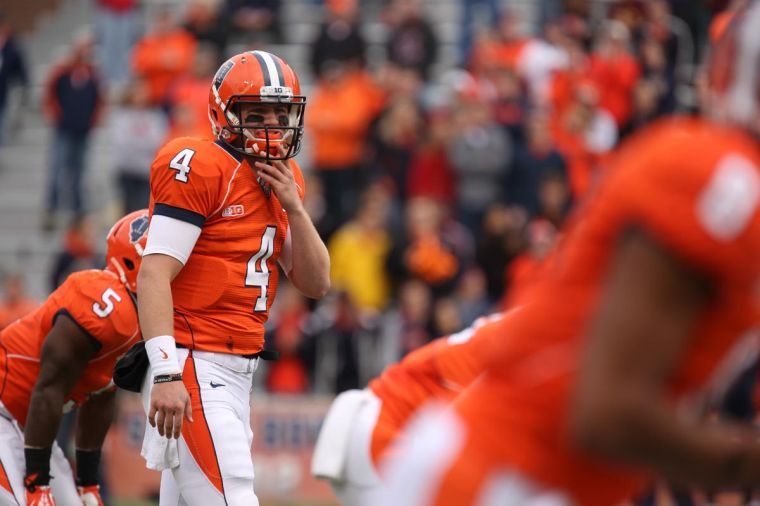 Illinois’ Reilly O’Toole looks to the bench during the game against No. 3 Ohio State at Memorial Stadium in Champaign, Ill., on Saturday, Nov. 16, 2013. The Illini lost 60-35.

Reilly O’Toole didn’t come to Illinois to be a backup quarterback his entire career. He came in the summer of 2011, after winning back-to-back state championships for Wheaton Warrenville South High School, expecting to play.

And in that first year, O’Toole did play. He made appearances in 10 of 13 Illinois football games as Nathan Scheelhaase’s backup. But it wasn’t always pretty. He has completed 59 percent of his passes, thrown one touchdown and four interceptions.

O’Toole saw the field much less his sophomore and junior seasons.

To this point in his career, O’Toole is more likely known for his gaffes than his successes. Illini fans will remember the 45-14 blowout at the hands of Arizona State, O’Toole’s numerous failed attempts to run the read option in 2012 and his fumble against Ohio State last year that went for a safety and ended Illinois’ comeback attempt.

Through it all, he has maintained a smile. As spring practice kicks off Wednesday, O’Toole believes he has a shot at winning the starting quarterback spot left vacant by Scheelhaase.

“I fully expect to start next year and that’s the mindset I have,” O’Toole said. “I’m just going to go out there, do my best and have no regrets.”

O’Toole is not the favorite for the starting spot. Wes Lunt and Aaron Bailey are the perceived front-runners. O’Toole knows what he’s up against.

“They don’t have too many weaknesses,” O’Toole said of his competitors. “Aaron’s one of the fastest guys on the team, really strong. Wes is just the prototypical quarterback: big, strong arm. “

But that doesn’t mean O’Toole can’t win the job.

For the first time in his Illinois career, O’Toole is heading into spring practice not having to learn a new offense. Coordinator Bill Cubit heads into his second season in charge of the Tim Beckman’s offense, after having improved them from 12th in the conference in total offense to fifth.

Beckman feels his staff will be “pretty close” to naming a starter by the end of the spring. He did not say a starter would necessarily be named. And, he added, every position on the depth chart was written in pencil.

Others might feel differently, but O’Toole doesn’t think he’s at any disadvantage in the quest to be Illinois’ starting quarterback in 2014. Is he overlooked with the likes of Lunt and Bailey battling him for the job?

“I don’t know,” he said. “I’m just going to try and do my best and hopefully play to the capabilities that I have. I haven’t really done that to this point.”

Now is his chance.