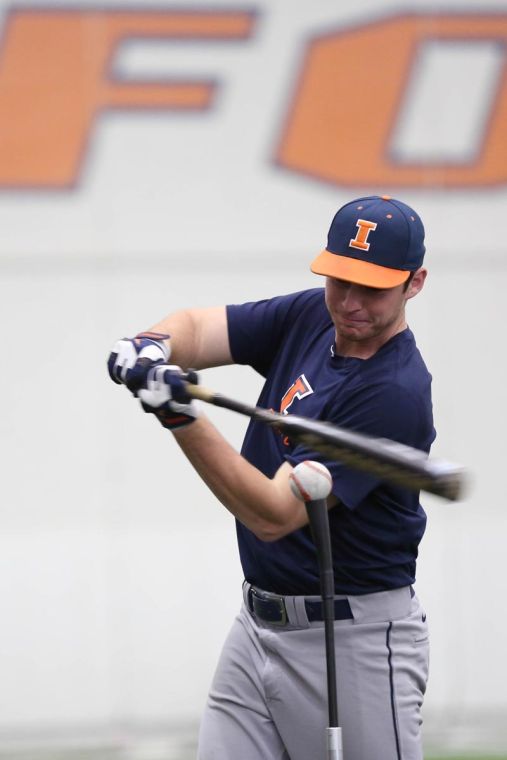 Fighting Illini baseball player Ryan Nagle warms up on the tee during practice.

At the plate, sophomore Ryan Nagle is patient. His hands are loose and close to his chest, his swing is short and swift. When he hits the ball, the bat doesn’t clank like it does for other players in batting practice — it cracks and sends the ball on a line drive before taking a hop at the edge of the infield.

But his swing hasn’t always been as effective as it is now.

“I think the big thing with Ryan is he knows his strike zone,” associate head coach Eric Snider said. “He had to make an adjustment, and I think Ryan’s done a real good job of making that adjustment of letting the ball come to him and trusting his swing.”

Leftover confidence from his first-team All-Conference days at Streator High School followed Nagle into college. He was one of the top two left-handed batters in the 2012 Illinois recruiting class and one of the top five overall.

The speed of college pitches quickly forced him to adapt his approach, though. His aggressive, go-for-it mentality wasn’t going to cut it against Division I pitchers.

“Last year, I was longer,” Nagle said. “Now my swing is just shorter, making contact and trying to hit the ball hard.”

Nagle still managed six hits in 36 at-bats last season, including two pinch-hit RBIs, which scored winning runs for Illinois against Baylor and Southern Illinois. The adjustment to his swing, however, has already tripled last year last year’s output in both hits and runs in 15 fewer appearances at the plate. And he has showed no signs of slowing down, either.

Part of his success also comes from his in-game preparation. His typical spot in middle of the batting order gives him time to learn about the opposing pitcher. He flips through depth charts in the dugout, reading up on the pitcher’s velocities, types of pitches and typical strike counts.

When he gets on deck, his process goes beyond the numbers. He doesn’t stack weights on his bat or swing at will. Each time he leaves the dugout, his eyes are glued to the pitcher, timing the pitches and swinging as if each one is coming at him.

“I love his setup in the box and his hands,” Snider said. “Last year, he didn’t always put himself in a position to hit, and that’s why he struggled a little bit.

“Now he has his hands in a really nice, quiet position, and he’s ready to go.”

Head coach Dan Hartleb has returned from road trips wanting the Illini batters to lower their number of strikeouts several times this season, but he worries about that less with Nagle.

“He’s very selective at the plate, doesn’t chase a lot of bad pitches,” Hartleb said. “And when you don’t chase bad pitches, eventually the pitcher makes a mistake, and he’s made them pay for that.”

Making pitchers pay has earned Nagle places on several of the Big Ten individual charts. In addition to his hits and batting average, he also ranks seventh for slugging percentage (.510), sixth in on-base percentage (.455), tied for 10th in RBIs (11), sixth in total bases (26) and tied for third in doubles (5) with teammate David Kerian.

These numbers are nothing more than background noise to him when so much of the season is yet to be played. From time to time, he said he might glance at them, but never enough to take disrupt him when he reaches the plate.

“I’m just waiting for a fastball,” Nagle said. “I just want something to hit.”

J.J. can be reached at [email protected]om and  @Wilsonable07.