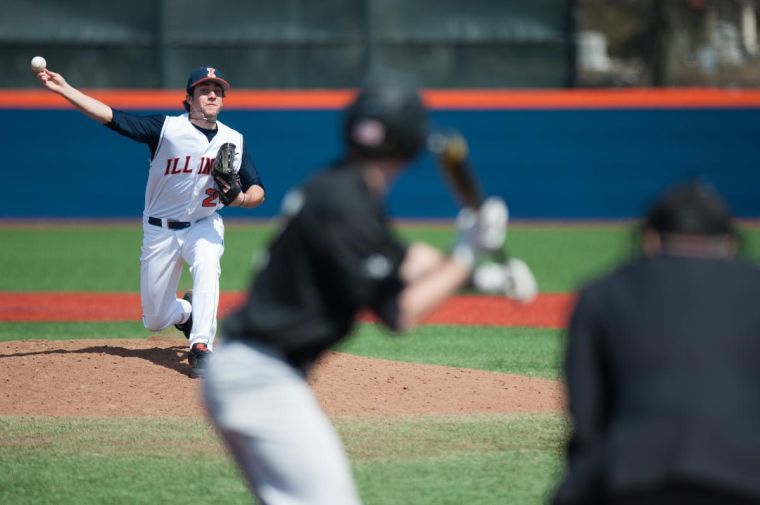 Illinois’ Ryan Castellanos (20) throws a pitch during the game against Oakland, held at Illini Field on Sunday, Mar. 31, 2013.

With two outs and the bases loaded at the top of the ninth inning against Southern Illinois, leadoff hitter Will Krug stepped to the plate and seemed poised to help the Illinois baseball team win its second series of the season.

With a 1-2 count, though, Krug swung on an inside fastball, forcing a fielder’s choice. The Salukis made the play at home to close out the Illini 3-2, handing them their fourth series loss of the season.

“We weren’t as aggressive today,” head coach Dan Hartleb said after Saturday’s doubleheader. “It’s a mentality, and right now, we have a poor mentality at the plate.”

Illinois (7-9) started the weekend hot when No. 1 starter Kevin Duchene pitched a perfect six innings Friday night before allowing Southern Illinois to score its only run of the 5-1 victory in the eighth. Duchene struck out six and allowed just four hits in his nine-inning, 93-pitch performance, earning his second win of the season.

“They were getting themselves out at a pretty decent rate, so I was pretty effective outside the zone,” Duchene said. “It was one of those days where I knew where everything was going.”

At bat, the Illini more than tripled the Salukis’ number of hits in the first game, 13 to 4.

Krug started the action with a leadoff double in the first before stealing third base. One out later, junior Reid Roper tripled and brought Krug in for an early Illini lead.

Sophomore Ryan Nagle reached first base on a walk and, thanks to aggressive baserunning on a single, was able to reach home on a sacrifice groundout to shortstop in the second, putting the Illini ahead for good. They tacked on an additional three runs to put the Salukis away.

Illinois returned Saturday for a doubleheader after forecasted inclement weather forced Sunday’s game to be rescheduled.

This time, Illinois’ bats cooled down, while the mound went ice cold. In his second start of the season, sophomore pitcher Ryan Castellanos allowed all six runs, five earned, before being pulled in the fourth.

The Illini scored five runs in eight hits, but 0-for-5 performances from Krug and junior David Kerian stunted a repeat in efficiency from the day before. Three fielding errors also proved costly as the Salukis won 6-5 to tie the series.

“I think it may have been a lack of focus or energy,” Krug said. “Maybe it might be nerves from some of the younger guys, but I think the majority is bringing the energy.”

In the second game, Illinois held the score closer but fell a few hits shy of clinching the win.

Starter Drasen Johnson improved details on the mound by limiting the Salukis to seven hits and two earned runs, but even five strikeouts couldn’t prevent him from being pinned with a loss.

The offense stayed soft with seven hits in 33 at-bats, but fielding troubles persisted as the crucial difference from the previous game.

“I think as a team, we’re struggling with bringing the same mind set and attitude to the field every single day,” Duchene said. “Going out there and absolutely wanting to destroy your opposition.

“If we can come out with more consistent energy from a team standpoint all the way around, I think this season could turn around real fast.”

J.J. can be reached at [email protected] and @Wilsonable07.