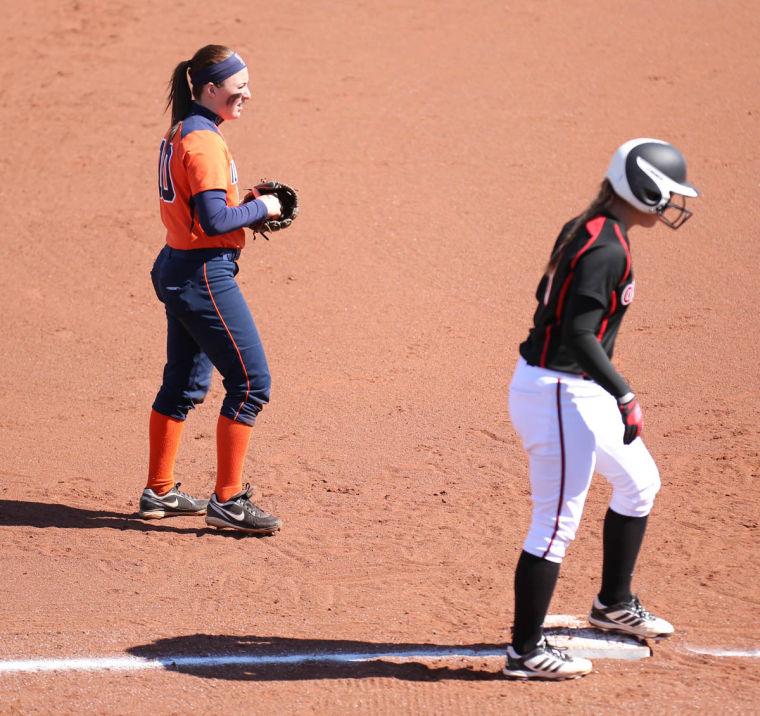 Illinois' Katie Repole (10) watches over third base during the match against Omaha at Eichelberger Field, on Saturday, Mar. 15, 2014. The Illni won 6-1.

For the Illinois softball team, Big Ten play is the difference between facing one opponent and three to five opponents per weekend. It’s an opportunity for rivalries to flourish and competition to thrive.  And now, 21 games into the season, it is finally time for the team to open Big Ten conference play.

Illinois (14-7) will have the chance to embrace its competitive conference spirit in a three game series against Iowa (5-12).

“The Big Ten is always different than any other competition,” sophomore Allie Bauch said. “It’s kind of what means the most, and this is what we work towards, so we’re really excited. All the games before are what have prepared us for this time now.”

The Illini will come home for only the second time this season, and they are looking to start off conference play with wins at home.

Illinois is coming off a strong offensive performance in the Fighting Illini Classic, its home-opening tournament, where it won two of three games. Illinois defeated Western Michigan and Omaha but lost to North Dakota State.

Though playing one team is easier on the coaches in terms of scouting, it’s about staying one step ahead of the other team for the players.

“The really big thing about when you play a team three times is that they’re going to know every strength and every weakness, and they’re going to play to it,” sophomore Remeny Perez said. “So it’s making those adjustments each inning, each pitch and each game.”

Veteran players can attest to the level of competition and how conference play is more personal because of the different attention paid to the other team. Against Iowa, Illinois is 12-18 all-time but won its last two games on April 23, 2013.

In this weekend’s matchup, the lineup hits especially close to home. Sophomore Katie Repole has a twin sister, Whitney, who plays for the Hawkeyes. During their games, the Repole family sits in the middle of the stands sporting shirts with the letter ‘I’ split half orange and half yellow.

The two played on separate travel teams growing up but still train together during the summer, turning the series into more than just a conference rivalry for the sisters.

“Even though we’ve played together, we’ve always competed against each other,” Repole said. “And everyone has always compared us, so while we are here we get to be our own people, but the competition is still the same.”

Despite playing an aggressive schedule leading up to conference play, head coach Terri Sullivan said there is nothing quite like Big Ten softball in the mental and physical competition.

“The third game of the series is always just a real dog fight because you’re pretty familiar with one other,” Sullivan said. “And I think it’s all about heart come the end of the weekend. Staying in the moment and focusing on playing our style of play and being consistent on both sides of the game is what it is all about.”