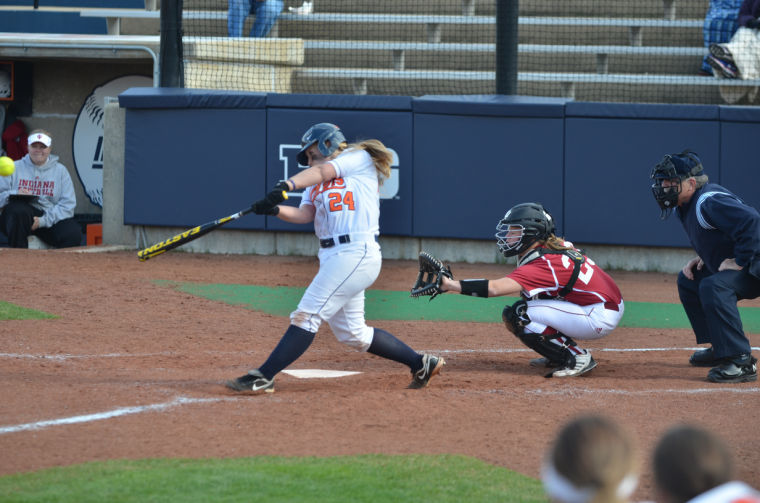 Jenna Mychko  bats during the second game of a double header against Indiana on Saturday at Eichelberger Field. The Illini won 1-0.

The Illinois softball team traveled to Normal, Ill., on Tuesday hoping to break its four-game losing streak in a match-up against Illinois State. And with an early offensive burst, the Illini did just that, beating the Redbirds 7-4.

A leadoff homer in the first by sophomore Allie Bauch set the tone for the rest of the game and helped the Illini execute in an area where the team has struggled over the past four games. Senior Jenna Mychko then singled, driving in junior Jess Perkins for a two run lead as the Illini went to the bottom of the first.

“It was nice to lead off with that because we always talk about having strong starts,” Bauch said. “But you can’t always depend on that. We learned that because Illinois State bounced right back, you have to get more runs. You can’t settle on that, but it is a good confidence booster.”

Illinois bounced back after being swept in a three game series against No. 15 Minnesota over the weekend. The team also lost its second of two games against No. 8 Missouri last week. During its losing streak, Illinois struggled to string together multiple hits, and left 23 runners on base throughout all four games.

“We had a really strong lineup, and everyone contributed,” head coach Terri Sullivan said. “We had good adjustments in our at-bats and were seeing the ball well. Everybody was just anxious to come back to the plate and contribute.”

In the fourth inning the Illinois offense continued to put past struggles aside and added three runs to its tally. Mychko led off with a solo home run and Bauch went deep again later in the inning for a two-run homer.

“We were definitely different at the plate,” Bauch said. “We were more aggressive. The past weekend when we were struggling, we were taking that first pitch, which is not our game plan. Today we were being us and just being relaxed at the plate. We were thinking too much before. You just got to go up and do you. And that’s what we did today.”

The Redbirds finally got on the scoreboard in the bottom of the fourth with a three-run homer. The Illinois defense didn’t help themselves, committing a pair of errors in the inning.

After giving up nine home runs in the three Minnesota games, the Illini also improved upon its pitching. Freshman Brandi Needham pitched all seven innings and struck out five against the Redbirds after a tough weekend against the Gophers.

Needham used practice to work on locating pitches and keeping the ball off the plate.

“Coach has been telling us to stick with the game plan and go pitch-by-pitch,” Needham said. “And I think that really helped on the mental side. After this weekend, I thought it could only get better and I just had to keep fighting forward. It gave me a new perspective and it’s just something you have to go through.”

The Illini faced the Redbirds a day earlier than scheduled due to predicted thunderstorms Wednesday. Before Tuesday’s game, Illinois State had taken the last three games in the all-time series. Illinois’ win brought the series record to 10-8 in favor of the Illini.