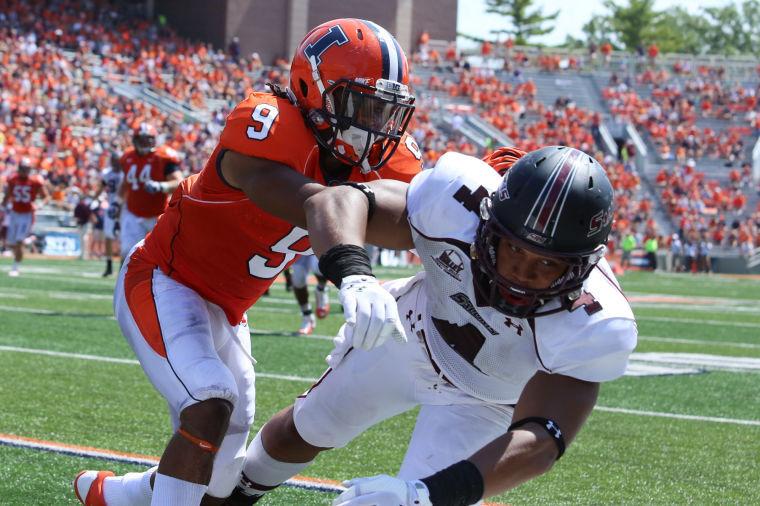 Illinois' Earnest Thomas (9) plays defense during the game against Southern Illinois at Memorial Stadium on Saturday, Aug. 31, 2013. With most starters returning, the defense looks to improve from a dreadful year.

Last season, the Illinois defense was near the bottom of the country in most major statistical categories.

The Illini ranked 104th of 123 teams nationally in scoring defense, allowing 35.4 points per game. That number jumped to 40.8 in eight Big Ten contests, where the Illini were 1-7.

The defense simply couldn’t get off the field. Illinois ranked 104th in the country in third down conversion percentage at 45.2 percent, and 119th overall with only 11 turnovers forced. Combine those numbers with a unit that allowed 238.6 rushing yards per contest, and the Illini defense was in trouble last year.

After last year’s disaster, the Illini return almost the whole defense — eight starters in all — and the entire secondary, which is looking for redemption as spring practice winds down.

The secondary featured sophomore starters at cornerback in V’Angelo Bentley and Eaton Spence to go along with freshmen reserves in Darius Mosely and Jaylen Dunlap. Safety didn’t have much more experience. Outside of then-junior Earnest Thomas III, the Illini featured Taylor Barton, a redshirt freshman, and a junior college transfer in his first season in Champaign, Zane Petty.

All those young players return a year older and a year stronger to try and bring the defense back to an acceptable level.

“Those guys have played, they got pretty good experience,” defensive coordinator Tim Banks said. “Their eyes aren’t as bright. They’re kind of taking it in, some of the details of the coverage, and I think they’re a lot more confident playing the ball when the ball is in the air.”

The Illini moved Thomas from safety to STAR this spring, a move that he says brings more versatility to the defense. Thomas was second on the team last season with 101 tackles and led the Illini with seven pass breakups and three forced fumbles.

“With me there, we’ve got a lot of nickel principles,” Thomas said. “(STAR) is always in the middle of everything. I look at myself as one of those people that has to spark the defense every single practice.”

Thomas said this spring the defense is trying to nail down the absolute basics of the system and build from the ground up.

At safety, Petty and Barton appear to be the favorites to start again, after both saw reps with the starters at free safety during last season. Barton was the opening day starter at free safety before being usurped by Petty after five games.

“(Petty) has really picked up where he’s left off,” Banks said. “He’s just been really consistent. He doesn’t make a lot of mistakes, and he’s where he needs to be. He’s accountable.”

At cornerback, the Illini return all of last year’s main pieces, although sophomore Dillan Cazley made the switch from the crowded cornerback position to safety to bolster some depth behind Petty and Barton. The Illini had a five-man rotation at corner — none older than a sophomore a year ago. Banks also highlighted Spence as a player who has emerged from the pack, along with sophomore Caleb Day.

“Day is playing with a little more confidence, a little more swagger out there,” Banks said. “He should. He got baptized last year in some big moments, and I think he’s a better player for it.”

Although Banks reiterated the unit has a long way to go, there is improvement from a calendar year ago, when many key pieces in the secondary were busy planning their prom.

“I think we’ve made some strides,” Banks said. “Obviously we’re still a work in progress, but are we better than we were last year at this point? I think we are.”