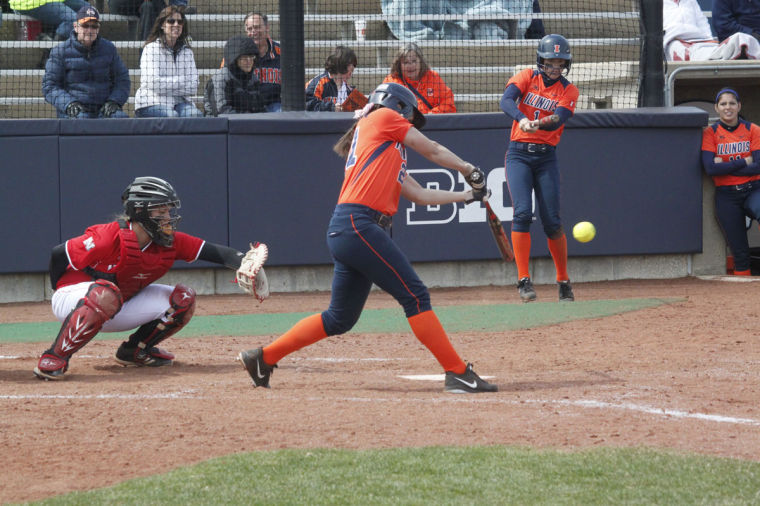 Illinois' Allie Bauch (21) hits the ball during the game at Eichelberger Field on April 6.

The Illinois softball team continued its Big Ten struggles this weekend with a three-game sweep against Wisconsin in Madison, Wis., to extend the Illini’s losing streak to five games. With two eerily similar close defeats in later innings, the Illini struggled to cleanly execute offensively and defensively.

Last weekend, the pitching staff struggled to combine smoothly with the offense in two losses to then-No. 20 Nebraska.

Against Wisconsin it was both the defense and the offense that failed to back up a strong pitching performance and get the job done.

“We were really disappointed how we came out that first game of the series,” head coach Terri Sullivan said. “We just didn’t play our style of defense. Brandi (Needham) pitched well, and we just didn’t bring our A-game from a defensive point of view, which is a stronghold of this team. The second game we were sloppy. We were pressed a bit because we didn’t offensively get in a rhythm.”

With storms in the forecast, Illinois played a doubleheader on Friday and one game on Saturday, as opposed to the originally scheduled Sunday game.

In the first game of the doubleheader, it was a walk-off RBI single that led to a 3-2 Wisconsin win. Needham held the Badgers scoreless until the top of the fifth, when Wisconsin scored two runs. Though the Illini answered back in the sixth to tie the game, they failed to then take a lead in the seventh inning.

Illinois was defeated 10-3 in the second game of Friday’s doubleheader. The Illini had eight hits and stranded nine runners. But it was Wisconsin’s senior third baseman Michelle Mueller who stole the show in the second game, going 4-for-4 with three home runs for a school-record eight RBIs.

Illinois’ offense hit just 4-for-20 with runners in scoring position Friday and left seven on base in the first game — compared with the Badgers, who stranded 15 but still came away with the win.

The defense mirrored the offense’s poor performance, making a season-worst five errors in the second game of the doubleheader. Illinois had four unearned runs over both games.

“When you’re not hitting well and you’re not defending well, you’re going to have a really hard time coming away with wins,” Sullivan said. “And that’s obviously the way it should be. You should have to earn it and make your opponent earn it. I think we made Wisconsin earn that first one. The second one we didn’t play well enough to win a game in conference at this time of the year.”

Saturday’s 3-2 defeat saw a similar scenario to Friday’s first game. The Illini were down two but came back to tie the game in the third. The scored remained 2-2 until the sixth when the Badgers scored what would be the winning run as the Illini failed to answer back in the seventh.

Second baseman Allie Bauch led the Illini at the plate, going 2-for-4 and scoring the tying run in the third inning, building off her performance from Friday where she had four hits in the doubleheader.

Though the Illini didn’t come out strong in the first innings of Sunday’s game, Sullivan was proud of how her team executed as the game went on. Now, she says, it’s time to use that for the rest of the season.

“We just need to play 5 percent better, and we are capable of that,” Sullivan said. “Across the board top to bottom, our team really can get in their offensive groove. We did come from behind to tie it up after losing the first two games. To get behind and to show that we weren’t going to stop, I thought was really big. We just have to win innings going forward.”