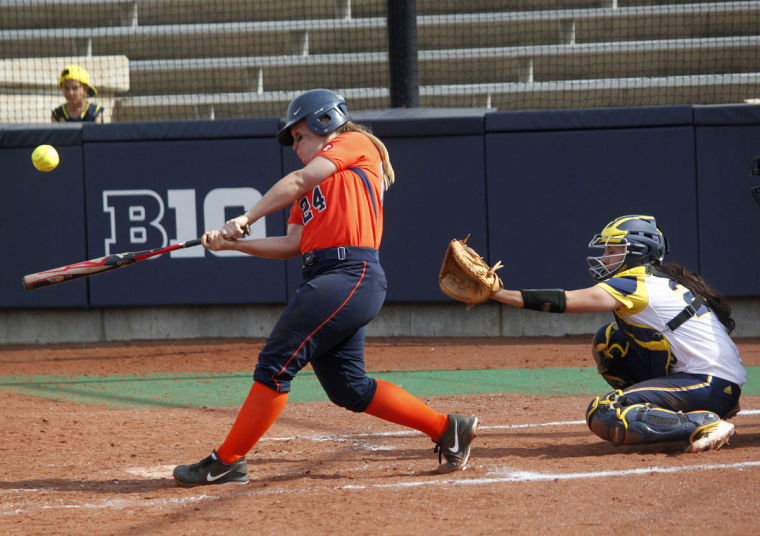 Illinois’ Jenna Mychko (24) hits the ball during the second game against Michigan on Saturday April 26. The Illini lost 6-5.

Illinois was staging a comeback. Down 6-2 at one point to No. 4 Michigan, the team had rallied back to pull within one run heading into the bottom of the seventh when Mychko came up to bat.

“I just told myself that I was getting on base no matter what,” Mychko said. “I didn’t care what it took. I was going to get on base.”

The Illini were looking for their first Big Ten series win of the season after getting an upset mercy rule victory on Friday night. Michigan returned the favor with a mercy rule win of its own in the first game of a double header on Saturday.

Mychko hit a double to left field to put the Illini in position to tie the game in the rubber match, but the comeback fell apart during the next at-bat.

On sophomore Remeny Perez’s groundout back to the pitcher, pinch runner Danielle Trezzo came too far off the bag at second. The first baseman made the throw to second for the close tag as Trezzo dove back to the bag. The umpire originally called her safe but then overturned the call, much to the dismay of Illinois head coach Terri Sullivan.

Sullivan was thrown out of the game after a lengthy argument with the umpires. In the final at-bat, junior Jess Perkins was unable to get a hit and the Illini fell by a score of 6-5 to the Wolverines. Although Sullivan was not available for comment following the game, assistant coach Katie O’Connell echoed the sentiment of the coaches and players, feeling that the call should not have been overturned.

“I thought it wasn’t fair to take the game out of the hands of the players,” O’Connell said. “They made a call, and I thought it should have stayed that way.”

Although she was upset with how the game ended, O’Connell added that the team did miss opportunities to take the lead earlier when the Illini had the bases loaded, but weren’t able to score enough runs to grab the lead.

It was an up-and-down weekend for Illinois. The Illini came out with high energy in the series opener, looking to shock the highly ranked Wolverines. Sullivan wanted her players to use more cheers from the dugout to encourage their teammates during their at-bats.

The strategy worked as the Illini had 14 hits and 10 runs to blow out Michigan 10-2 after 6 innings in the opener. It was the highest ranked opponent the Illini have defeated in school history. Junior Brittany Sanchez led the team with three RBIs and went 3-for-4 on the day.

“I think we all just came together and felt that we can do this,” Sanchez said on Friday. “It always helps when Michigan is such a huge rivalry for us. With them being ranked and at the top of the Big Ten, we had nothing to lose. So we just went for it, and it worked out for us.”

In the second game of the series on Saturday, Michigan tied the series after a strong fourth inning in which it scored six runs. Illinois pitcher Shelese Arnold struggled through 3 1/3 innings, allowing eight runs on eight hits. Freshman Jade Vecvanags relieved Arnold in the fourth, but couldn’t prevent Michigan from winning the game after six innings by a score of 10-2.

Illinois turned to game one’s winning freshman pitcher Brandi Needham for the series finale. Needham was coming off a complete game in which she only allowed five hits.

While she allowed six runs through two innings, she held Michigan scoreless the rest of the way. Her pitching helped keep the team in the game as it went down to the wire ending with the controversial finish.

The final home game of the season wasn’t the one the Illini wanted, but the toughest part for seniors Alex Booker and Mychko was that they weren’t going to get another chance to play a game at Eichelberger field.

“It’s been very emotional,” Mychko said. “I love playing for the University of Illinois. I was really happy to come out here and play here with my sisters and compete for this school.”