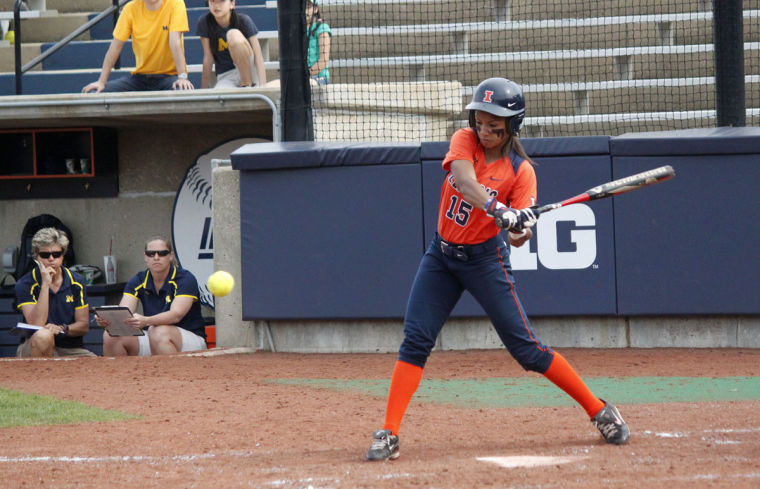 Illinois' Alex Booker attempts to hit the ball during the second game against Michigan on Saturday. The Illini lost 6-5.

Senior Alex Booker was out on the orange “I” where it broke the green of the grass in the center field of Eichelberger Field. Her mom was with her, and the pair posed for a photo before Booker headed over for post-game interviews.

As if in a daze, the usual prospect of answering questions didn’t even occur to Booker, saying she simply came out to capture a picture with her mom. Though her face was stained with the doubleheader’s remaining eye black, her eyes shone bright.

While Booker talked, senior Jenna Mychko emerged from the locker room donning the weight of ice packs on her shoulder, knees, legs and elbow. The catcher modestly apologized for the interviews about to come, saying she just wasn’t very good with them.

For both, the game and its meaning hung in the air, as tangible as the dirt beneath them.

It was Booker and Mychko who were the last two Illinois softball players left inside Eichelberger Field after Saturday’s final home game against Michigan. While the others went out to enjoy the remnants of a tailgate and then head over to a team banquet, these two stayed a little longer.

“It’s the last time playing here,” Booker said. “It’s the last time seeing this dirt. Being able to roam around on our grass with our fans is something else. It’s just different. It stinks, but it’s got to come to an end sometime.”

That end came Saturday, and with it, the knowledge that only a few more games remain before the two seniors retire the Illini uniform for good.

“It’s been very emotional,” Mychko said. “I have so much pride for this University. I was really happy to come out here and play here with my sisters and really compete for this school.”

This weekend, Illinois will play at Penn State and then go onto the Big Ten tournament in two weeks. But for head coach Terri Sullivan, Saturday’s Senior Day left her thinking back on her seniors’ softball careers.

“When we have more games, I feel like we haven’t lost them yet,” Sullivan laughed. “As coaches, we stay in our little world where we have college athletes who we work with from age 18-22, but it sure goes fast from the moment they arrive until they leave. And that’s what you wish, that you can impart upon a player when they arrive here from the gecko, just how fast it goes.”

With both wishing for the prolonged inevitable, the years have certainly sped by since the days when Booker and Mychko roomed together as freshmen. The pair have since grown much closer and demonstrated the leadership that comes with age and experience.

Mychko’s first two years were plagued by injury and surgery and spent, instead, cheering on teammates from the bench until she could play.

She weathered the initial troubles and came out as a two-time Academic-All Big Ten, an NFCA All-America Scholar Athlete and earned a Big Ten Sportsmanship Award in the 136 games she’s played.

“She’s really put things in perspective,” said her father, Eric Mychko. “She enjoys softball and loves it with all her heart. But it’s just another part of life and she sees that. It’s so different from both aspects, from sitting and watching to finally playing. Now coming to the final couple of games, you can see she doesn’t want it to end and in the same sense, she knows it has to.”

With plans this summer to help coach the travel team she played on, Mychko is pursuing a teaching certificate and looking to gain a coaching job at some point in her future.

Her Illinois career has led to an internship with the National Pro Fastpitch League Chicago Bandits this summer, and she will try out for the team at the end of May. She will then go on to be a graduate assistant coach for Texas A&M.

But the prospect of no longer playing turned her usually upbeat words to a more somber tone as she got quiet in thought after Saturday’s game.

“Not knowing if I’m going to see another day of softball,” Booker said. “Never knowing when the end is. I’m trying to potentially play later on in my career, but who knows at this point.”

That emotion was evident to Mychko and Booker, to their families before the final home weekend. Both were texting their moms, unsure how well they were prepared for the emotional weekend.

For the parents, the passion, which has equated numerous years of little league, travel ball and finally college softball, has been such an expansive part of their lives that they can’t imagine life without it. They intend to follow their daughter’s careers regardless of whether they continue play or coach.

Offseason tailgates for other Illinois sports, the weekends’ home and even cooking breakfast together has created a commonality between them all: a new family.

A family that was present from the moment Mychko and Booker committed and one that will be there in all those future alumni reunions.

On Saturday, Mychko and Booker got a taste of those reunions when Illinois recognized the 10th anniversary of the decorated 2004 team, which went furthest than any team in the softball program’s history, placing second in the Big Ten and finishing runner-up in the Big Ten tournament before being eliminated in the Regional Finals of the NCAA Tournament.

The first graduating class from the softball program, the 2004 team was composed of 15 seniors who helped found what Illinois softball means today.

“Illinois really is a family,” said Janna Sartini, the 2003 NFCA All-Region and 2002 All-Big Ten catcher who holds the Illinois career record for runners caught stealing. “And each year when new kids are added to the team, we try to show them just how close we are. Hopefully they can look at us and just see, ‘Wow it’s 10 years later and they’re still jumping into each other’s arms and crying when they see each other,’ because we just have such a close family bond that is unlike anything else.”

That bond is what left Mychko and Booker as the last in the locker room trying to soak up the remaining time they had left on Eichelberger Field.

It is what drove them to each other for a hug after the pregame senior ceremony and what will continue to drive them back for years to come. The bond these players have isn’t broken when these players leave the locker room for the final time.

Rather, it only gets stronger with each opportunity to return to Eichelberger. Only next time for Mychko and Booker, they will be posing for photos as alumni.