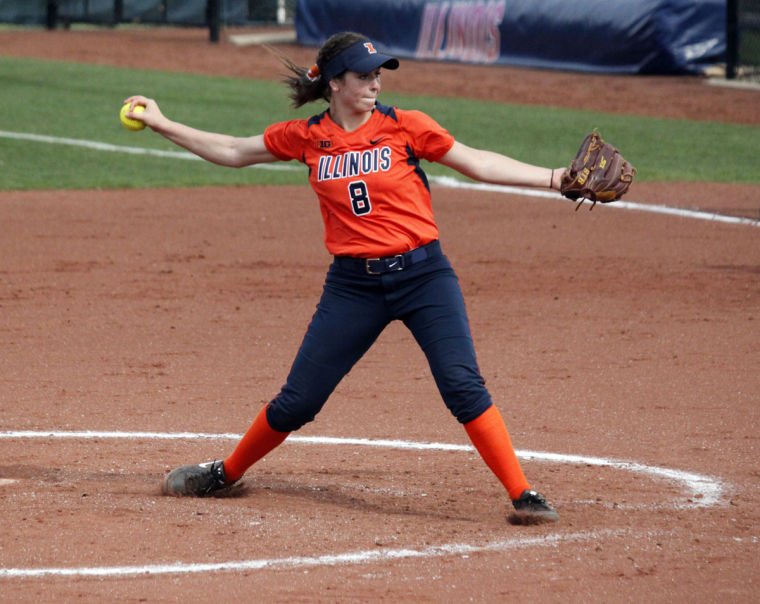 Illinois’ Brandi Needham (8) throws a pitch during the second game against Michigan at Eichelberger Field on Saturday April 26. The Illini lost 6-5.

Illinois softball head coach Terri Sullivan’s two-game suspension for arguing with umpires against Michigan on April 26 was the first suspension of any kind for Sullivan in 15 years.

Sullivan wasn’t overly concerned about how the team would do without her over the weekend because she had full faith in her staff and players. Associate head coach Donna DiBiase and assistant coach Katie O’Connell filled in during Illinois’ two wins over Penn State.

“It was definitely weird not having her there,” O’Connell said. “She is the leader of this team, but she would say that the players are the ones that win games. Players stepped up and did what they had to do.”

Sullivan returned for the team’s last game of the regular season on Sunday as the Illini finished off their sweep of the Nittany Lions.

The Illini had strong performances from pitchers Brandi Needham and Shelese Arnold over the weekend.

The two pitchers have struggled in the past against Big Ten competition, but both were able to record complete games in their starts over the weekend. They prevented the Nittany Lions from holding a lead in any of the games, which included a shutout by Needham in the series opener.

Needham said her goal over the weekend was to make sure her pitches ended up being ground balls for the defense to get easy outs. The strategy was successful. The Illini tied the school record for double plays with three in Friday’s game.

Sullivan believes her pitching staff has matured as leaders over the season, and they are peaking at the right time.

“They didn’t allow too many big hits on the weekend,” Sullivan said. “Taking control of the count is so big. When you are ahead in the pitch count, you can do so much more. I really like the leadership they had in the circle, and they are getting better and better.”

The Illini had their best weekend of the season against a conference opponent, sweeping the Nittany Lions in the last series of the season. Prior to beating Penn State, Illinois had not won a series against a Big Ten opponent all season.

Sullivan wanted to see her team play with a more aggressive style on a consistent basis. She was pleased with what she saw from her team over the weekend, both at the plate and in the circle.

Needham was a big part of that success, and she hopes to continue her stellar pitching in the Big Ten Tournament.