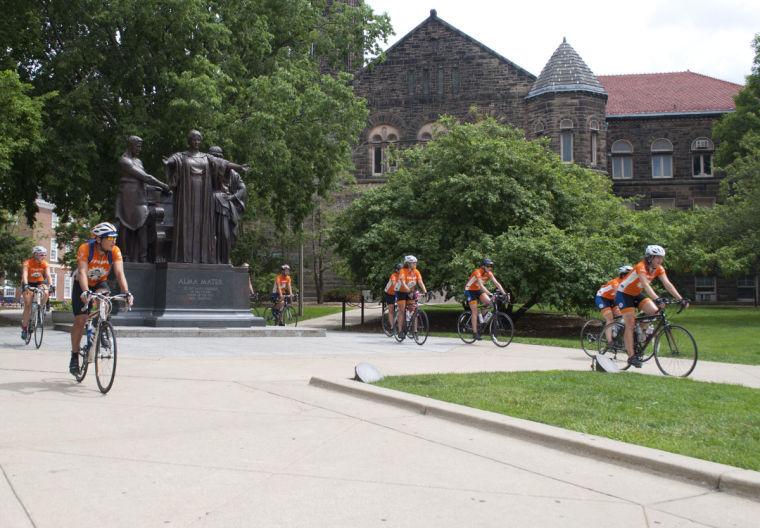 Members of the 2014 Illini 4000 team gather around the Alma Mater during their stop in Champaign on Sunday.

Whether it is for the adventure, to meet people or to fight back against the disease, the members of Illini 4000 continue the bike ride to “fight cancer on two wheels,” according to the Illini 4000 website.

The riders for the non-profit organization began the 72-day trek on May 24 in New York City, and will end on August 3 in San Francisco to raise money and awareness for cancer research. The organization consists of 20 riders and nine members of the board of directors, two of which are on this summer’s trip.

Tory Cross, president of Illini 4000 and senior in neuroscience, said the trip has been going well for the riders so far.

“It’s going great,” Cross said. “Everyone’s doing well. There have been no major injuries so far and everyone’s happy.”

So far the team has biked through New York, New Jersey, Pennsylvania, West Virginia, Ohio, Indiana and stopped in Champaign on June 8. The team will continue to ride through Illinois until June 15, and then begin the ride through Iowa.

Isalia Ramirez, current rider for the Illini 4000 team and senior in ACES, said she agreed with Cross.

“Physically, it feels like you just pedal and just keep moving,” Ramirez said. “But emotionally the more I keeping going, the more I realize how important it is.”

“It feels like a tease being in Champaign,” Ramirez said. “It feels like we haven’t even started the trip yet. We’re only one-fifth of the way done.”

Cross said the team will, on average, bike anywhere between 40 to 70 miles a day, and broke 104 miles riding through Indiana on June 5. Riders stop every 20 miles to grab some food and water.

“We jump right into it,” Cross said.

Cross also said that riders stay at churches, schools and campgrounds at the end of the day to sleep before continuing on the trip the next morning.

“We stay anywhere that will let us sleep on their floor for free,” Cross said.

Not only do Illini 4000 members ride across America, but they also participate in the Portraits Project. According to the organization’s website, the Portraits Project is a “collection of narratives that demonstrate how Americans respond to cancer based on their unique life experiences and individual beliefs. The Illini 4000 believes that everyone has a story to tell.”

“Through the Portraits Project we can help connect people that have any type of cancer, but have some connection to each other with the stories they tell about the fight,” Cross said. “Meeting people through the Portraits Project was life changing in a lot of ways. I learned things like always appreciate your loved ones and show them, because you never know what will happen.”

“People go beyond that, and that’s amazing,” said Ben Wooley, director of information for the organization and senior in Engineering. “Most years we get around $100,000 in fundraising.”

Wooley also said that Illini 4000 has raised around $720,000 since they started in 2007 for cancer research and support services.

Cross said although the trip is physically challenging, it is a lot more mental.

“You have to mentally say to yourself, ‘I hurt everywhere and every inch of my body is in pain, but I have to keep moving. I am doing this for something bigger than I am,’” Cross said. “It can be hard. But once you do it, it’s just the best feeling in the world.”

Wooley also said his experience on the trip was great, and learned a lot from the people he talked to.

“There are a lot of great people in the United States, and sometimes people focus too much on the bad things that are on the news,” Wooley said. “But when you actually stop and talk to people, they do amazing things out of the kindness of their hearts.”

Wooley agreed with Cross and said the difficult part of the trip was staying in the right mind set.

“You have to keep your head in the game and remember why you’re doing it,” Wooley said. “There are a lot of days where there is a whole lot of nothing, like large fields or going through the desert in Nevada. The thing that keeps you going is keeping in mind why you are doing this. We are making an impact.”

Although the bike rides can be physically and mentally exhausting, Cross said there are many reasons as to why students continue to participate in Illini 4000.

“You don’t have to already be a cyclist or an athlete,” Cross said. “A lot of people join for the adventure of being on your bike all day from flat Illinois to deserts and mountains out west. Some also just love to meet and talk to new people. Everyone has a story of how cancer has affected them. It’s their way of fighting back.”