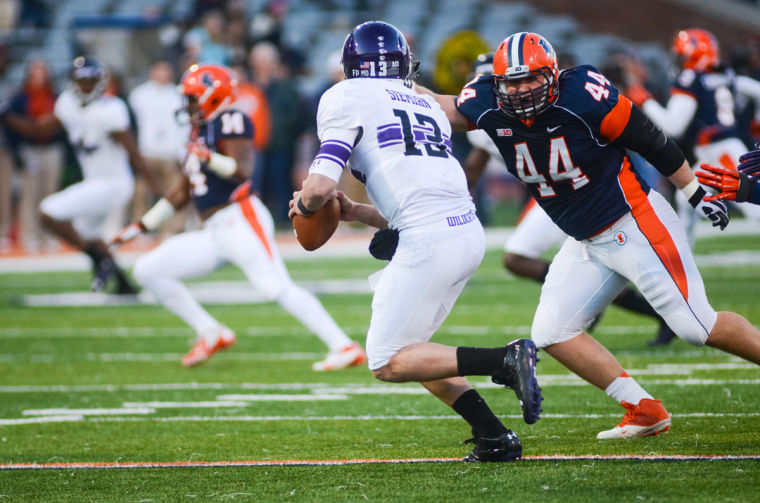 Illinois' Austin Teitsma tackles Northwestern's Trevor Siemian at Memorial Stadium on Nov. 30. Teitsma is looking to be the vocal leader for this year's Illini squad, and not just on the defensive end.

Senior Austin Teitsma’s laughter carries over to the other tables during the second day of Big Ten Media Days. It’s not sharp or forced. Rather, its inviting, a far cry from his presence on the field. It provides a personality to the numbers and one that’s almost contradictory.

Sitting at his table, it’s easy to forget that Teitsma is a solid 6-foot-2, 290-pound defensive lineman. He isn’t bored by the proceedings, instead a genuine smile spreads across his face as he describes his excitement about the upcoming season and representing Illinois football.

“It’s turning on a switch and it’s part of the game,” Teitsma said of his dual persona. “You have to be aggressive, and it’s acceptable to be like that out there on the field. I’m definitely a two-mode dude.”

It’s hard to imagine such an upbeat presence representing a defense that ranked 110th in the nation. Yet, Teitsma is exactly that — the nice guy off the field who has become the leader for the team when on the field.

It hasn’t been easy. Whereas the offense performed last year, the defense fizzled, allowing an average of 35.4 points per game and 5,778 total yards to opposing teams, both of which were more than the Illinois offense generated.

This underperformance left the team mulling over last season and instilling a hunger for improvement this year, according to Teistma.

For him, his senior season is about stepping up to bring the defense to the field. It’s about forcing turnovers, which head coach Tim Beckman said will be a critical factor in the defense’s performance. And it’s about shaping his dynamite personality into a leadership role.

“The biggest challenge for me is definitely just being vocal,” Teitsma said. “I’m a guy who leads a lot by example. But I think that through the summer with what the coaches have been doing with me, I’ve been a lot stronger in that attribute. Just pushing me to get out of my comfort zone and calling out guys if they need to step it up a bit.”

His team has noticed.

In past years, offensive players, such as graduate Corey Lewis, took the helm in boosting confidence. This year it is Teitsma’s turn.

“Just look at his body,” Beckman said. “He’s totally changed. He was brought here first and was more of a role type player. And now he has become a leader and one of the guys the defense will be known as.”

While ranked sixth on the team with 53 tackles last year, it is his athleticism and optimism that have impressed his coaches and fellow teammates.

“He is very important to this team, not just the defense, the team,” Beckman said. “He does a great job of leading. He’s a happy guy, you love being around him, you just do. He is always positive. Sometimes in a negative society he does unbelievable with that, staying positive.”

Teitsma hardly believes it’s his senior year as he still feels like a freshman, even though it’s been more than six years since he first came to an Illinois football camp as a sophomore in high school. He said he’s loved it ever since.

Now, he is providing support to younger team members, all while bolstering his unit’s morale.

The team has a little brother program, where older team members receive an incoming player and watch over them.

“He got mad at me when I called him his real name,” Teitsma laughed.

It’s his ability to be a mentor and an athlete that are contributing to his rise as a team leader. As a senior, he wants to win and prove Illinois has a Big Ten worthy defense. To prove to himself that it was a successful four years. But most importantly, as he stressed, to leave the next generation of Illinois football players with something to build on.

And while his personality captures the attention of his fellow teammates, it’s what he does in practice and games that is able to hold it.

“Austin is a phenomenal player,” said senior offensive lineman Simon Cvijanovic. “When he’s pissed off, I feel like he could flip a car over. He’s strong as hell. I’ve seen parts of Austin that not a lot of people have. He’s a great leader because he is really strong in the weight room and he plays really strong, so guys respect him. They want to learn from him, they want to be like him. They respect his leadership.”

Charlotte can be reached at [email protected] and @charlottecrrll.
Leave a Comment
MOST READ
1