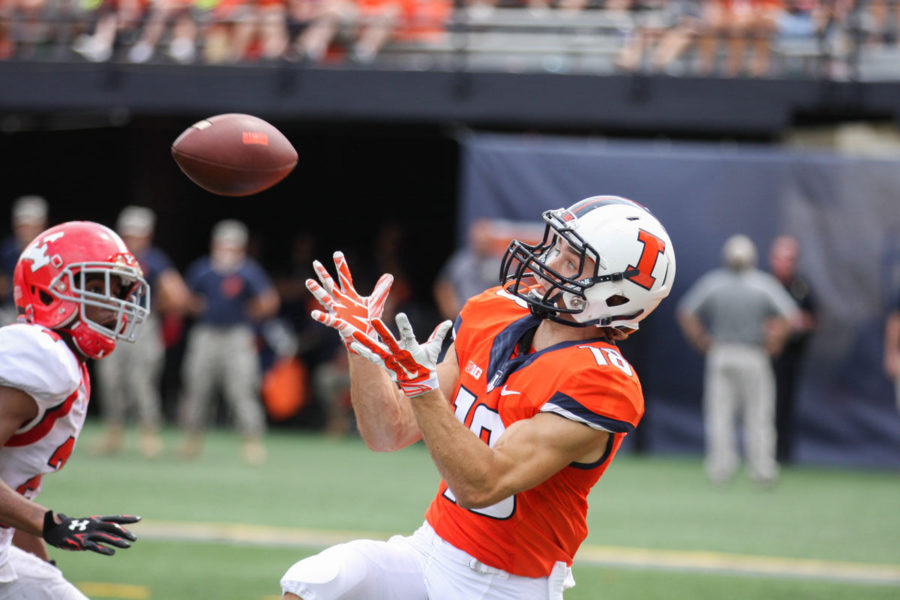 Danny Dudek assured Illini fans in the stands that all his little brother Mike needed to calm freshman jitters on Saturday was a simple 5-yard catch.

Instead, the younger Dudek raised the stakes; scoring a touchdown on an 8-yard pass from quarterback Wes Lunt, his first career reception as an Illini.

And the elder Dudek went wild, jumping out of his seat and narrowly avoiding hitting the man in the row in front of him.

“I felt more nervous watching him play (Saturday) than I’ve ever felt myself being in a game,” Danny said with a laugh. “I was so nervous that when my brother scored, I was shaking. Man, I swear that game took 10 years off my life.”

For the two brothers, football has been a common ground since they found a love of the game sparked by their grandfather, Leonard Milazzo. It was Grandpa Milazzo who dressed them in pads and helped coach their first practice.

The two continued to play together for the Naperville, Ill., Patriots youth football program and ended up at the same high school: Neuqua Valley.

Now 20, a year older than his brother, Danny was playing varsity football during his junior year when Mike got called up for the teams’ first playoff game against current Illini quarterback, Aaron Bailey’s Bolingbrook Raiders. Though the Wildcats lost to the soon-to-be Class 8A state champs, Mike performed well, leading

the team in receptions.

“From that point on, we knew he was something special,” Nequa Valley coach Bill Ellinghaus said. “He’s truly just an extremely gifted athlete. As far as being fast, he glides through the air. But all that stuff, that’s really secondary to the fact that the kid works his butt off in everything he does. That’s when I knew he was going to play Division I football, because the kid never stops working.”

And the pair of brothers seemed ready to conquer Danny’s senior season and Mike’s first as a varsity starter. However, a torn ACL sidelined Danny for the year and the brothers didn’t get the chance to compete together again.

Instead Danny supported from the sidelines through his recovery process, never missing games or team functions unless rehab got in the way. While Mike shined on the field, Danny provided the continued support for his brother and teammates. Danny, who was slated to be the team’s starting running back, ended his career at Nequa Valley with the school’s record for yards per carry (7.2).

“I’m sure at home it was hard, but as far as on the field, Mikey is such a driven athlete, an athlete that doesn’t get phased by anything,” Ellinghaus said. “He just played right though it and focused on getting better each and every practice.”

Those Friday nights under the lights, though brief, meant so much to the pair, who only one year apart, share the same birthday: August 21st. It was a chance for the two to play together, sometimes even in a formation with both in the backfield, darting to opposite sides in almost the same position.

It’s a bond and a support system that has continued even as the brothers went their separate ways. Danny went off to Dayton, where he redshirted his 2013 freshman year and then decided he no longer wanted to continue playing football. Mike headed to Illinois, where he enrolled in January in order to participate in spring practices.

As time has gone on, Mike has adjusted to college life. And the family has been along for the ride. His parents, Rick and Lynn have visited in addition to Danny coming down multiple times.

But it was his mom who had more difficulties with homesickness than Mike or Danny.

“I was a mess and I told Mikey after he graduates, he owes me another six months at home,” Lynn Dudek said with a laugh. “Danny had left for Dayton in August and then Mikey that January. To be honest, the anticipation was worse than the reality.”

As Mike has adapted, the family has begun to look at Champaign as home too. They even have found a new favorite shop in The Cookie Jar, where Rick has the owner’s number and calls in advance to request a few dozen cookies when the family comes down.

The changes for the family have happened infrequently, with some seperation between visits, but wide receiver coach Mike Bellamy has seen changes in Mike every day.

Hearing Mike’s name, Bellamy thinks of his little son, also nicknamed Mikey, but Dudek is anything but childlike when the team hits the field.

“He’s a little boy, but when he goes out on that field, he carries the weight of a grown man.” Bellamy said. “That’s something that’s just responsibility and comes with the game. He’s accepted the role and grasped everything that’s gone along with it.”

Danny admits the pressures of a Big Ten program would drive him crazy. But he said they are pressures that Mike has thrived on.

“There’s a lot of people that count on you,” Danny said. “He’s 19 years old so that’s a lot for a young teenager to deal with. But so far I think he’s dealt with it greatly, he’s been very humble and hopefully he’ll keep doing it out on the field.”

So for Mike, that first touchdown, was a moment to celebrate and a chance to thank his grandfather who died a year ago from mesothelioma. It was an opportunity to play in front of 40 members of his family and friends and demonstrate how he’s grown as a college athlete.

“When he scored his first touchdown, I’d say half us were crying and hugging and going crazy,” Lynn said. “We are Sicilian … We all saw him point to the sky and we knew he was pointing at his grandpa. It was a moment none us will ever forget.”