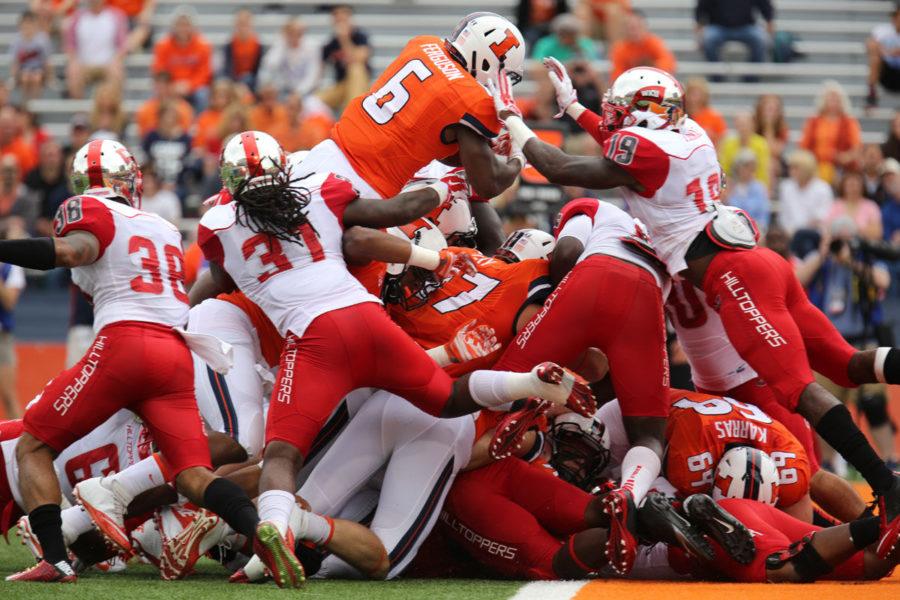 Running back Josh Ferguson puts Illinois on the board first with a touchdown in the first quarter against Western Kentucky at Memorial Stadium on Saturday. The Illini won 42-34.

Illinois football got the fast start it was looking for in Saturday’s 42-34 win over Western Kentucky, putting the ball in the end zone within the first five minutes. But like last week, the Illini really performed in the fourth quarter, scoring half of its 42 points in the final 15 minutes of play.

Running back Josh Ferguson capped Illinois’ four-play, 32-yard drive with a 1-yard touchdown after Western Kentucky dropped the snap on a punt, giving Illinois premium field position. Although Illinois put the first points on the board, Western Kentucky took the lead twice before Illinois went ahead for good.

“I told them in the locker room, ‘Please don’t do that anymore, I’m getting old and my heart is getting bad,’?” Illinois head coach Tim Beckman said. “The kids fought and I’m proud of the way they fought. I don’t think they ever questioned the opportunity to win this football game.

One of the big concerns going into the game was containing the Western Kentucky offense, which amassed 708 total yards in its first game against Bowling Green. Against the Illini, the Hilltoppers’ offense managed only to pick up 400.

Quarterback Brandon Doughty was 24-for-48 and 297 yards with two touchdowns.

“We knew they were going to move fast-paced,” Beckman said. “We knew that they were very skilled at the wide receiver position and their quarterback is a good football player. We felt we needed to pressure them and we did that with our front four.”

His interception, which resulted in a Western Kentucky field goal, came one possession after Hilltoppers cornerback Wonderful Terry ran a fumble back 95 yards for a touchdown to give Western Kentucky a 24-21 third quarter lead.

Holding the Hilltoppers to a field goal following the interception was a victory for the Illini defense.

“We tried to run the ball in on two plays, didn’t get much and then we tried to throw the ball in and had a miscommunication,” Western Kentucy head coach Jeff Brohm said. “If we could’ve scored then, I think it would’ve been a different ball game. But we didn’t, and those are the things you learn from.”

But despite the two miscues, Lunt came back and threw a 62-yard strike to Justin Hardee for a touchdown.

Hardee had a career-best 110 yards on six receptions and the one touchdown. Geronimo Allison also caught eight passes for 97 yards.

Ferguson finished with 32 yards on 14 carries. Running mate Donovonn Young also carried the ball 14 times for 47 yards and a touchdown.

The Illini also capitalized on the Hilltoppers’ three turnovers, including two fumbles and an interception. Safety Taylor Barton returned an interception for a 77-yard touchdown in the fourth quarter.

“I think we may have gotten in their head a little bit,” linebacker Mason Monheim said. “We were swarming. At the end of the day, it’s about making plays when the opportunity arises and I think we did that a lot.”