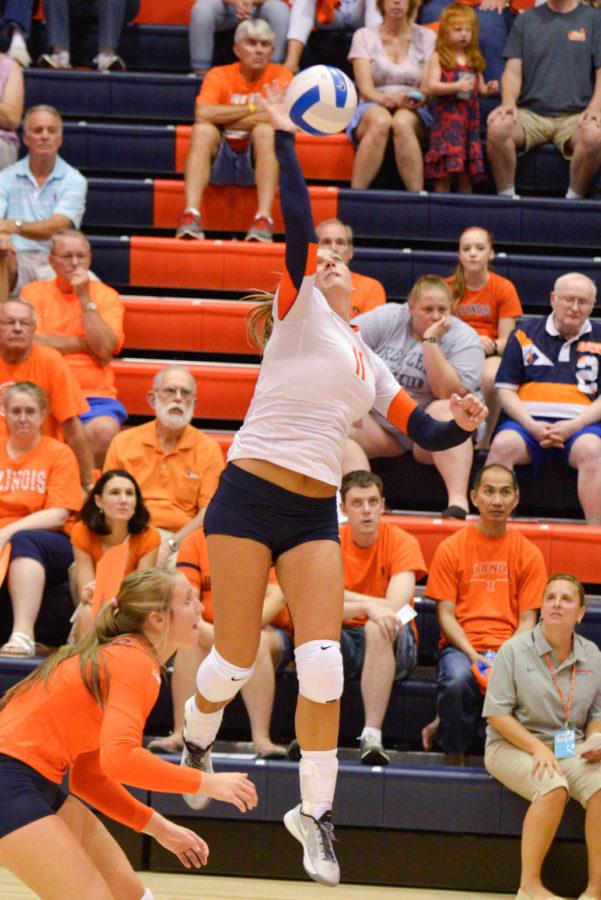 Illinois’ outside hitter Katie Roustio (11) attacks the ball during the Alumni Match on Saturday, Aug. 23. The orange and blue teams tied 2-2.

For the first time this season, the Illinois volleyball team was faced with adversity Friday night.

The Illini, who until this weekend hadn’t dropped a set, were swept by UCLA and dismantled by the Bruins outside hitter Karsta Lowe.

“(In) the match against UCLA, we really struggled to compete and play with the energy that we needed to play with,” head coach Kevin Hambly said.

Even though Illinois ultimately lost its next match, a five-set contest against then-No. 2 Stanford, it was the way the team responded after being outplayed in the first match of the weekend that gave sophomore setter Allison Palmer a more positive outlook on Illinois’ play.

“We can learn a lot from that match,” Palmer said. “I think that we know that if we execute the game plan we will win, and right now it’s just about executing.”

Although Illinois lost to Stanford, the team received key contributions from players who didn’t play to their potential against UCLA.

“I think overall we learned a lot and played pretty well (on Sunday),” Birks said. “I thought our defense and our passing was a lot better (on Sunday).”

After proving that a loss won’t weigh on the team emotionally, the Illini should now focus on closing out each match to have success moving forward.

“We have to just go and take the win,” Palmer said. “I think that’s what we took away from this one. When we’re staying together and staying connected and playing our ball, we can compete with everyone and it’s just about that execution toward the end of the sets and toward the end of the match.”

All it took was three sets.

Three sets for UCLA’s senior outside hitter Karsta Lowe to break her career high in kills with 29 against Illinois.

“She was just playing out of her mind,” Birks said. “She was hitting every single shot on the court.”

“Karsta Lowe was unstoppable,” Hambly said. “We couldn’t do much with her.

“She was physically really high and she hit really hard and she’s really good.”

Although the Illini dropped both matches on the weekend, the play of newer contributors was a bright spot for Illinois.

Freshman libero Brandi Donnelly led the team in digs in both matches, recording 18 and 26 digs against UCLA and Stanford, respectively. The Illini only had three other players record double digit digs in either game on the weekend.

Sophomore outside hitter Katie Roustio gave the Illini life on Friday, as she was moved into the rotation after a senior outside hitter Morganne Criswell started slow against the Bruins. Roustio recorded six kills on 12 attempts and finished with a .417 hitting percentage in the match.

“Morganne struggled a little bit against UCLA, so we tried (Roustio) and she did a great job,” Hambly said.

Nicholas can be reached at [email protected] and @IlliniSportsGuy.