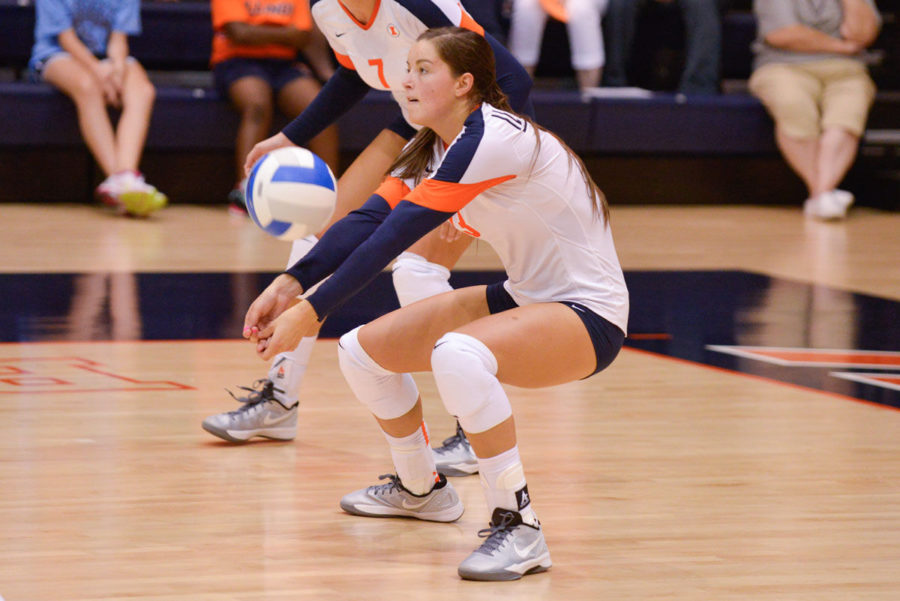 While the Illinois volleyball team returned six of seven starters from last year’s squad, this year’s team looks very different on the court.

For the first time under head coach Kevin Hambly, the Illini (3-2 on the year) have switched from a 5-1 offense to a 6-2 attack. The notation “5-1” indicates there are five available attackers on any given play, with one setter used for all six rotations, while “6-2” provides six available attackers with two different setters. Despite the name “6-2,” there is still only one setter on the court at a time.

With transfer Allison Palmer joining the squad, Hambly felt as though he had to get both Palmer and incumbent setter Alexis Viliunas in the rotation. For the Illini, Viliunas takes three rotations at setter in the back row before being replaced by Palmer for three rotations.

“I’ve never been diametrically opposed to (running a 6-2). We just didn’t have the people for it,” Hambly said after a victory over North Carolina. “We have them now.”

The 6-2 puts a setter in the back row at all times, while the other “setter” position in the front row is replaced with an opposite side hitter, typically providing the team with better attacking and blocking near the net. Illinois wanted to maximize its attacking capabilities with an opposite hitter always in the game, either Ali Stark or Liz McMahon.

In last year’s 5-1 system, Viliunas played all six rotations and was the only setter Illinois used. In a 5-1, when the setter is in the front row, it allows the setter to attack and “dump” the ball over the net instead of setting up a teammate. This would be illegal in the 6-2 because a back row player can’t attack in front of the 10-foot line. Viliunas was very adept at this last season, hitting .317 on such plays, while Palmer hit .342 in 2012 with Arizona State.

Some coaches prefer the 5-1 system because one setter consistently acts as the “quarterback” of the offense, rather than splitting time between two setters.

Another main change has been the play of Stark. Last year, she was relegated to the back row rotations for fellow right-side hitter Liz McMahon. With the setters always being in the back row, Stark has found a home at the net this season. The junior already has more kills than last season and has improved her hitting percentage from .044 last year to .219 this season.

With Stark and McMahon on the block against opposing outside hitters, it creates a stiff block for teams to combat. With the Big Ten being a grind-it-out, defensive league, having a top-notch block was another reason Hambly made the switch.

“People talk about what the 6-2 does offensively, but I love what it does for us defensively,” Hambly said prior to the season.

So far, it’s paid dividends. The team’s hitting percentage, assists per set and blocks per set are all up from last year’s numbers.