Off the field improvements make the difference for Barton 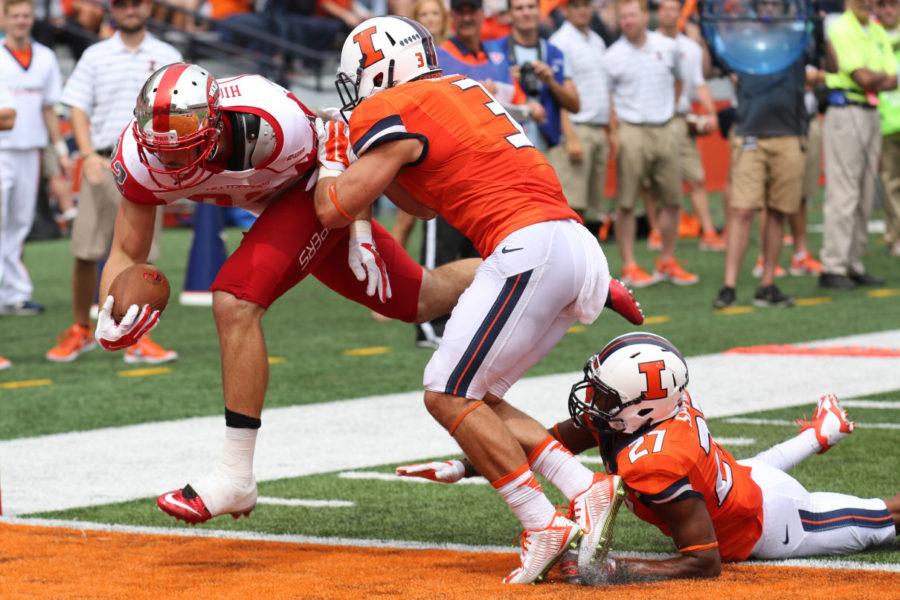 Illinois’ Taylor Barton (3) attempts to stop a Western Kentucky touchdown during the game at Memorial Stadium on Saturday. Barton later intercepted a pass and returned it for a touchdown.

On Saturday, the read was perfect.

Free safety Taylor Barton made an interception grab that would lead to a touchdown to give the Illini a two-possession lead.

It was a play they had worked on before. But that play did not always go according to plan in practice.

Barton admitted to messing up his read on that play before. This time though, after numerous runs, the play was executed perfectly on game day.

“It was man-coverage and my guy went away,” Barton said of his fourth quarter interception. “So I become the free guy, and at that point, I just read the quarterback and he took me right to it. After that I saw green grass and just kept running.”

Barton would keep running for 77 yards and a touchdown.

While the execution of that play looked effortless on the field, the labor behind it has been two and a half years in the making.

Barton, a redshirt sophomore, played in 11 games during his first season, recording 34 tackles. In just two games this year, Barton already has 21 tackles.

“Last year was my first time playing in the college level, so everything was moving faster,” Barton said. “I think the second year coming around, things slow down for you and you can kind of analyze things better, it’s a slower game now.”

The game may have slowed down for Barton, but according to his coaches it’s a combination of factors that have contributed to his success.

One of the biggest factors is his study of game film.

“As a group, our secondary studies extremely hard,” defensive coordinator Tim Banks said. “Those guys are in there, going from formations to any situational part of the game. Those guys are now playing at a higher level because of their preparation.”

Barton has made it a priority to watch game film, learning how to study it properly.

“Now I’m not just watching film, looking at it,” Barton said. “Now I know how to actually analyze it and study it, breaking it up into formation, situation first down, third down, stuff like that. He (Banks) has taught us that well. I think now that we’re watching in that way, we’re actually learning stuff instead of just watching film to watch film.”

In combination with the mental aspects, Barton has been actively working on his body.

According to 247 Sports, Barton weighed 180 pounds coming out of high school. He’s since bulked up and now weighs in at 215 pounds.

The work has paid off for Barton and the coaches alike.

“I’ll tell you, I can’t be more impressed, probably the biggest stride on our football team has been Taylor,” head coach Tim Beckman said. “His speed, he’s worked tremendously hard on trying to become a full player and he studies the game extremely hard. You see him in our office all the time studying the game. But he’s been able now to take his body, create himself to be a faster football player and he’s become more physical. His body has gotten stronger and those types of things. It’s good to know he’s only a sophomore, a redshirt sophomore, you really have three football seasons left with him.”