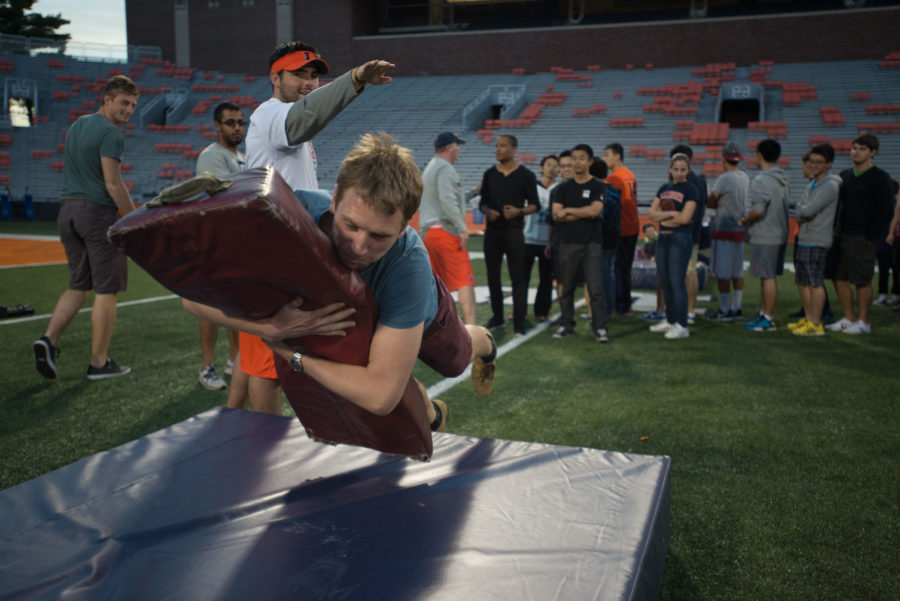 David Grömling, senior in engineering and exchange student, performs a tackling drill. University students from all around the world gathered at Memorial Stadium on Wednesday to learn about American football, which was taught by Coach Tim Beckman and the football coaching staff.

The night finished with participants forming a circle on the midfield “I,” swaying along to Hail to the Orange. Though the crowd had diminished from its original size, the attempts at the chant were nonetheless strong and smiles aplenty.

It was yesterday under the lights that Illinois football, along with International Student and Scholar Services, hosted Football 101 at Memorial Stadium with some 500 attendees.

Starting at 6 p.m., the event was open to both international and domestic students, and provided a chance for students to learn more about American football.

Broken into three segments, Football 101 started with videos teaching the basics of the game. It continued as students participated in different drills such as field goal kicking and blocking under direction of Illinois coaches. The event concluded with participants converging on the midfield, learning cheers from Block I members and cheerleaders.

While it was head football coach Tim Beckman who introduced the event, it was Illinois football legend and new Director of Alumni and Former Player Relations, Juice Williams, who played a big part in leading drills.

Beckman stressed the importance of connecting student-athletes back to the University and it was here he introduced Williams to the crowd.

Williams, who led the Illini to its last Rose Bowl appearance in 2007, said he never had anything like this when he was a student, but was impressed with what Illinois has since done.

“It says to me that Illinois is taking the next step,” Williams said. “Not only the student-athlete, but the understanding. Those guys really catering to the student body in terms of understanding the sport. It’s a sport that everyone from around the Champaign area, they love, they’ve been supportive for years. But if you talk with individuals from different countries, they’re not really necessarily in tune to what’s going on football-wise. I think it’s a great idea for them to get involved a little bit. Any time you bring out pizza and free T-shirts, I think you get a large number.”

In its second year, the event built upon itself and worked in cooperation with additional international student groups such as the Chinese Student Scholar Association to make it more appealing.

And the results showed.

With the videos and cheerleaders added from last year, the participation doubled according to Karl Feak, Assistant Director of Marketing for Illinois’ Division of Intercollegiate Athletics.

“A lot of domestic students take it for granted that football is just part of the American culture,” Feak said. “So it’s really great for us to show students that might not have had that background what it’s about and get them excited.”

That excitement had some students practicing their throws even after the drills had stopped. And it’s led some students to think about coming to future games as well.

“The most famous sport here is football,” said Junlun Wu, of China, who is a graduate student pursuing his Masters in Accounting. “So I just wanted to learn something about football. Next time I watch this game, I’ll understand what’s going on.”