Thomas continues to work at the STAR position 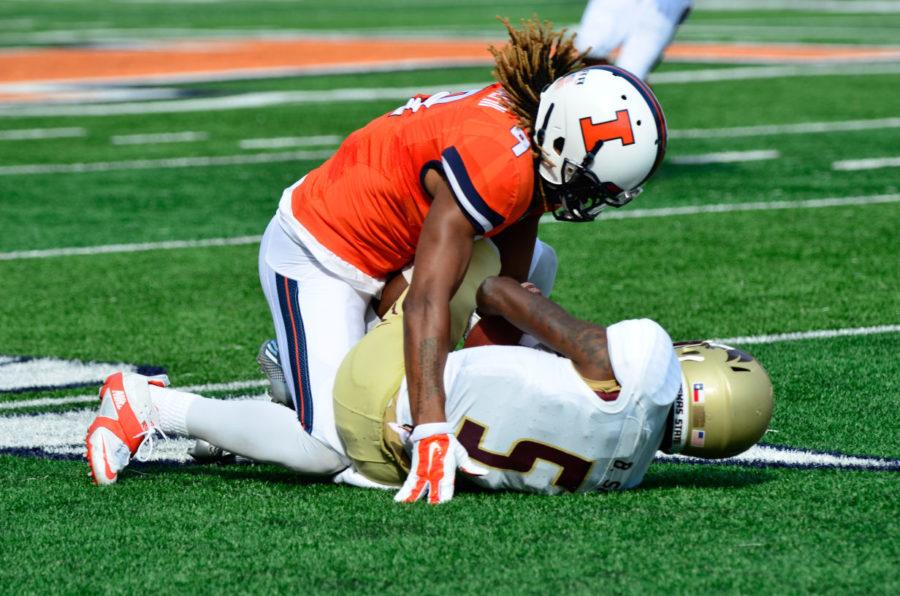 Senior Earnest Thomas III knows the Illinois football defense. Not just the ins and outs of his position, but more importantly, the mechanics of the entire defense.

It is this knowledge that has helped him transition to the STAR position after starting at strong safety last season.

“It wasn’t really a big adjustment for me at all,” Thomas said. “I pride myself on knowing this entire defense. So it wasn’t an adjustment mentally or something like that, I knew the position already. I’ve been playing it more full-time and I’ve been enjoying it. It gives (me) opportunities to do a lot of different things.”

STAR is a position coaches say requires a multidimensional athlete.

“You’ve got to be big enough, strong enough, fast enough and athletic enough to do all these things,” said Al Seamonson, who is the outside linebackers coach, but works with the hybrid positions. “You’ve got to play well against the run, especially on the perimeter, be a good blitzer and be a good tackler in space and in the interior of the defense based on how the offense is attacking. It’s a position where it’s hard to find the right guy.”

But Illinois seems to have found the fit in Thomas.

A member of the 2011-2012 team that beat UCLA in Illinois’ last bowl game appearance, Thomas calls himself a veteran.

“From Day One, I first wanted to learn my position and then learn everyone else’s around me,” Thomas said. “I learned that from older guys here before me. They taught me that to be a good player, you have to not only know your position, but know what guys are doing around you. So when I was able to learn not only my position, but also learn what the guys to the left and to the right of me were doing, it made me a much better player.”

Thomas credits former defensive back, teammate and 2012 graduate Tavon Wilson as one of the smartest players he’s played with when it comes to knowledge about the defense. It’s Wilson’s advice about grasping the overall feel of a defense that Thomas has carried and hopes to pass on now that he’s in a similar position as an older team member.

able to discuss each position after studying film. He understands the big picture.

“When you get on the field on game day after two-three days of hard practice, the game should actually be easier than the practice and come to you much more naturally,” Seamonson said. “As a coach you like that because it gives you a player-coach on the field, it gives you a guy that not only sets an example of how you have to prepare to do it, but also does that on the field. And you see those guys make plays on the field because it comes so much more naturally for them. They’ve already put themselves in that situation.”

And by putting himself in the situation, Thomas has adjusted to his new position, one he wanted to try last season. He only has 25 tackles this year, but has collected five and a half tackles for a total loss.

“It’s been pretty good,” defensive coordinator Tim Banks said. “He’s a guy who can do a lot of different things for us. He’s physical enough to play the run for us, but he’s athletic enough to play coverage for us. And that’s something that we lacked last year.”

For Thomas, knowing the defense is key. It has allowed him to be more familiar and comfortable on the field. And it’s something he hopes will carry on to future players, regardless of their position.

“The more you know on the field, the more things that are muscle memory, the faster you’re able to play,” Thomas said. “And I think we still, as a team, have to continue to take strides in that, but that’s not an overnight thing. It’s just constant preparation and constant study.”