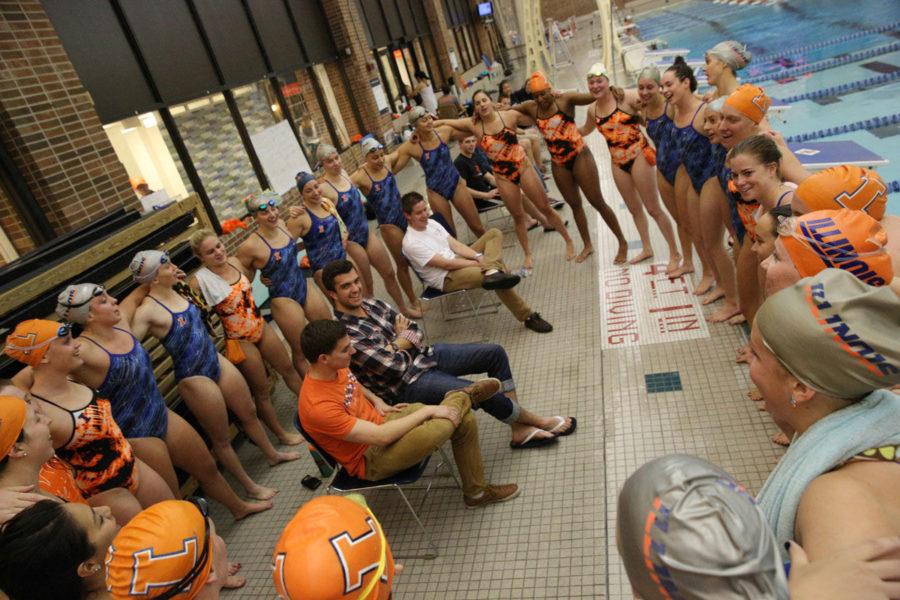 The Fighting Illini Swimming and Diving come together after the Orange and Blue Exhibition meet at the ARC, on Friday, Oct. 3, 2014. The Orange Team won 125-97.

Winning all but three of the 12 events, the Orange team finished with a score of 125-97.

With the season set beginning Oct. 17 against Northwestern, head coach Sue Novitsky used the exhibition to help prepare for the meets ahead.

“This will definitely help us put together our lineup when we’re going into Northwestern and it’s going to be a very competitive meet,” Novitsky said. “We can’t control what Northwestern does, but we’re going to keep making ourselves grow and become better.”

“It’s awesome to get some records out of the way, right away,” Meng said. “To get to compete against each other is awesome and fun … it’s all a good time for us.”

“It was a good start to the season,” Stratford said. “My hope is to make a NCAA qualifying A-standard and just work hard every day to make that happen.”

“We’re training really well right now and we’re a lot stronger,” Novitsky said. “I think we’re going to be able to surprise some people and be very competitive throughout the season.”