For O’Toole, it’s now or never 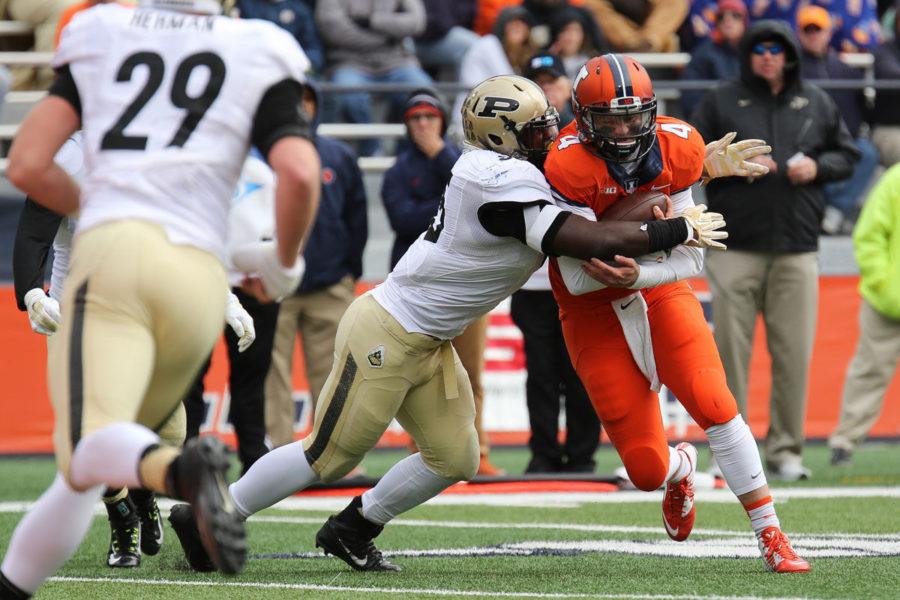 Illinois’ Reilly O’Toole is tackled after scrambling during the game against Purdue on Saturday. O’Toole, who will start in Saturday’s game against Wisconsin, has been the backup quarterback for Nathan Scheelhaase and now Wes Lunt.

Reilly O’Toole didn’t try to beat around the bush when asked what requires improvement.

Instead, the backup quarterback, who will likely start in place of the injured Wes Lunt on Saturday against Wisconsin, cut right to the chase.

There were no cliches — instead, a simple response.

“It’s pretty obvious what I need to work on, which is to take care of the ball,” O’Toole said. “That’s kind of been my thing all through college. I really need to concentrate on that now. I’m not just going in later in the game trying to make something happen. Now I’m playing the full game. I’ve just got to prepare and take advantages of all the opportunities.”

O’Toole has been in the backup role most of his time here, whether it was with former quarterback Nathan Scheelhaase or now Lunt.

He’s viewed the game from the backup role, but now he has another chance to demonstrate his senior leadership and improvement.

While he started in place of an injured Lunt at Nebraska, this week has been different in that news of Lunt’s injury was announced a week in advance — instead of prior to gametime, as in the Nebraska situation.

O’Toole finished that game 17-for-38 passing for 261 yards with one touchdown and three interceptions.

“I think he overcompensated for some things and tried to overdo (some things) instead of just doing what we need to do,” head coach Tim Beckman said. “I don’t think that’s just on Reilly, but I think the entire football team is trying so hard that the mistake comes from being over-aggressive.”

This time, he’s going into the game with more practice reps and a better sense of what to expect.

“I think Nebraska will help me out a lot and playing in that environment,” O’Toole said. “You can’t help but feel a little more comfortable after a game like that, but that was a great atmosphere. And this is going to be another great atmosphere against a great defense.”

He’s been to that place before when it was Scheelhaase who led the Illini at Camp Randall Stadium in 2012.

In a move that garnered internet buzz, Scheelhaase attempted to high-five one of the referees in the end zone after a touchdown, but was denied.

O’Toole remembers the moment, but said he won’t try anything similar.

“I don’t know,” O’Toole said. “I’m not one to find the end zone too often so I don’t know if that’s even going to be a possibility.”

It’s an honest answer that echoes his goal of getting a team win, rather than improving his own statistics.

For coaches, O’Toole represents a quarterback option who has experience and leadership capabilities. He’s a quarterback who has been through the changes the program has seen even if he hasn’t started.

More importantly, he’s used that position to help coach from the sidelines when he hasn’t started. Offensive coordinator Bill Cubit has said O’Toole has given advice to wide receivers and Lunt.

“We’ve only got one set of eyes,” Cubit said. “And there are so many things you can see out there, you need help. There’s nothing better than an experienced quarterback who can do it for you.”

For O’Toole, the chance to start this week is one with a bittersweet note. It means replacing Lunt, who he calls a great friend and his occasional roommate. The pair roomed together during Camp Rantoul and then again during some away games.

But as a senior, it’s a chance to soak up his last weeks in the orange and blue.

“It’s really scary to think about how the time has flown,” O’Toole said. “I feel like the other day I was just playing my last high school game in this stadium.”

O’Toole, a Wheaton Warrenville South graduate, was on three teams that reached the Class 7A championship games at Memorial Stadium.

So his attitude makes sense as he tries to carry the Illini this week.

Josh Ferguson, who redshirted one year but came in the same time as O’Toole, has seen the quarterback develop.

“He’s grown so much over these four years and hopefully that will be displayed on the field.” Ferguson said.