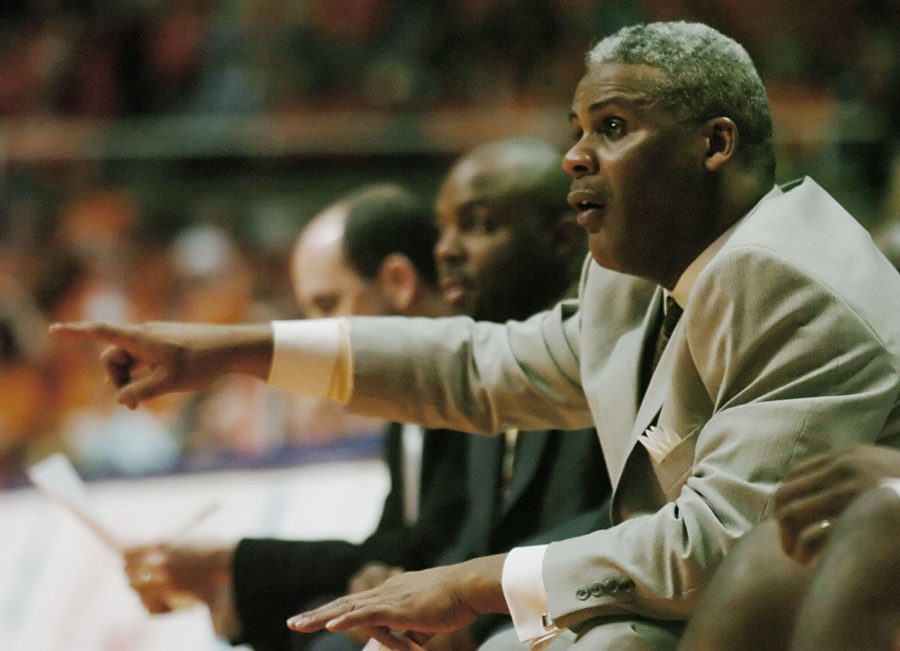 Former Illini basketball assistant coach Wayne McClain directs his players during the game against Minnesota at Assembly Hall on Feb. 3, 2007. McClain died Wednesday at the age of 59.

He is survived by his wife Robin, son Sergio and daughter Brindeshie. He was hospitalized with pneumonia earlier this week.

McClain served as an assistant coach at Illinois for 11 seasons between 2002-12, under former head coaches Bill Self and Bruce Weber. During his last three seasons, he served as the associate head coach under Weber.

At Illinois, McClain was a part of three Big Ten Championship-winning teams, including the 2004-05 team that finished as national runner-up.

McClain left Illinois to follow Weber to Kansas State after Weber was fired in 2012.

Last year, McClain took over as head coach at Champaign Central and led the Maroons to a regional title in his first season.

“This is a tremendous loss for not only our students, staff and families but for the community,” the Champaign Public School District said in a statement. “Coach McClain influenced the lives of many during his time at Central and impacted so many more during his long, successful coaching career.”

Prior to his time at Illinois and Champaign Central, McClain was highly successful in his seven-year career as head coach at Peoria Manual High School. Peoria Manual won three consecutive IHSA Class AA state titles in his first three seasons between 1995-97.

McClain coached Peoria Manual to a 94-5 record in those three years. The 1997 squad, led by future Illini Frank Wiliams, Marcus Griffin and McClain’s son Sergio, was named the National High School Champions by USA Today. McClain was named Illinois Basketball Coaches Association Coach of the Year in each of the three championship seasons.

Sergio McClain played at Illinois from 1997-2001. He was a member of four Peoria Manual state championships, including the 1994 title, when his father was an assistant.

Many former Illini coaches and players took to social media to express condolences.

“We lost a great individual,” former Illini forward Roger Powell Jr. tweeted Wednesday. “I am grateful for the time I had with coach McClain.”

“Sad day for the Illini Family with the passing of Wayne McClain,” added former Illini Brandon Paul. “Great Coach, Father, Husband and much more! Blessed to have been coached by him!”

“I’m very saddened by the passing of Wayne,” Weber said in a statement Wednesday. “I don’t know if I have ever been around a better man, whether it was with his family or with his players. He had such a huge heart and cared for so many people. He touched so many people’s lives from here (Kansas State) to Illinois to Peoria. To me, he goes down as an icon for basketball in the state of Illinois, whether it is in high school with the four state championships or helping Illinois win Big Ten championships and advance to the Final Four.”