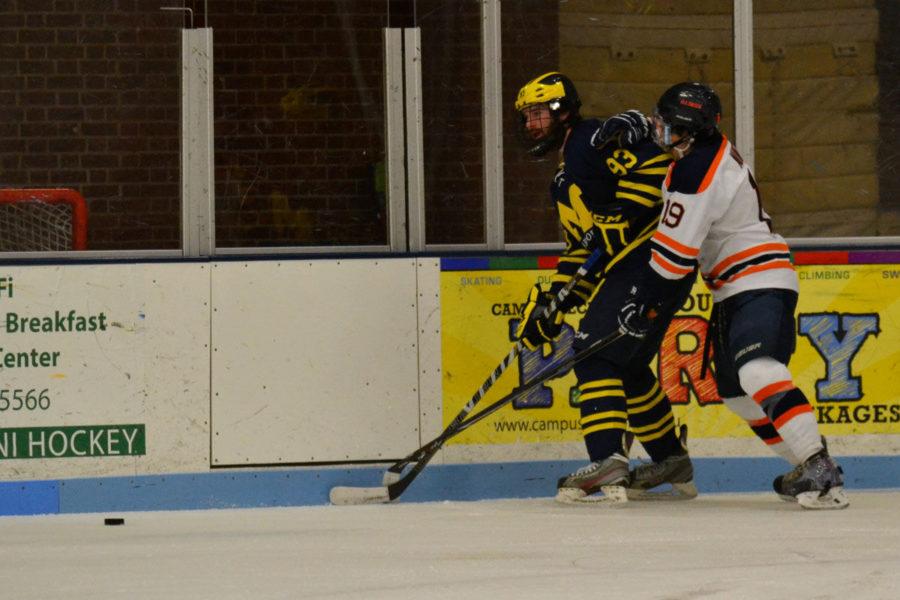 Illinois hockey’s William Nunez fights for the puck during the game against the University of Michigan-Dearborn on Saturday night. The Illini won 5-1.

Down two goals in the third period, the Illinois hockey team found a way to overcome adversity.

The Illini scored two goals in the final four minutes of the game against Michigan-Dearborn on Friday to send the game to overtime and eventually into a shootout. Forward John Olen scored the Illini’s only goal of the shootout, but it was all the Illini needed as goalie Joe Olen made all three saves for a 5-4 Illinois win.

“It was nice to get the three penalty shots because it felt like I let my team down a little bit during the game, and they brought it back for me,” Joe Olen said. “I felt like I almost owed them a little bit.”

Illinois (8-1-0-0) got its first win since its six game winning streak was snapped against Colorado State two weeks ago. The team would go on to sweep the series with a blowout 5-1 on Saturday.

Head coach Nick Fabbrini said the team played better on Friday than the score showed. Despite being outshot 39-21, the Wolverines capitalized on more scoring opportunities.

“It showed a lot of character scoring two goals in the last four minutes, but I think that was just a reward for all the hard work we put in through the first 55 (minutes),” Fabbrini said. “Even though we were down two goals, I thought we carried the play for most of the game. We just weren’t able to score, and they were pretty opportunistic by making the most of their chances.”

In the second game of the series on Saturday, the Illini maintained their lead throughout. John Olen contributed two goals in the win and said the team came out with a higher energy level on Saturday.

After letting up costly goals in the game on Friday, Joe Olen let up only one goal in the second period on Saturday. He gave credit to the protection provided by the defense, which limited the Wolverines to 27 shots in the game compared to Illinois’ 37.

Fabbrini said play in goal and the defense was a key factor in the games over the weekend, particularly the team’s ability to hold off the Wolverines on power plays. Michigan-Dearborn had 25 power play goals heading into the series against the Illini but didn’t score any over the weekend.

“I think we really wore them down,” Fabbrini said. “They are definitely not used to playing on an ice this big, and I don’t think they’ve ever played anybody that skates as well as we do.”

The Illini will get their first chance against a CSCHL opponent when they takes on Ohio at the Big Pond next weekend. Joe Olen believes that if the team keeps playing the way it has been then it shouldn’t have any issues moving forward.

“We’ve progressed to harder and harder games as the season has gone on,” Joe Olen said. “I think we are ready for the test.”