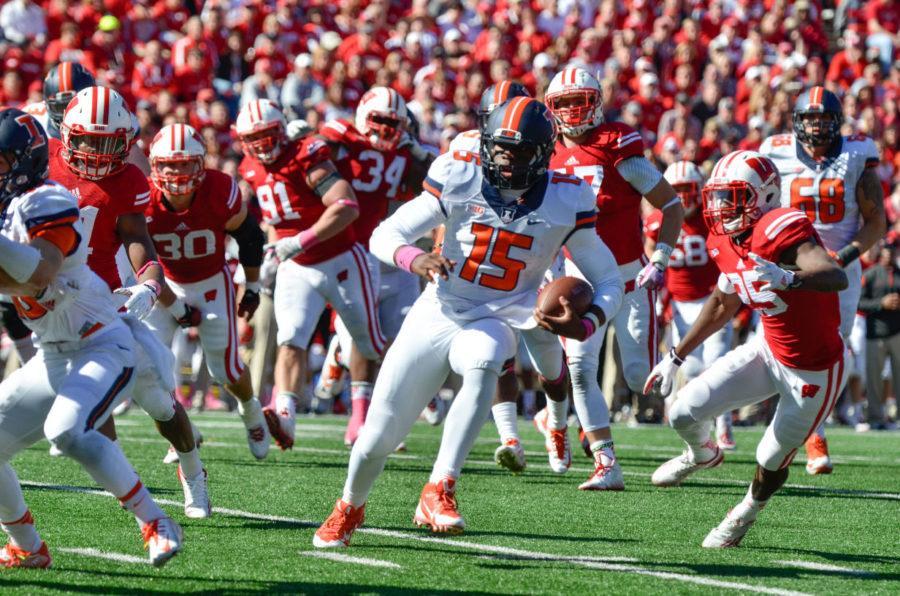 Illinois' Aaron Bailey (15) runs the ball for a touchdown during the game against Wisconsin at Camp Randall Stadium in Madison, Wis. on Oct. 11. The Illini lost 38-28.

Amidst the hype surrounding new uniforms, a parade and a pep rally, the big focus this week for Illinois football will be battling Minnesota in Saturday’s 104th Homecoming game.

Coming off a bye week, the Illini are looking for their first Big Ten victory this season.

“You’ll see both of them this week,” head coach Tim Beckman said. “Anyone that gets on that football field is someone we think can win a football game for us. We have capabilities with two quarterbacks that have shown that they can run an offense. I think for (Minnesota) to prepare for two is always a little bit more challenging than just to prepare for one.”

Both O’Toole and Bailey played in the team’s last game, a 38-28 loss to Wisconsin.

O’Toole was 12-for-19 passing for 96 yards and two touchdowns, but was sacked four times. Bailey went 2-for-5 passing with one interception and 39 passing yards. He led the Illini in rushing with 75 yards on 12 carries and one touchdown.

Though the Wisconsin game was his first time playing all season, Bailey feels confident about coming into Saturday knowing he’ll get time on the field.

“I feel great about it,” Bailey said. “I’m just waiting for my opportunity. I don’t know who is playing first and I really don’t care, I’ll just get out there and do what I have to do when my time comes.”

Minnesota is coming off a 39-38 win against Purdue that helped it remain undefeated in Big Ten play.

Running back David Cobb rushed for 194 yards and a touchdown against the Boilermakers. While the Gopher’s running game ranks in the middle of the Big Ten, their passing offense ranks last in the conference.

For Illinois, the challenge will be stopping the running game while watching out for the play action, according to defensive coordinator Tim Banks.

But it will also be about using whatever and whoever it takes to stop Cobb.

“Whether it’s a defensive lineman getting off the block, linebackers getting down field, safeties fitting inside, out of corners, coming off the edges — you know everybody,” Banks said. “Everybody has a chance to get this guy on the ground because we need to know where he is.”

While the bye week was a chance for Illinois to work with the two quarterbacks, it also gave Minnesota a chance to catch up on Illinois’ playbook. Saturday will be an opportunity for the Illini to come out and possibly surprise again with two different quarterback styles to prepare for.

“You just can’t run two plays, three plays out there,” offensive coordinator Bill Cubit said. “But it’s not as easy as everybody thinks it is and just go in there and run the same plays. Wisconsin, they were practicing against a certain offense. And I know this first-hand because it was told to me afterward and the other thing gave them confidence. Well now, it’s on tape. So they’re going to game plan against that.”