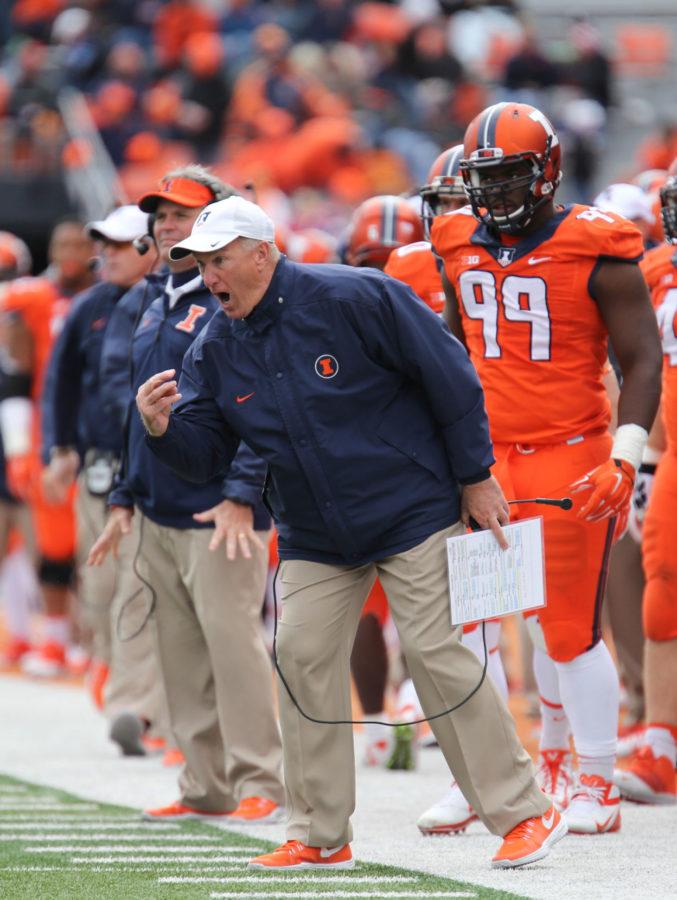 Illinois' offensive coordinator Bill Cubit communicate to his team during the game against Purdue at Memorial Stadium on Saturday Oct. 4. The Illini lost 38-27.

When Illinois’ leading receiver ran through the backfield and took a hand-off on a reverse, it was something new, but nothing outrageous.

Then when he launched the ball down the field for a 22-yard completion, it took Illini fans by surprise.

Freshman Mike Dudek hadn’t thrown a pass in a game since middle school. His pass to wideout Geronimo Allison in the first quarter of Saturday’s 28-24 win over Minnesota was just another example of the creativity the Illini offense has began utilizing since starting quarterback Wes Lunt went down with a fractured fibula in early October.

Offensive coordinator Bill Cubit is known for his creativity, whether it’s calling a big trick play like Dudek’s 22-yard pass or as simple as a series of quick screen passes to catch the defense off guard.

“You hope to be a creative mind when you’re in this business,” Cubit said. “You can never get stale.”

The Illini offense was forced into uncomfortable territory after Lunt’s injury, having to shift the offensive guidance to quarterbacks Reilly O’Toole and Aaron Bailey.

O’Toole and Bailey offer an opportunity for the Illini to rush more often, whereas the gameplan under Lunt was to beat defenses through the air.

Illinois head coach Tim Beckman joked after the game that the offensive coordinator’s “probably got 10 or 11 CDs” of trick plays.

When the coordinator decided to call Dudek’s number, the freshman said he became nervous.

Dudek said Cubit will come up to players on the sideline to let them know he’s going to call a play they don’t typically run every game. In this instance, the coordinator also had to calm the freshman down. Dudek said he had made a handful of bad passes when practicing the play earlier in the week.

“I’d just throw a duck, and it’d hit the ground,” Dudek saod with a laugh.

The first quarter play aligned with Cubit’s preference in making creative calls earlier in games to throw off the defense out of the gate. Later in the game, the coordinator said it’s best to follow with traditional play calling.

“It gets to a point where you’ve got to play some football,” Cubit said. “Now it’s, ‘What’s up next? What are they doing here?’ and then boom, we just run at them.”

On Sundays, Cubit sits alone in his office for six or seven hours figuring out plays for the next week’s game. On weekdays, he said he’s there from seven in the morning until the team’s afternoon practices.

The coordinator gives the Illini players a new gameplan every week, which often features an itinerary of mostly new plays.

“He loves catching the defenses off guard,” O’Toole said. “That’s what you’re going to see from him. He’s an offensive mastermind.”

The offensive coordinator doesn’t have every play he’s ever called logged in books in his office, but he said it’s tough to forget the ones that work. It’s hard to imagine he’ll forget Dudek’s pass to Allison — another play logged in Cubit’s memory.

“It’s all up here,” the coach said, pointing to his head and smiling after defeating Minnesota.

Heading into a night game at No. 16 Ohio State — one of the toughest settings in college football — the Illini are hoping Cubit’s offensive mind can create another successful gameplan.