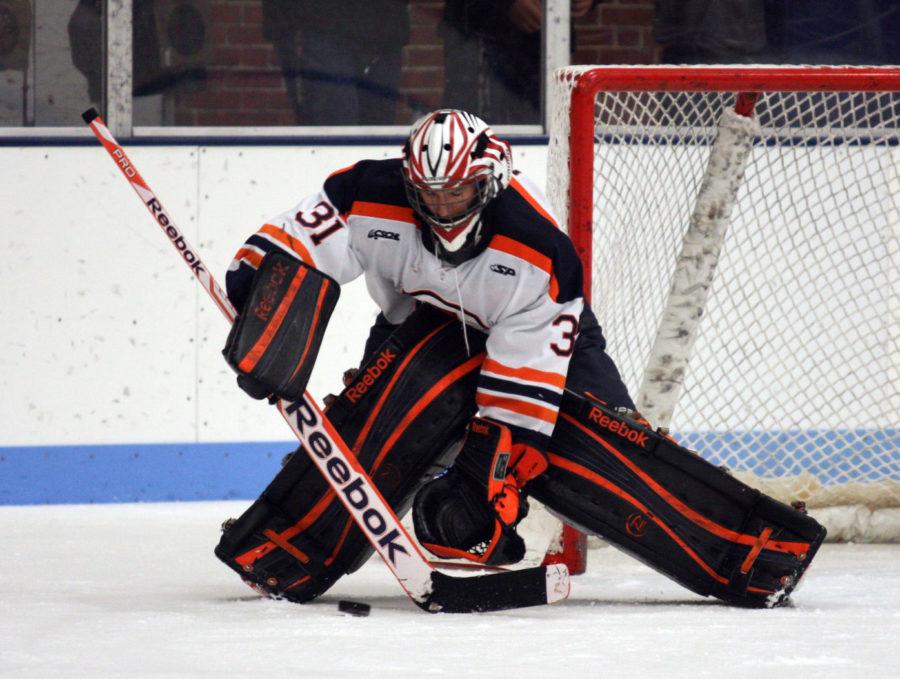 Illinois’ Joe Olen stops the puck during a game against Ohio last Friday. Olen is suspended from the game against Lindenwood on Friday.

The Illinois hockey team will take to the road this weekend and play for its first away series against a division opponent.

Lindenwood will host the Illini for a pair of games, one Friday and one Saturday.

Illinois is coming off a highly competitive weekend against rival Ohio. The Illini were able to split the weekend matchup, but head coach Nick Fabbrini said the team didn’t play its best against the Bobcats.

Assistant coach Tom O’Brien said the Illini’s penalties in a 4-2 loss to Ohio cost them the contest and emotions are something the team will need to get under control.

“The guys that took some penalties that they shouldn’t have are definitely paying for it right now during practice,” O’Brien said. “The penalties started off as bad, and now it is directly responsible for a loss. It has to be taken care of. There isn’t really anything to do besides punishing the guys that were committing penalties. They have to take it upon themselves to do what they are supposed to do and put their teammates first.”

While O’Brien doesn’t expect the Lions to have the same defensive success as Ohio, he does anticipate a stronger offense that will create more shot opportunities than the Bobcats.

Ohio shot the puck a total of 80 times over the weekend against Illinois. Goalie Joe Olen saved 43 of the 44 shots fired at him in the first game of the Ohio series, but he will be suspended for Friday’s game after leaving the bench late in the loss to the Bobcats.

Sophomore Zev Grumet-Morris will play in goal this Friday with Olen expected to return for the series finale on Saturday. While the team will be missing Olen’s experience in net on Friday, O’Brien believes that Grumet-Morris is capable of filling that void.

The Lions are coming off a weekend sweep of Robert Morris University — a team that was ranked No. 6 in the ACHA heading into the series. Despite being 5-4-1 on the season, Lindenwood is currently on a five-game winning streak and is undefeated in conference play.

Freshman left wing Eric Cruickshank said the team hasn’t been doing anything differently in practice this week gameplan-wise. The Illini have been  preparing to take on an opponent that plays on a smaller rink than the Illinois Ice Arena, but Cruickshank believes that this shouldn’t be too much of an issue.

“Usually what we’ll do is bring mats out, and we will just make the ice a little bit thinner,” Cruickshank said. “We have been playing on smaller rinks our whole lives. It’s not that big of an adjustment. It looks like a big adjustment because the rink is so big. Once, you get out there, you get used to playing on the smaller ice again.”

Cruickshank leads the team in assists with 10 and said the team will need to create more offense this weekend after getting outshot against Ohio. He believes that the team now has a better sense moving forward of where it stands relative to the other CSCHL teams.

“I definitely think that after splitting with Ohio, it shows us where we stand knowing that Ohio is one of the better teams in our division,” Cruickshank said. “It means we can play with those top teams, and we can do well in the conference play. I think we are going to be good for the rest of the year.”