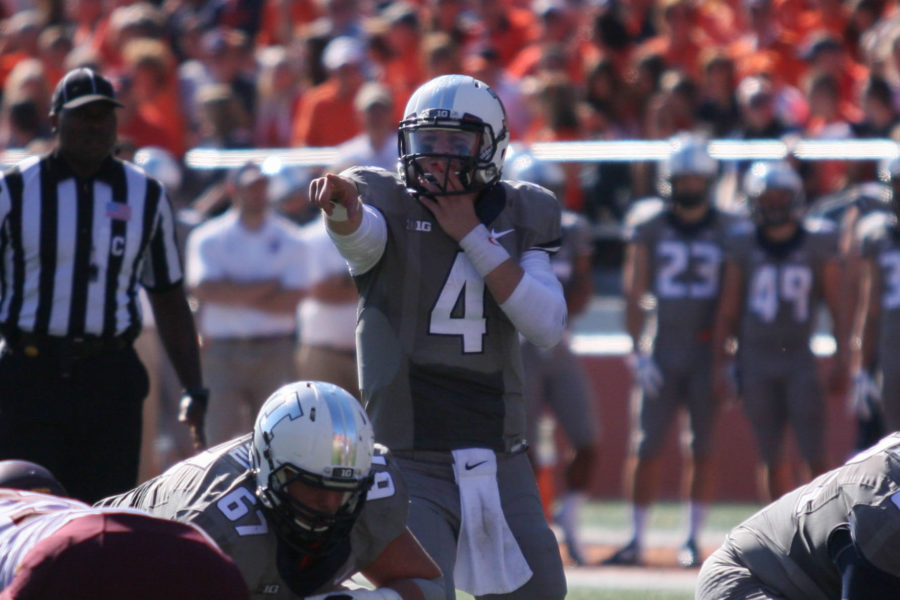 Illinois’ Reilly O’Toole makes a call to the line during the homecoming game against Minnesota on Saturday. The Illini will play the Buckeyes this Saturday in Columbus.

The last time Illinois beat Ohio State, Juice Williams was at the helm of the Illini. The quarterback, a sophomore at the time, would become the Big Ten Offensive Player of the Week for leading the Illini to a 28-21 victory over the No. 1 Buckeyes at home.

Now seven years after that 2007 game, Williams, in his first year as director of alumni and former player relations, has offered his perspective to current players. Many players will take this advice into the Illini’s Saturday matchup against the No. 13 Buckeyes in Columbus, Ohio.

“Anytime you beat Ohio State at Ohio State, it’s a big deal,” quarterback Reilly O’Toole said. “It’s proven that he’s been successful. Anything that he says about anything, not even just the Ohio State game, you take with heart because he’s such a legend around here.”

While time has passed and Illinois (4-4, 1-3 Big Ten) has lost to the Buckeyes five times since that fateful win, Illinois is looking to add another win to its schedule and break Ohio State’s 19-game regular season Big Ten winning streak.

The Buckeyes (6-1, 3-0) are coming off a double-overtime win against Penn State.

Ohio State has played with redshirt freshman quarterback J.T. Barrett, who replaced injured three-year starter Braxton Miller at the beginning of the season. Barrett has helped the Buckeyes put up the No. 2 scoring offense and No. 3 total offense in the Big Ten, going 119-for-183 with 1,689 yards and 21 touchdowns through the air.

“They look like the same guys to me — very, very good,” defensive coordinator Tim Banks said. “Very athletic. (Barrett) throws it a little bit better than you think he would as a freshman, but they utilize him the right way. He’s a great player, we’ll have our work cut out for us.”

Ohio State head coach Urban Meyer announced on Monday that Barrett has a sprained MCL and would be limited in practices leading up to Saturday’s game. He is still expected to play against the Illini; he finished the game against Penn State.

No one has been named the starting quarterback for the Illini yet, but the temporary competition for the starting job seems to be over. After his performance on Saturday, it is likely O’Toole will start for the Illini. O’Toole went 14-for-21 passing with one touchdown and 118 yards in the win against Minnesota. He rushed for 59 yards on 17 carries and one touchdown.

The Illinois offense will face the fourth-ranked defense in the Big Ten.

“It’s a typical Urban (Meyer) football team,” head coach Tim Beckman said. “A lot of the same things he’s done throughout a lot of his years as a head football coach: very talented, a lot of speed … They’re very, very athletic on defense, more than I’ve seen them.”

One hundred forty passing yards and four touchdowns and 70 rushing yards on 16 carries made Juice a legend at Illinois. The coaches are hoping his story will inspire another upset.

Charlotte can be reached at [email protected] and on Twitter