Hockey team swept in away series against Lindenwood 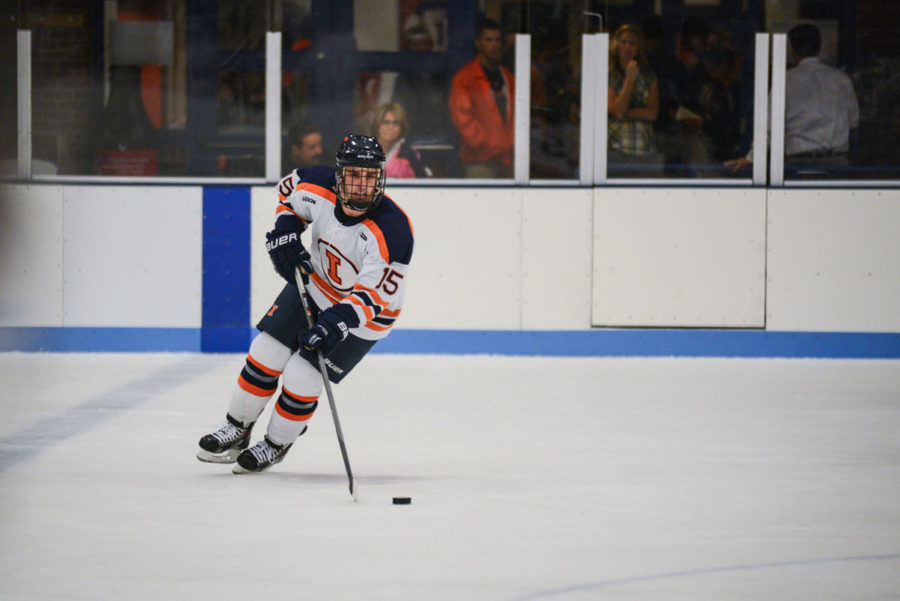 Illinois’ Eric Cruickshank (15) maneuvers himself towards the goal at the Illinois Ice Arena on Sept. 27. The Illini were swept in two games against Lindenwood this past weekend.

After starting the season out strong, the Illinois hockey team now finds itself in a slump.

The Illini were swept for the first time this season against Lindenwood — losing 5-0 and 2-1 on Friday and Saturday, respectively.

Friday’s loss marked the team’s largest margin of defeat this season. The Illini fell behind midway through the first period when Lindenwood’s Peppi Sipila scored a shorthanded goal. The Lions finished the game with their first shutout of the season.

Head coach Nick Fabbrini was disappointed in the Illini’s effort on Friday and believes that the team gave away four of the five goals scored in the game.

“I thought we were pretty awful on Friday,” Fabbrini said. “We didn’t have a lot of energy and we made too many mistakes. We just didn’t even come close to executing the game plan. We didn’t really have any jump in our step at all.”

On Friday, the Illini were missing goalie Joe Olen, who had started the last eight games. He was suspended for the leaving the bench against Ohio and was replaced by sophomore Zev Grumet-Morris.

Fabbrini said that missing Olen was not an excuse for the team to play poorly on the road against a division opponent, and Grumet-Morris made some big saves that gave the team enough chances to stay in the game.

Senior forward Jacob Matysiak said the team looked at the finale of the series as a must-win game for the Illini. Matysiak believes the formula for the team to be successful is to sweep at home and split on the road.

The team showed improvement on Saturday despite ending the first period down 2-0. Fabbrini said the team came out with more energy and the players were skating well, which is usually their strength. The Illini got their chances on the offensive side of the ice, but were not able to capitalize on their opportunities aside from a goal scored by left wing Eric Cruickshank in the second period.

“On Saturday night, I thought that we out-chanced them even though they outshot us,” Matysiak said. “I thought we had more chances, but we just didn’t capitalize.”

While the players were hard on themselves for their mistakes, Fabbrini blamed himself for the team getting outshot in both games over the weekend. Fabbrini said he will be looking to make line changes in hope of giving his team more opportunities to score.

The team will have a week to prepare for another tough matchup against NCAA Division III opponent Aurora University. Matysiak said the team will need to maintain its focus throughout the week if it wants to prove it can play with an NCAA opponent.

“Three losses in a row is not something that we want to happen again,” Matysiak said. “We have got to realize that the way we have been playing is not good enough. We just have to do better. We’ve got a sour taste in our mouth, and it will turn into something positive.”