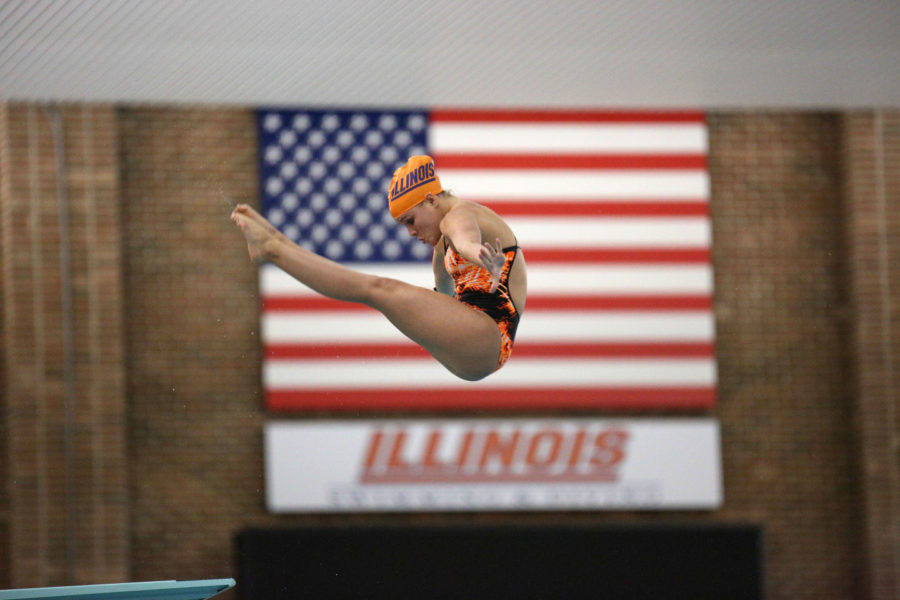 Illinois’ Raquel Corniuk dives from the 3 meter board during the Orange and Blue Exhibition on Oct. 3. Corniuk, a freshman, is one of the team’s highest scoring divers.

Executing on smaller details can provide a winning result for the Illinois swimming and diving team against Kansas on Saturday.

The Illini have been practicing on fine-tuning their swimming and diving techniques in preparation for what head coach Sue Novitsky considers will be a close meet against the Jayhawks.

“It’s going to come down to where everybody is racing their hearts out and diving as well as they can on the boards,” Novitsky said. “On paper, it’s coming down to a couple points, and if we have a swing in either direction by either team, it could really shift the momentum of the meet.”

Since the meet is expected to be close, Novitsky has told the team to continue building on the foundation it has established for itself. This foundation includes team camaraderie and staying committed to practicing the crucial fundamentals of their craft.

One of the fundamentals Novitsky likes to focus on the most with the team is quicker turns.

“It’s about carrying speed into that wall and committing to that turn so you’re not gliding in or slowing down or making any extra movements,” Novitsky said. “If you having strong starts and strong turns coming off each wall, you’re going to be putting yourself in a great position to finish well at the end of the race.”

So far this season, the Illini have been able to tally up a fair amount of points on the diving boards. However, the team has only recorded a first-place finish in one event this year, the 3-meter dive against Northwestern, won by sophomore Olivia Kassouni.

Diving coach Chris Waters said he expects the Illini’s top divers to compete and excel with the best of Kansas for the top spots this weekend.

The main focus at practice for divers has been zoning in on their spots.

“I’m trying to refine their spotting techniques … to get them (focused) in on their spot earlier,” Waters said. “Sometimes you tend to see it late and that effects your dive. If they see it early, they’ll have more time to adjust to their situation.”

Along with focusing on techniques, Novitsky said the team has upped the workload in the weight room, concentrating on areas of need such as leg strength. She is hoping the effort continues to bring good results.

“The leg work and Olympic lifts that we’ve been doing is definitely starting to pay off,” Novitsky said. “You’re starting to see those changes taking place.”

Coming off her first collegiate win last weekend, freshman Gabrielle Bethke has noticed the immediate impact the coaching staff has made on her.

“Since I’ve (arrived), the coaches have helped me work on my technique a lot, which has transferred into my races already,” Bethke said.

In particular, Bethke credits the coaching staff for teaching her techniques on sprint freestyle swimming.

The Illini will find out how much the training is paying off when they travel to Lawrence, Kansas, this weekend.