Comparing the quarterbacks as Lunt prepares to return 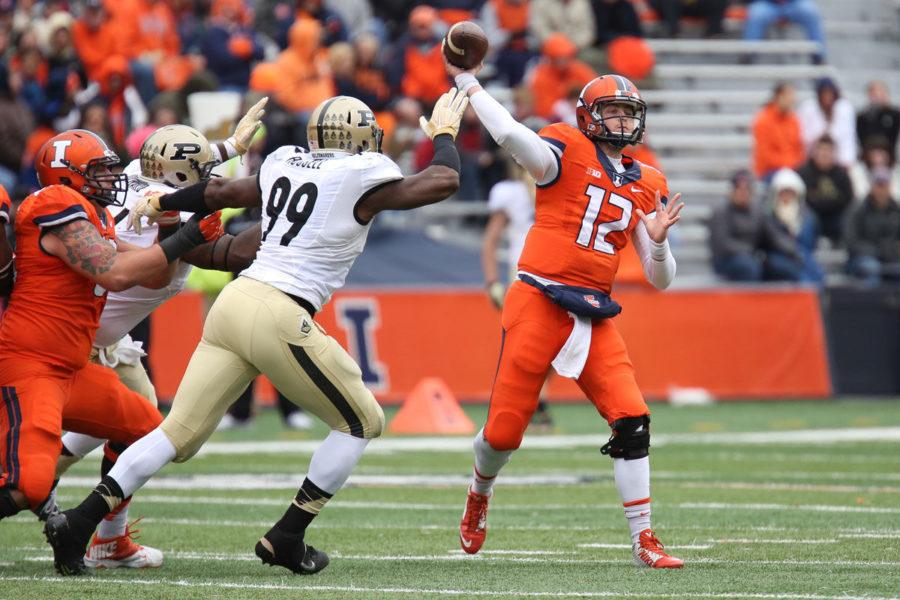 Illinois' Wes Lunt attempts a pass during the game against Purdue at Memorial Stadium on Saturday Oct. 4.

The summer months set up a quarterback question that the Illinois football staff dodged until 10 days before the season’s start. The job went to sophomore pocket passer Wes Lunt, who beat out senior Reilly O’Toole and sophomore Aaron Bailey.

Halfway through the season, a fractured fibula sidelined Lunt and forced the offense to make adjustments.

But Lunt, after missing four of the last five games, is set to start Saturday for the Illini in their game against Iowa.

“He (Lunt) was back last week. I’m a firm believer that an injury really can’t take your starting position. You deserved it,” Beckman said. “The injury was a unfortunate incident that happened. If he is healthy, which he is, he’ll be our starting quarterback.”

Though O’Toole has played in every game, it was Lunt who led the passing offense. O’Toole took over in Lunt’s absence and the team utilized a more run-oriented gameplan, but wasn’t able to record as many rushing yards per game as it was when Lunt was playing.

While Lunt has been working out every day and began throwing to trainers last week, he acknowledged it’s a little difficult to get back in the rhythm of throwing passes to wide receivers.

Freshman wide receiver Mike Dudek is looking forward to having Lunt back in the game, though he admitted he felt confident with any of the quarterbacks. Illinois’ top receiver has had a record-breaking season courtesy of his quarterbacks.

“It’s exciting,” Dudek said. “You all saw how great (Lunt) was doing before he went down and got hurt. So any time the starter comes back in the lineup, as a receiver you’re pretty excited.”

Now the Illini are faced with the challenge of getting back to that style of offense.

“There’s a sense of urgency with all our kids now in terms of the passing game,” offensive coordinator Bill Cubit said.