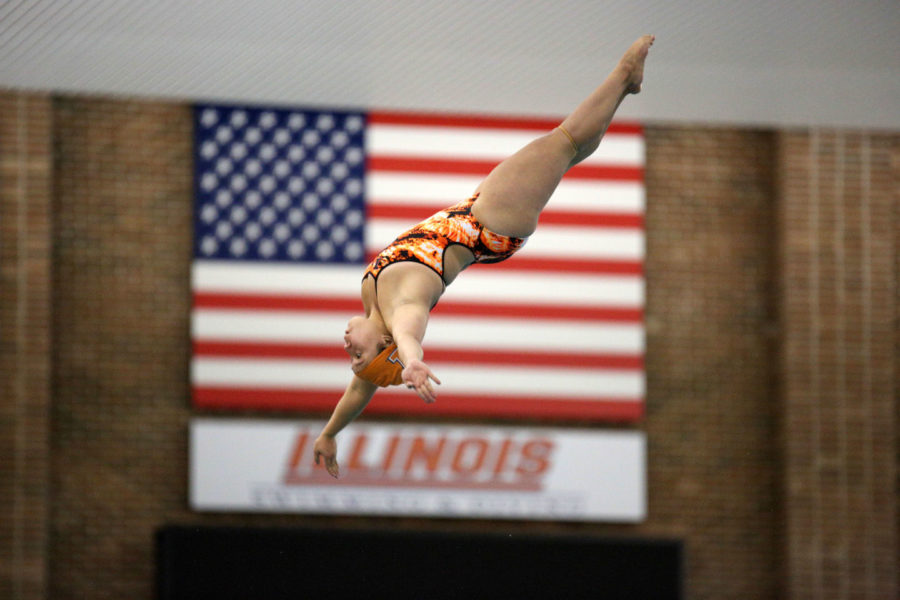 Illinois’ Emily Fung dives from the 3 meter board during the Orange and Blue Exhibition meet on Oct. 3. The diving team, which has three first-place finishes on the year, has provided the swimmers extra energy when they need it the most.

At this point in the season, the Illinois swimming and diving team relies on confidence and momentum to push its tired legs.

At 3-2, the Illini head into South Bend, Indiana, Friday to face Notre Dame after a slim loss to Kansas last Saturday.

The meet looks to be a test of stamina for Illinois. Head coach Sue Novitsky said the past few weeks at practice have been the toughest thus far.

For senior Alison Meng, who is predicting a close meet against the Irish, blocking out the pain is vital for the team during this weekend’s meet.

“Practice has been getting a lot harder,” Meng said. “Learning how to swim with that pain in a close meet is going to be the No. 1 priority.”

Because of this, Novitsky reminds the squad of its latest achievements in order to keep its psyches positive enough to block out any fatigue.

If that does not work, the next form of combat is simple. You swim through the pain.

“You remind them that they’re tired right now, but they’re supposed to be tired,” Novitsky said. “They have to pretty much deal with it.”

With three first-place finishes on the year, the diving squad has remained confident throughout the season, while providing the swimmers with an extra boost of momentum when needed most.

“They can really give us that momentum swing at a very critical point of the meet where events fall,” Novitsky said of the divers. “It’s nice that they are putting up some pretty consistent performances.”

At times, the swimmers do not have the opportunity to watch the diving action. However, this past weekend, the team witnessed the action on the boards since the diving took place during the team’s swim breaks.

Even though the team doesn’t need to observe the diving action in order to get a morale boost, Meng said it was nice to see the action for a change.

“When diving does awesome, it’s just another thing that gets us going,” Meng said. “After those two wins (against Kansas), we were pumped and wanted to continue our success the same way the divers were.”

Last weekend, the team lost by three-hundredths of a second. With this meet predicted to be tight, the Illini are going to need to use every bit of energy they have left in the reserve tank in order to have orange and blue be the first colors that touch the wall and claim victory.