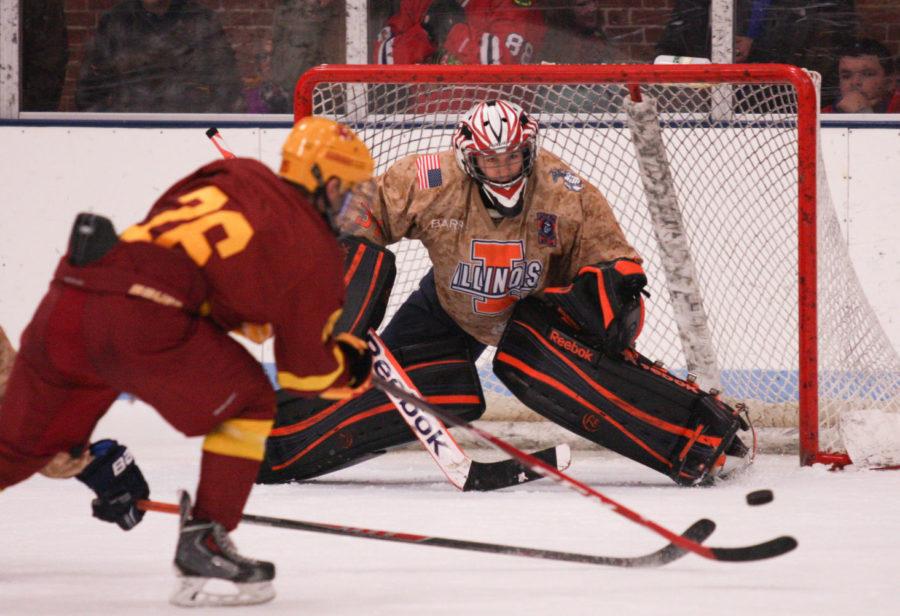 The shout from the Iowa State locker room could be heard loud and clear Friday night.

“I can’t believe we just lost to the worst team in the league!”

The Illinois hockey team had just defeated the Cyclones, a CSCHL division rival, in the series opener, and was one night away from completing its first sweep of a division opponent this season. The Illini had little time to celebrate before turning their attention to Saturday night.

The opener was a hard fought game, with neither team able to put the puck in the net in the first period. Iowa State scored its only goal of the game off a power play early in the second, and kept the Illini from shooting for nearly five minutes, but forward Yoshi Shibata evened up the game midway through the period.

Heading into the third period tied, the Illini displayed a revamped aspect of their game: the power play. It was an area of their game that the Illini focused on during practice, and it paid off when left wing Eric Cruickshank took advantage of an Iowa State roughing penalty and gave the Illini the lead. Two minutes later, forward John Langan added an insurance goal to seal the 3-1 victory.

“I think that was one of the most complete games we have played all year,” Cruickshank said after the series opener. “Coach talks a lot about playing 60 minute games, and I think we pretty much nailed almost all of it.”

After a come-from-behind victory on Friday, the Illini played with the lead throughout their series finale. The team got two quick goals in the first period from defenseman Austin Okuno and center John Olen, who scored the team’s second power play goal of the weekend.

“We have some success metrics, and scoring the first goal is number one on that list,” Fabbrini said after the series finale. “Games are significantly easier when you are ahead one earlier instead of chasing them. It’s been a point of emphasis for us all year.”

Illinois wouldn’t score again for the rest of the game, but goaltender Joe Olen kept the Illini in the game with 32 saves, which included a penalty shot attempt in the third period.

Iowa State was awarded the penalty shot after the Illini jumped on top of the puck. Joe Olen’s save came at a critical time as the Illini only had a one goal lead midway through the third period.

“I try not to think about the score as weird as that sounds,” Joe Olen said. “I always try to focus on what I can control.”

Behind the play of their goaltender and defense, the Illini held on for a 2-1 victory despite being outshot 33-24.

After the game, not a single word could be heard from the Iowa State locker room, while the Illini blasted music and basked in the glory of sweeping a division opponent.

Illinois, however, will have little time to enjoy the victory before it has to start preparing to take on the defending national champion Arizona State on the road. The team will be a heavy underdog in the game, but Fabbrini doesn’t mind the Illini being underestimated.

“I don’t know if we have gotten the respect that I think we deserve, especially from league opponents, but that’s fine,” Fabbrini said. “If teams aren’t going to be prepared for us and are going to take us lightly, then we are going to hit them right in the mouth like we did this weekend.”