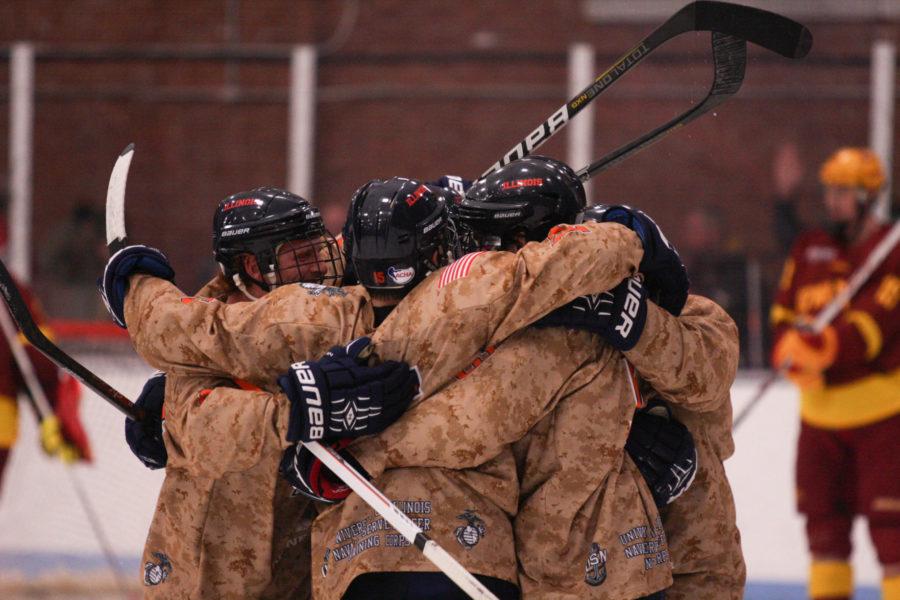 Illinois celebrates after Eric Cruickshank (15) scores a goal during the game against Iowa State at the Ice Arena on Friday, Nov. 14. Illinois won 3-1.

The Illinois hockey team was more aggressive than usual on defense this weekend against Iowa State.

The Cyclones only scored two goals over the course of the weekend, and the Illini kept them to 30 shots in the series opener Friday.

Illinois had been outshot in its past five games before Friday night. Left wing Eric Cruickshank attributed the shot discrepancy to defensive laziness because players wouldn’t pick up opposing teams on the forecheck. As a result, the Illini had to face a lot of odd man rushes in their own defensive zone.

“Coach has been harping on that a lot because we have had goals scored on us by guys coming in,” Cruickshank said. “I think we did a good job of picking guys up and stopping them from getting good shots on net.”

Illinois scored two power-play goals over the weekend in key moments of both games.

While he has praised the team’s penalty kill in the past, head coach Nick Fabbrini has said the power play is an area the team wanted to improve on. Fabbrini spent time changing up the lines that would be utilized on the power play, and his efforts paid off over the weekend.

“We had two guys battling in front of the net for position, making the goalie’s life difficult,” Fabbrini said. “And when we do that, we’ve got guys who can shoot the puck and put pucks where they want when they are shooting, so good traffic in front just makes it flow that much easier during the power play.”

Speed was a big factor in the Illini’s win

Even though the Cyclones were bigger than the Illini, Fabbrini believes his team had the advantage in its ability to skate.

Fabbrini acknowledged that Iowa State played a physical game, but he didn’t think his team was bullied by its opponent. Instead, the Illini made the bigger Iowa State players work even harder to prevent the Illinois rush.

Illinois’ bigger ice allows it to spread the puck around and utilize its speed.

“I think our speed gave them some problems, especially on the rush and on the forecheck,” Fabbrini said. “We are going to look to keep pushing the pace, and make those big guys move.”