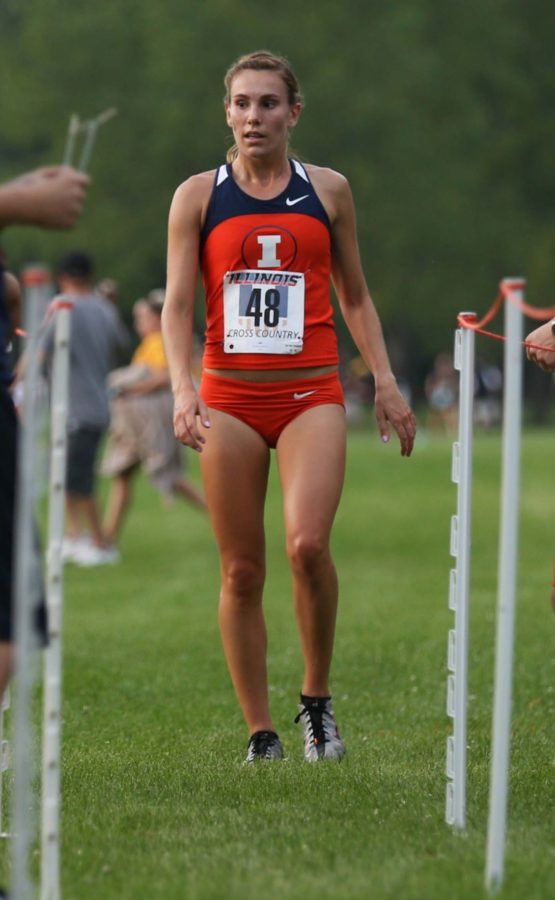 Alyssa Schneider earns the first place finish during the Illini Challenge at the UI Arboretum on Aug. 29. Schneider has finished first for the Illini in all except one meet.

She is the face of the Illinois women’s cross-country team. She is the lone runner on the team’s season poster. She has finished first for the Illini in all except one of the meets she has competed for the past two seasons. But if you saw her walking to class, you would have no idea who she is.

That is just the way redshirt junior Alyssa Schneider is. Many describe her as an introvert, but that doesn’t take away from her role as a team leader. With her quiet demeanor comes a dogged work ethic that has helped her earn all that she has in her life and that is an inspiration to the people around her.

“(Her work ethic) clearly indicates that she wants to do well,” sophomore runner Hanna Winter said. “That’s who she is and indicates the kind of person and leader that she is.”

But the road to running in Champaign did not come without its challenges. Schneider’s relationship with cross country began during her freshman year at Bartlett High School in Bartlett, Illinois. Her sister had been a runner, and despite Schneider’s hope to play volleyball and soccer, she decided to stick with cross country to make it easy financially on her family.

It didn’t take long for her relationship with the sport to blossom. In high school, she earned All-State honors in cross country in 2008 and in track from 2009-2011. Schneider was also named all-conference for cross country from 2008-2010 and earned four varsity letters in both cross-country and track.

With all the success in high school, Big Ten universities like Ohio State, Michigan State and Illinois came calling. Happy with the size of a Big Ten school, Schneider considered her options carefully when she made her decision.

“I really wanted to choose a school not just for its athletic program,” the mathematics major recalled. “I wanted to love the school that I attended.”

That love materialized after visiting Illinois. She wanted to compete for the Orange and Blue. She came to campus during the summer after graduation, excited for the next chapter of her life to begin.

But as the next chapter began, parts of the past continued to be an issue. Throughout high school and at the beginning stage of her collegiate career, she had to deal with a leg injury. Her shins were always sore after running, but she had always ran through it. That changed her freshman year of college.

In her first collegiate meet, the annual Illini Challenge, Schneider finished in 15 minutes, 27 seconds, the team’s second-fastest time. Despite the impressive finish, there was more concern than joy. The shins were an issue again. After racing in only one race, Schneider was granted a medical hardship waiver — she had a stress fracture in her shins — and redshirted her freshman year.

Many people in Schneider’s situation would ask questions. One race into her collegiate career and she already had an injury. Should she have dealt with the issue earlier?

“I did feel separate (from the rest of the team),” Schneider said. “I dug into the recovery process and the rehab. That wasn’t going to deter me; it was something that I was going to battle through.”

Former Illinois runner Katie Porada noticed the way Schneider responded to the injury. It’s what Porada believes defines Schneider not only as a runner, but as a person. She attacked the rehab and her goals so that she would be ready to run track in the spring.

“She learned from it and set her eyes ahead,” Porada said. “It was a process where she never counted herself out.”

In the fall of 2012, Schneider returned to cross country. It took her time to become adjusted with the long distances again. She finished at the middle spots for the team for most of the season, but made a big jump at the NCAA Midwest Regional.

Things were finally going well for the runner. With a summer to rest up, Schneider was excited for the upcoming fall.

Then things changed. In the summer of 2013, Jeremy Rasmussen, the head coach who helped bring Schneider to Illinois, left.

Ron Garner was named the women’s track and field head coach on July 19, but there was still uncertainty at the cross country helm. With no coach, each runner continued to do what was necessary to be ready for the season individually.

As August arrived, there was still no cross country coach. The runners began to worry as fall camp approached. Uncertainty faced the program. Schneider was ready to make her next move but didn’t have a coach to lead her.

On Aug. 19, just a few days before the runners were set to come onto campus to get ready for the season, Scott Jones was named the head coach.

Schneider led the team in its commitment to Jones’ more data-driven approach to the team.

“It was something that the team needed to do,” Schneider said. “Just because something was changing doesn’t mean you shouldn’t try it.”

After the changes were made and Jones and Schneider began to build a relationship, Schneider was finally ready to make her move. She placed first for the Illini in every race she ran. She finished fifth at the NCAA Midwest Regional and earned All-Regional honors with her 20:25 time, which was the fourth-fastest time in school history and qualified her for Nationals. She would finish 93rd at the national meet.

As she became the team’s leader on the scoreboard, Schneider also became the team’s leader off the course. Often described as an introvert by her teammates, Schneider leads by example. She takes care of her body, goes to all the workouts and makes sure to give it her all. Although not the most vocal person in the room, she will say the things that need to be said and help other runners when they don’t know what to do.

According to teammates and Jones, Schneider is welcoming to all new runners, and makes sure everyone is comfortable with Jones’ expectations.

This season, Schneider finished first for the Illini in every race she ran during the regular season. At the Big Ten Championships, she finished 58th overall, third-best for Illinois. At the NCAA Midwest Regional meet, she finished with the Illini’s best time (20:59) and 33rd overall.

Schneider has one more year of cross country eligibility left after this season. Even so, the end is approaching, something her teammates don’t want to think about yet.

“It will be hard (when Schneider leaves),” junior Amanda Fox said. “It’ll be hard at practice not having her drive.”

But there is still some work to do before the end comes. Although the success has been nice, there’s still much to attain. And as that time goes on, Schneider will work her best to make sure that it was worth it.

“When I do finally leave Illinois, I want to leave everything that I have.”

Michal can be reached at [email protected] and on Twitter @mdwojak94.