Illinois football still competing at all positions heading into bowl 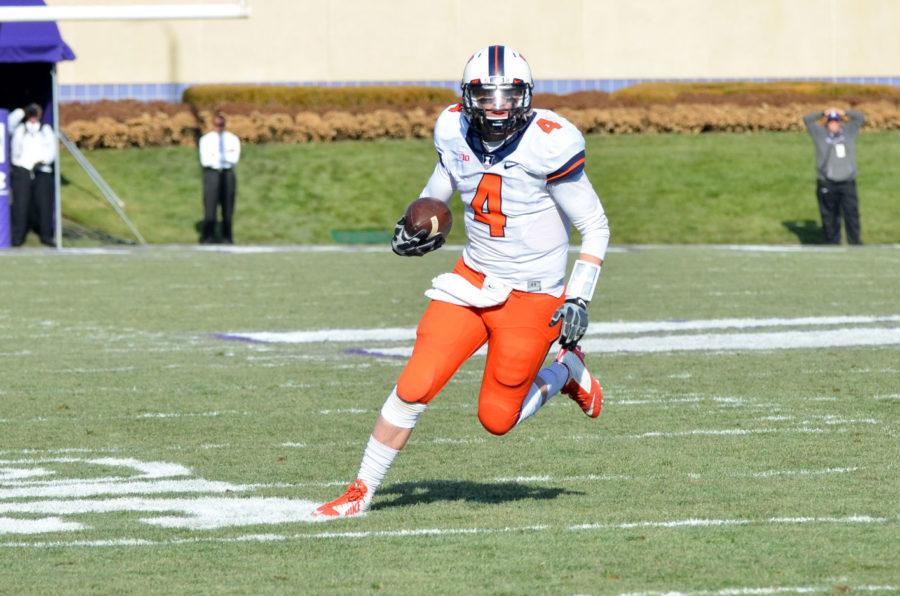 Illinois’ Reilly O’Toole ran for a total of 147 yards in the game against Northwestern on Nov. 29. A starting quarterback for the bowl game on Dec. 26 has not yet been named.

It will be a competition as usual for the Illinois quarterbacks as they prepare for the Zaxby’s Heart of Dallas Bowl on Dec. 26.

While it was senior Reilly O’Toole who stepped up to lead the Illini in its last two wins, head coach Tim Beckman stated that the coaching staff will “encourage those competitions” to determine the starter.

While O’Toole didn’t practice last week as the seniors had the time off, both Wes Lunt and Aaron Bailey threw during practices. Beckman said the two rotated between first and second string receivers as well to keep improving the passing game.

With O’Toole in at quarterback, Illinois has more of a balanced attack. Last game, O’Toole ran for 147 yards and finished the season with 261 rushing yards.

“Reilly’s really picked it up these last two weeks,” wide receiver Mike Dudek said. “He’s really put the team on his back and helped get those last two wins … He’s been a backup for most of his career and he’s really always the same whether he’s been the starter or been the backup, so I think that speaks highly of him.”

On the right track

With Illinois’ 6-6 finish (3-5 Big Ten) this season, the Illini qualified for a bowl game and Beckman will be back for another season after demonstrating the necessary progress, according to Illinois Athletic Director Mike Thomas.

While the focus right now is on preparing for the Zaxby’s Heart of Dallas bowl, it will take more than a 6-6 season for the football program to keep moving forward. But for now Thomas has confidence in Beckman.

“He’s our football coach,” Thomas said. “I like the direction of the program, but once again we have to continue to do the things that make us a more competitive football program. Not just play in bowl games, but compete in Big Ten championships … at a high level.”

Making an analogy to a baseball pennant race, Thomas said the program must be consistent, competitive and relevant. He added that if Illinois can build a foundation and tradition, the Illini won’t be talking about coming from behind every November.

“I’d rather not be 4-6 and have to win the last two games,” Thomas said. “It’s better to be the one being chased than to be the chaser.”