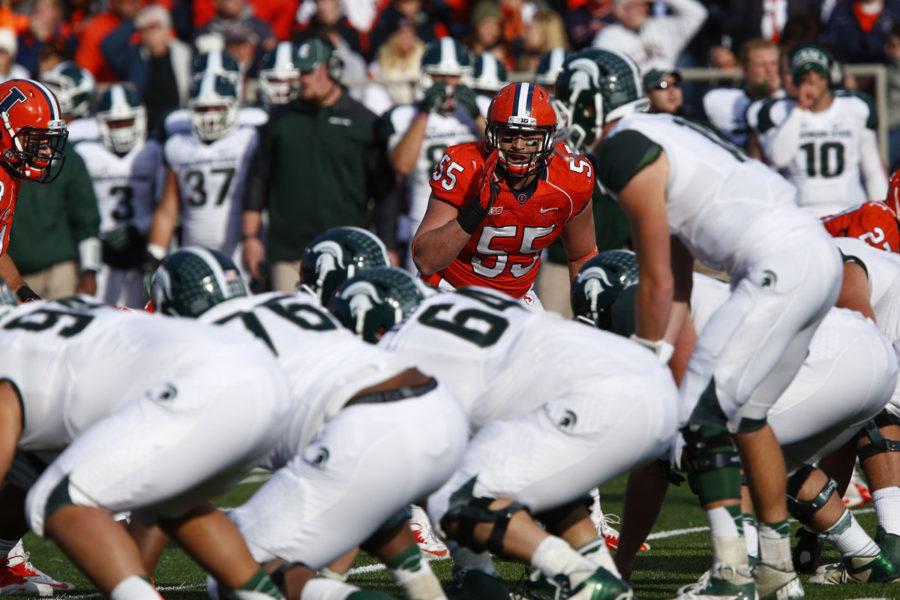 Illinois' Houston Bates (55) makes a call during the Homecoming game against Michigan State at Memorial Stadium in Champaign, Ill. on Oct. 27, 2013. The Illini lost, 42-3.

Reilly O’Toole sent a text when he found out the news.

Donovonn Young received a Snapchat, and Mason Monheim got a mix of both that he says basically the whole team seemed to receive.

The reason: all found out they would be playing their former teammate and his new ones at Louisiana Tech (8-5, 7-1 Conference USA) in the Zaxby’s Heart of Dallas Bowl on Dec. 26.

Those snaps and texts are just one of the many story lines taking hold as the Illini (6-6, 3-5 Big Ten) prepare to head to Dallas for their first bowl game appearance since 2011.

The last time Illinois faced Louisiana Tech, it was Beckman’s first season with the Illini in 2012. The Illini lost 52-24. At the time, the Bulldogs were coached by Sonny Dykes. In the win, Louisiana Tech forced six turnovers and scored seven touchdowns. After injury forced former quarterback Nathan Scheelhaase to the sidelines, Reilly O’Toole went 19-for-25 passing with 120 yards with no touchdowns.

This year, the teams faced only one common opponent: Western Kentucky. The Illini defeated the Hilltoppers 42-34, where the Bulldogs recorded a 59-10 victory.

Louisiana Tech is led by Cody Sokol, who transfered from Iowa over the offseason. The quarterback has played in all 13 games, completing passes at a 58.6 percent clip with 29 touchdowns and 13 interceptions. He’s helped lead the Bulldogs to 3,284 passing yards, but the team also ran for 1,966 yards.

“They’re similar to our last game, Northwestern, as far as offense,” sophomore defensive end Taylor Barton said. “We play in the Big Ten, so we’re used to a lot of running teams, and they’re a mixture of both. They’re pretty balanced, so it’s a little different in that aspect, but it’s something we game plan for.”

Illinois is heading into the bowl game with pressure to finish the season well. The Illini finished the regular season averaging 117.1 rushing yards per game and 243.2 passing yards per game, switching mainly between quarterbacks Wes Lunt and Reilly O’Toole.

With former teammates facing off, three Texas natives on the Illini roster, a former Big Ten quarterback guiding the Bulldogs and pressure to finish the season well, Illinois has a lot going on. But Young summed it up rather simply.

“It’s a revenge game,” the Texas native said. “I get to play against my old teammate. And I like playing teams from down south. It’s a little different taste of football, and I’m excited to see what these guys have got.”