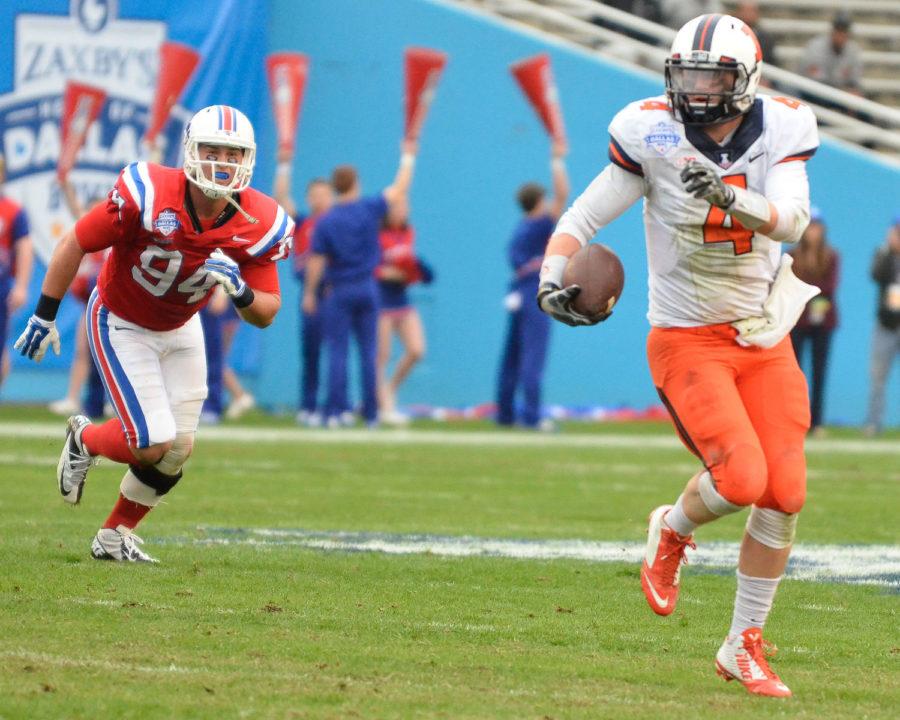 DALLAS — It was a group of quiet Illini football players that walked off the Cotton Bowl Stadium field after a season ending loss. A drastic change from the cheers and arm raising cries that greeted the Illinois fans as they walked onto the field.

Though Illinois out-gained Louisiana Tech in total offense and time of possession, it was a double fumble, a missed PAT, a pick-six and plenty of penalties that led to Illinois’ 35-18 loss to Louisiana Tech in the Zaxby’s Heart of Dallas Bowl in Dallas.

Illinois’ opening drive told the story of the game: two penalties for a loss of 21 yards capped off by a 9-yard loss and drive ending sack from former Illini Houston Bates. Bates finished the game with six total tackles and 4.5 sacks. He had 5.5 tackles for loss that combined for 35 yards lost. Bates was voted the game MVP.

Illinois missed two field goals and one extra point. The team also failed to convert on a two-point conversion attempt after a touchdown. The Illini finished the game with nine penalties for a loss of 68 yards.

Senior quarterback Reilly O’Toole led the Illini, going 24-for-39 passing for 295 yards, one touchdown and one interception, but was sacked six times. While backup Wes Lunt came into the game twice — going 4-for-8 with 34 yards — the team was under the leadership of the senior O’Toole.

At times, the quarterback was visibly struggling to stay on the field, taking hit after hit. But he opted to keep running, rather than sliding to end plays.

“Nate Scheelhaasse texted me yesterday, reminding me this was my last game ever,” O’Toole said. “He did the same thing in his (last) game, his senior year. Why not leave it all out on the field.”

O’Toole was intercepted by the Bulldog’s Xavier Woods for a 69-yard touchdown return in the second quarter with Illinois trailing 14-9. But it was a controversial no-call that had Illinois fans booing: Receiver Mike Dudek was grabbed and there was no penalty flag thrown.

“A lot of people told me I was getting held on that play, but I just try to run the routes to the best of my ability,” Dudek said. “The ref saw what he saw, he didn’t make the call and you just have to move forward.”

Though he didn’t make that catch, Dudek capped off a phenomenal first season, becoming the first Illinois freshman to top 1,000 yards (1,038).

Illinois trailed 21-18 in the fourth quarter when a double fumble would give Louisiana Tech the momentum. It was a third down when Jihad Ward picked up a Bulldogs fumble and ran 19 yards, but then fumbled the ball back to Louisiana Tech. Five plays later, the Bulldogs put six points on the scoreboard.

“We had a great stop there, really picked it up and were already in field goal range,” defensive coordinator Tim Banks said. “But we turned it over and it was disappointing. That wasn’t the reason we lost. That was just another play. It was just unfortunate.”

Though penalties and other missed opportunities hampered the Illini, this game was a chance for the Illini to show the season’s work and the outlook of the future.

“If I could sum up the season in just one word, it’d be ‘progression,’” running back Donovonn Young said. “Definitely progressing. I think the players and the coaches have been trying figure it out. We got a sense of what we need to do, but we just need to stick to it and we’ll be successful. There’s too much talent in there for us not to be going to bowl games year after year.”