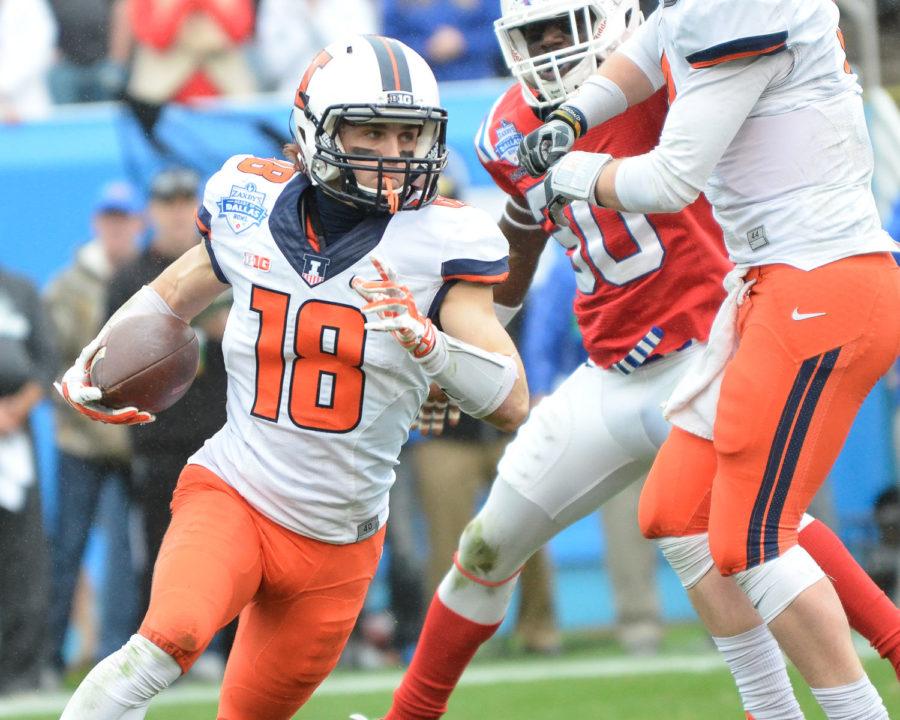 Illinois' Mike Dudek runs the ball during the game against Louisiana Tech at Cotton Bowl Stadium in Dallas on Friday. Dudek had seven catches for 73 yards.

DALLAS — While head coach Tim Beckman talked of the program’s future, for 17 team members, it was their last time playing in an Illinois football jersey and the emotion was evident.

At a postgame press conference, senior quarterback Reilly O’Toole answered his questions, but for the most part looked down to the table, rather than looking to a room of reporters.

The quarterback fought and was beat up on the field, getting sacked six times and tackled on his 18 rushes.

“He’s a warrior man, he’s a warrior,” said running back and fellow senior Donovonn Young. “When his helmet came off on the field, you could see just the passion. He was crying, he truly loved it and I’ll always remember Reilly for that.”

At their final postgame interviews, seniors such as Austin Teitsma, Earnest Thomas III and Young remained positive about the program as they talked about their last game. But they acknowledged that reality will hit later.

Beckman stressed the importance of the power this senior class had in focusing the team’s energy and motivation to getting to a bowl game. The coach said that each senior class has a different battle cry motto for the season and that next season he will keep the same one.

“That’s never going to change now. We will keep that because of what this senior class did for this football team in starting a drive to get us better and better each and every week,” Beckman said. “We owe it to these seniors to move this program forward. Of course (we’re) disappointed, but we’ll be back at it on Jan. 19.”

While the Illini ended up with a loss to finish the 2014 season, three wide receivers came out in full force, giving added hope for the Illini’s passing game next year.

Mike Dudek became the first freshman in Illinois history and only the eighth in school history to surpass 1,000 yards in a season and finished the game with 73 yards on seven catches. He finished the season with 1,038 yards on 76 catches and had six touchdowns.

Another freshman, Malik Turner, had a career high 84 yards on six catches. Geronimo Allison had four catches for 72 yards, which is the most yards he’s recorded since the Nebraska game on Sept. 27, when he recorded 118 yards.

“I think all three of those young men … have great futures in front of them,” Beckman said. “And they’re really excited. They’re workaholics, they work extremely hard to make themselves better. Reilly was getting the ball to them to make them successful. And we’re excited about those three joining us again, you know, we’ve got three more years with two of them and another year with G-Mo, so we’re excited that they’re back.”