Illinois hockey team swept on the road by Minot State 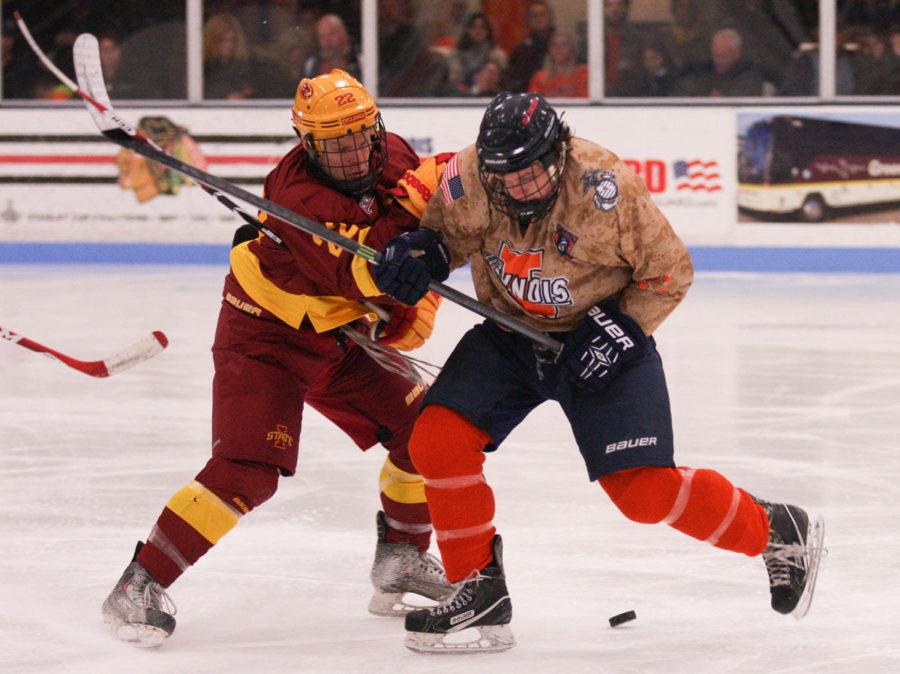 Illinois’ Kyle Varzino (27) and Iowa’s Alec Wilhelmi (22) both look for the puck during the game against Iowa State at the Ice Arena on Nov. 14. Illinois won 3-1.

The Illinois hockey team faced a tough road challenge this week against No. 4 Minot State.

The Beavers swept the Illini in a weekend series, extending Illinois’ losing streak to five games.

On Friday, the Illini allowed five goals in the second period that put the team in a deficit it couldn’t overcome. The Beavers’ offense was relentless in the game, taking 49 shots on goal.

Head coach Nick Fabbrini gave credit to goaltender Joe Olen for his efforts in net against Minot State’s high-powered attack. Fabbrini said he thought his team’s defense played well, but the Beavers’ style of play pushed the pace and led to so many shots on goal.

The Illini held firm against the Beavers in the third period and didn’t let up any more goals, but weren’t couldn’t generate enough of their own offense to make a comeback.

“On Friday, we played a great first period, and then we made some bad decisions in the second,” Fabbrini said. “We had some unfortunate bounces that knocked pucks into our own net. We played a decent third, but we weren’t able to come back into the game.”

The team showed improvements Saturday, but it wasn’t enough to avoid the sweep. Right wing Kyle Varzino was the lone goal scorer for Illinois, which took 36 shots in the game.

The Beavers, however, continued to push the offensive pace throughout the game, recording 54 shots, but they only managed three goals.

Illinois put itself in a position to take the lead several times throughout the third period while the score was tied, but it just couldn’t find the back of the net. The Beavers responded to the equalizing goal with one of their own three minutes later, and then sealed the game with a minute and half to go.

“We were better in all areas on Saturday,” Fabbrini said. “The energy and decision-making was much better, and we played better in our end. We had a couple chances in the third that really could have changed the outcome of the game and just weren’t able to capitalize.”

With the loss, the team extended a five-game losing streak that started with a division loss to Rhode Island on Jan. 3. Fabbrini said the team has made too many mistakes with regards to discipline and special teams.

On Friday, two of the five goals scored by the Beavers came off the powerplay, and the Illini had a total of 18 penalty minutes in the game on nine infractions. The Illini showed improvement on Saturday, recording only eight penalty minutes over the course of the game.

Fabbrini expects the team to rebound from its recent slide in a division series against Robert Morris Friday and Saturday at the Illinois Ice Arena.

“We played a lot better this weekend than we did the previous two weekends,” Fabbrini said. “As long as we can get back on track and win that first game, it puts us in a good position to win the series.”