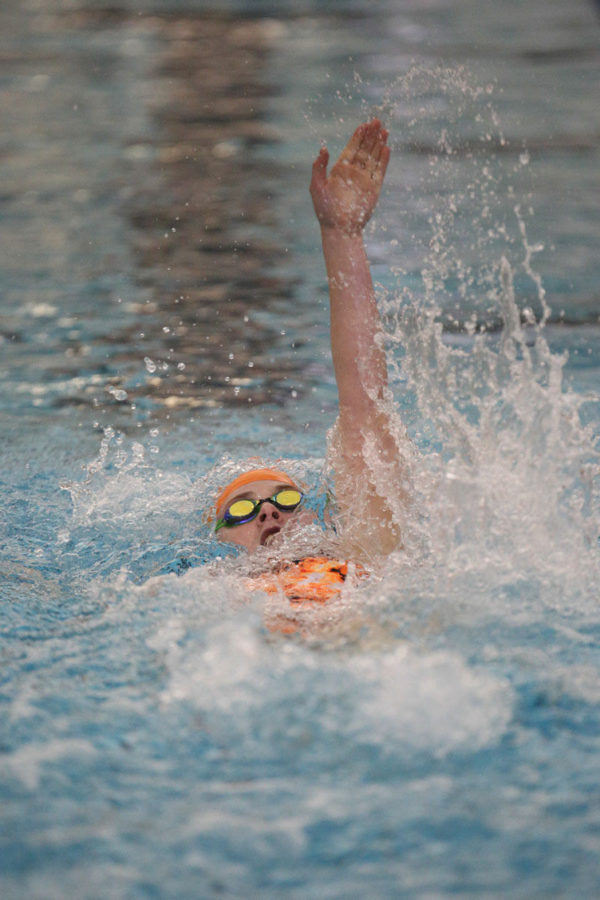 Illinois’ Samantha Stratford swims during the Orange and Blue Exhibition meet at the ARC, on Oct. 3. Stratford won four individual events this weekend.

Competing at home for the first time to begin the second half of the season, the Illini swimming and diving team split its weekend meets by defeating Iowa State 168-132 and losing 165-135 to Iowa on Friday and Saturday, respectively.

The meets also marked the Illini’s first competition in nearly two months due to the winter break.

“We were not as sharp as we will need to be in the coming weeks, but we can continue to address that in practice,” head coach Sue Novitsky said. “For the Iowa meet, we were definitely sluggish and at some points trying too hard.”

“We knew going into the weekend that it was going to be tough to compete in back-to-back duals,” Alison Meng said. “We came in with a positive attitude and swam strong throughout the span of the weekend.”

Freshman Samantha Stratford showed little signs of rust and picked up where she left off the first half the season, winning a combined four individual and two relay events. Her time of 2:04.31 in the 200 individual medley against Iowa set the ARC pool record.

Other notable achievements include Meng’s six event wins — three individual and three relays — and sophomore diver Olivia Kassouni’s and senior Erika Murphy’s performances in the 3-meter dive. In the 3-meter event against Iowa, Kassouni and Murphy recorded a 290.02 and 289.04, respectively, which qualifies them to compete in the NCAA Zone Diving Championship in March.

The Illini are now 4-4 on the year and have two more meets, which will also be at the ARC, before the Big Ten Championships in February.

“We’re excited to finally have the opportunity to swim at home,” Meng said. “The atmosphere at home is a lot more energizing and it will be good to have our home crowd for the last few tough duals.”

Novitsky said she will look for the team to use the home meets as a way to prepare for competing in tension filled and exciting situations.

“We will have to continue to work on competing and executing in pressure situations,” she said. “Our remaining schedule is only going to continue to help us heading into the Big Ten Championships.”

Daniel can be reached at [email protected] and on Twitter