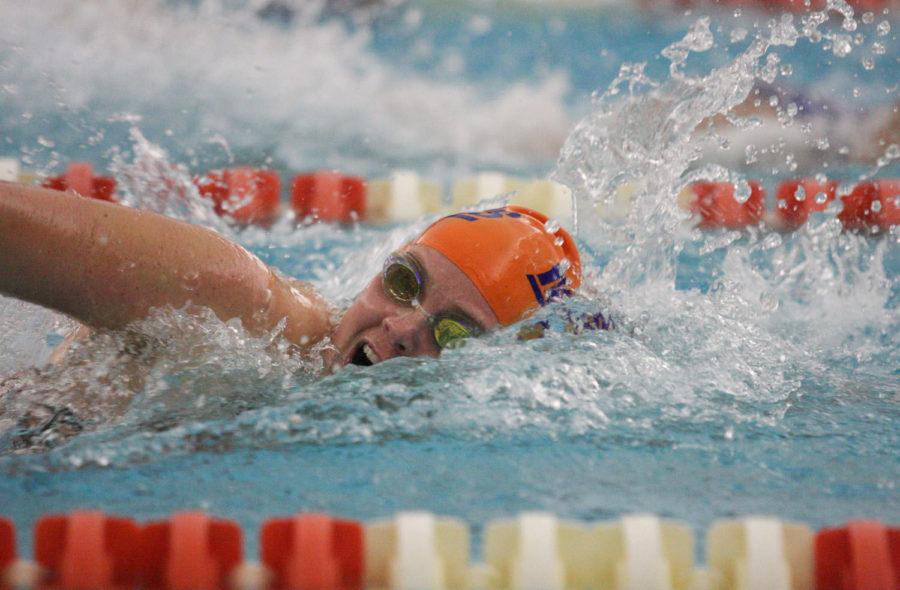 Illinois’ Callan McDermott swims during the Annual Orange and Blue Meet at the ARC on Oct. 3. Callan, a senior, is enjoying her last season swimming with her younger sister, Sloane.

Callan McDermott is accustomed to sprinting toward the finish line. However, in her senior season on the Illinois swimming and diving team, she will go through the year at the slowest pace possible, trying to enjoy as many moments as possible with her sister and teammate, junior Sloane McDermott.

It all began at an early age for the McDermott sisters of Mokena, Illinois, who started swimming around the age of six.

Their mother, Lauri McDermott, was a swimmer at Illinois State, and introduced her girls to the pool at a young age.

“Of course, to me, (swimming) seemed like a good route to take with the girls,” Lauri said.

The two were involved in other sports and activities, like softball and gymnastics, but it seemed to be the water that always attracted them.

“Even on summer days when the weather was cool, they would be unaffected and we could never get them out of the water,” their father, Jack McDermott said. “On those types of days, sometimes they would be the only ones swimming and having fun, oblivious to the air and water temperature.”

Eventually the sisters went on to swim at Lincoln-Way East Hich School, but a year before entering high school, Sloane’s swimming days were halted by a car accident.

The accident left Sloane with three broken vertebrae in her back and left her in a brace for four months.

“We weren’t sure if she was going to swim again,” Jack said of her recovery. “It was a slow process for her.”

It took her roughly a year and a half before she could compete again.

Even though she couldn’t swim for her high school team, Sloane remained in the pool and swam as a form of rehab.

“She never complained,” Jack said. “She was going day-to-day . . . we’re very thankful that she was able to come back from an injury like that and continues do what she loves to do.”

Sloane said one of the hardest parts about the injury was not being able to compete with her sister, who was there to lend a helping hand any way she could.

“Cal would help me get my shoes on, with my homework that I missed and help me not lose sight of my goal, recovering from the injury,” Sloane said.

Once her rehab was complete, Sloane joined her sister again in the pool as a teammate.

When Sloane arrived in Champaign in 2012, Callan already was one year ahead of her on campus.

Callan took no time in helping her sister adjust to life away from home.

“Callan called me when I was sitting in my dorm room, it was raining and I couldn’t hear but she said, ‘Put messy clothes on and meet me at Frat Park to play in the mud,’?” Sloane said, reminiscing back to her first semester on campus.

After briefly getting lost trying to find the park, Sloane eventually arrived.

“It was nice to join in because I didn’t have that many friends and I wasn’t that comfortable yet,” Sloane said. “Then I had to take three showers to clean the mud out of my hair.”

Swimming together in college has kept the McDermott sisters close. At times, they don’t need words to get each other’s message across.

“Without even saying anything, we can look at each other and know what we’re feeling,” Sloane said.

This will be Sloane’s third year competing with her sister at the collegiate level, something the sisters have been familiar with their whole life. Until this season, they have also competed with their older sister, former Illini diver Darragh McDermott, who graduated last year and is now serving a one-year stint teaching English and coaching swimming in Taiwan.

While a 14-hour time difference separates them, Darragh still finds the time to send her sisters a text message before their meets. Somewhere within the body of the message, the sisters always find the words, “good luck.”

At the end of the season, Callan will compete in her last event. She’ll make her last turn in the pool and sprint toward the finish. As she makes her way to the finish, she’ll extend her arms, touch the wall and her time swimming with the Illini will expire.

At that moment, she’ll rise from the pool, remove her goggles and once more look at Sloane and send her a message that neither need words to understand. The message will be, “It’s over.”

The following season, Sloane will swim for the Illini for the first time without her sister Callan. Odds are that when she arrives to her first meet, there’ll be a text message not only from Darragh but from Callan as well. She’ll read the message and somewhere within the body of the message read the words, “good luck.”