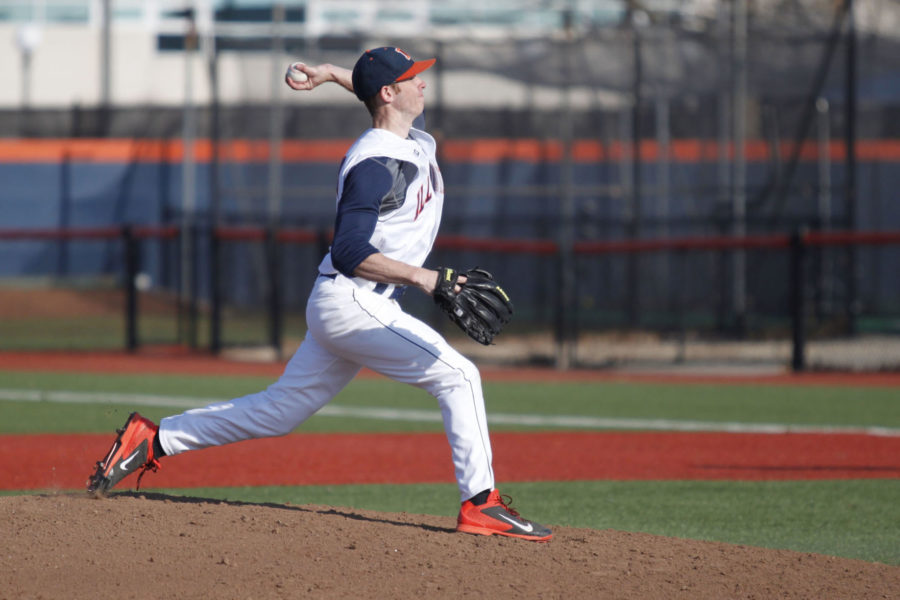 Illinois' Tyler Jay (11) pitches the ball during the game against Indiana State at Illinois Field on Mar. 18. The Illini's veteran team has led to high expectations for the upcoming season.

As reporters inside the Irwin Indoor Facility surrounded Kevin Duchene during Illinois baseball’s media day Monday, he was asked what it was like to be heading into his junior season with an experienced team. A certain confidence came from the 6-foot-2 pitcher in what he said next.

“You can tell that there’s a different sense of demeanor around us,” Duchene said. “This is a team that has high aspirations of winning. This team is going to have the potential of achieving a lot this year, and we showed it on Day One.”

This year’s team is filled with mostly upperclassmen, as Illinois lost only three of its 19 pitchers and has all of its starting position players returning. With such a veteran team, head coach Dan Hartleb is aware of the high expectations, especially for a pitching staff that he called the best he’s had at Illinois.

Despite high expectations, Hartleb knows there is a difference between a veteran team and a young team. The first priority for the program is always to win. With a veteran group, there isn’t just an expectation to win but also the knowledge of how to do it. Young players don’t always know what to do in certain situations, the veterans do.

After a short postseason run last year — just three games in the Big Ten tournament — the Illini head into the season ranked No. 38 in the nation by PerfectGame.org and No. 40, according to NCAA Division I Collegiate Baseball’s Fabulous 40. The team knows that the rankings don’t mean much if the team doesn’t prepare for every game physically and mentally.

A veteran team means that players are familiar with each other and fewer adjustments need to be made. During the first practice of the season, Hartleb expected his team to be a little rusty and make mistakes. Instead, he was surprised to see few errors and was impressed with how sharp the team looked.

Much of that has to do with all eight starting position players returning from last year. Drills are smoother because the players are familiar with each other and know what to expect under certain circumstances.

That familiarity could be key to the Illini not only getting off to a quick start but also making a run in the Big Ten tournament and the NCAA tournament.

“(It’s) real important,” senior center fielder Will Krug said of having so many returning position players. “Everyone just knows how everyone else operates and that’ll just help us not only in the beginning of the season … but also in the long run.”

Despite the good feeling surrounding the team, Hartleb knows that relying on being a veteran team doesn’t guarantee wins. He’s had three or four teams with the same type of leadership and returning starters. It’s a long season filled with injuries and ups and downs. If the team wants to succeed and live up to all the preseason hype, it’s up to the players to do their jobs.

“The veteran portion is good if we take care of business and go about things the right way, and to this point, we have,” Hartleb said. “You have to be optimistic, but cautious.”

Michal can be reached at [email protected] and on Twitter @mdwojak94.