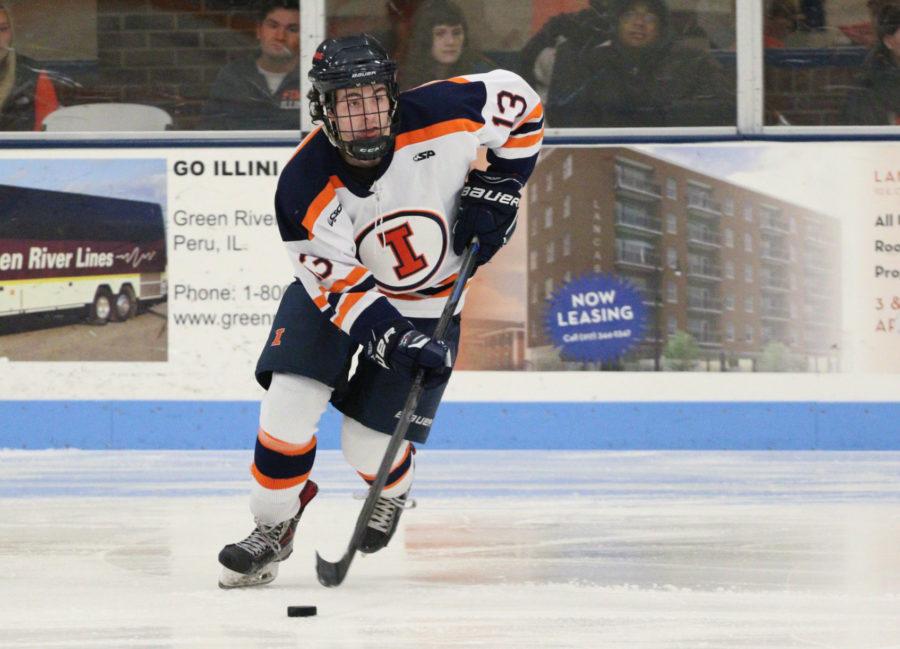 Illinois’ James McGing looks for an open pass against Robert Morris at the Ice Arena on Jan. 24. The Illini snapped a five-game losing streak this weekend against Oklahoma.

The Illinois hockey team’s advantage in power-play goals is what made the difference in a weekend sweep of Oklahoma.

The Illini scored one power-play goal on Friday and two on Saturday, while keeping the Sooners from scoring on five power-play attempts over the weekend. llinois did, however, allow a penalty shot on Friday after left wing Eric Cruickshank threw his stick at Oklahoma’s Cory Ramsey on a third period breakaway. But the goal had little bearing on Illinois’ 4-2 victory.

According to left wing James McGing, a major reason Illinois had so much success on the power play was because the Sooners were giving them time to set up. Mcging scored Illinois’ last goal on Saturday to give the team a two-goal cushion, which ended in a 5-4 win.

“It might have been because they couldn’t adjust to our rink, but there was never any pressure,” McGing said. “A lot of times I would look over my shoulder worried someone (was) going to try to hit me, and there was never anybody there. It felt like they made it easier for us to set up our power play. We just outplayed them down low the whole weekend.”

Grumet-Morris filled in for Olen

In the absence of starting goaltender Joe Olen, Zev Grumet-Morris did his part to secure Illinois’ two weekend victories.

Grumet-Morris eased the pressure on the offense by making 27 saves on 29 shots Friday, but struggled more on Saturday, allowing four goals on 21 shots. Head coach Nick Fabbrini gave credit to both Grumet-Morris and the defense for containing the Sooners for the majority of the series.

“The defensive zone was actually really good,” Fabbrini said. “They like to set up a cycle and use their big bodies to create shots.”

Illinois will be without Olen for another weekend. He and his brother John are playing at the World University Games in Granada, Spain, which end Feb. 14.

The Illini have struggled early into this semester to generate consistent wins, and Fabbrini is hoping this past weekend can build momentum moving forward.

The Oklahoma series marked the second of three weekends that the Illini play at home. The team came into the weekend with a 2-6 record since the semester break with the CSCHL tournament less than a month away.

Fabbrini complimented his team for its resilience after recent struggles, which included a five-game losing streak. He hadn’t seen a consistent effort from his team in a while, and it will need to continue when the team takes on division rival Lindenwood this weekend.

“We are happy with the contributions we got up and down the lineup all weekend,” Fabbrini said. “All four lines scored this weekend. When we’ve got everybody chipping in like that, we are a really good hockey team.”