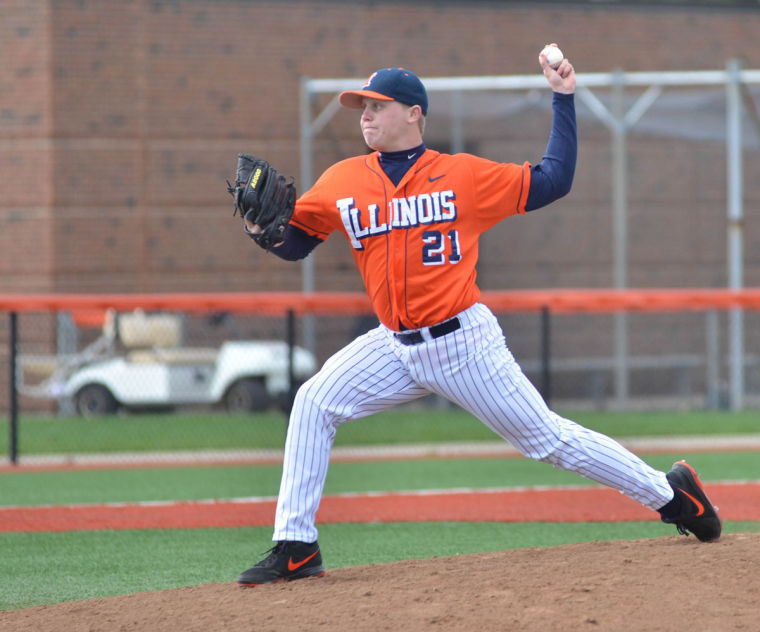 Kevin Duchene pitches against Purdue on April 13, 2013. Duchene is heading into his junior season pitching for Illinois.

Cape Cod is a sandy stretch of the Massachusetts coast that is one of the most popular summer vacation spots in New England.

It’s also where Illinois pitcher Kevin Duchene spent his summer, pitching in the Cape Cod League. The junior pitcher was Illinois’ top starter in 2014, before he was sidelined for six weeks with forearm tightness.

This summer, Duchene pitched for the Yarmouth-Dennis Red Sox, the Cape League’s 2014 champion. The Cape League is a college-only summer league with 10 teams made up of some of the top college players from around the country.

Duchene picked up the win in the championship-clinching game for the Red Sox, who swept the Falmouth Commodores in the best-of-three championship series. Duchene went 2-0 with a 1.35 ERA in the postseason after finishing 3-3 with 37 strikeouts and a 3.37 ERA in eight regular season starts.

Duchene said the highlight of his time in the Cape League, besides the championship victory, was the relationships he made. Players stay with host families on the Cape for the two months.

“I stayed with the very best guy I’ve ever met in my life,” Duchene said. “He was telling me stories how he used to (host) Chris Sale, who stayed in the same room as I did.”

Sale, who pitches for the White Sox, was a first-round draft pick. He is a three-time American League All-Star, and finished third in AL Cy Young voting this season.

Illini closer Tyler Jay and Illinois catcher Jason Goldstein were also supposed to play for the Y-D Red Sox, but Jay was called up to Team USA and Goldstein went home after getting injured, forcing Duchene to make new friends.

“I have a pretty close bond with the catcher from San Diego, Jesse Jenner,” Duchene said. “That guy was the best. Just about every night after a game we’d go out to dinner and go to Pirate’s Cove mini golf: I got pretty close to breaking Buster Posey’s course record.”

“If we had lost the first series (of the playoffs), we would have had 13 days of summer,” Duchene said. “Our staff and our team took it upon ourselves to say, ‘Hey, this is our time to put a fingerprint on history.’?”

Pitching coach Drew Dickinson said Duchene was on the short list for Team USA last spring until he was out during the Illinois season with forearm tightness. Duchene said he expects to go back to the Cape League next summer, unless a better opportunity presents itself.

“I had the greatest summer up there,” he said. “I wouldn’t trade that experience for the world.”

Peter can be reached at [email protected] and on Twitter @PBaileyWells.